Dogs and seals can injure or transmit diseases to each other. Keep dogs leashed to keep them safe and monk seals protected. 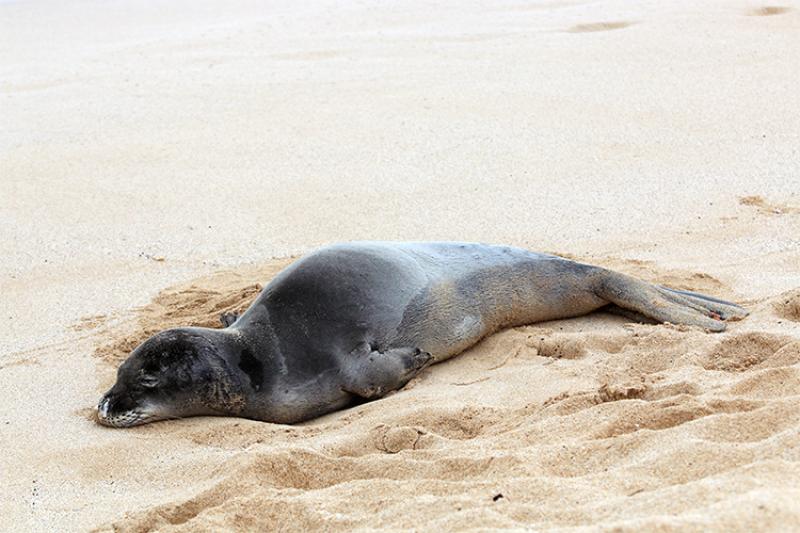 A 3-year-old male Hawaiian monk seal, RK58, was recently transported from Kauaʻi to Hawaiʻi Island for medical treatment at The Marine Mammal Center’s monk seal hospital, Ke Kai Ola. RK58 was found in a weak, dehydrated condition with numerous infected puncture wounds. He had also lost significant weight. Based on the seal’s appearance and the location of his wounds, we believe RK58 suffered a dog attack and was struggling to recover from the resulting injuries. Larger male monk seals occasionally inflict bite injuries on other seals; however, the wound characteristics do not match wounds typical of male aggression.

NOAA’s Marine Wildlife Hotline operators on Kauaʻi routinely receive reports of off-leash dogs harassing resting monk seals. This includes a recent report of a large dog viciously attacking and injuring a monk seal resting on a beach. We were not able to determine the seal’s identity at the time, but we suspect RK58 is the seal injured in that reported dog attack.

Kauaʻi County law states that all dogs on public lands (including public beaches) must be on a leash or other restraint no longer than 8 feet at all times. Refer to your county guidelines for more information on local leash laws.

Off-leash dogs have killed numerous native Hawaiian wildlife, including nēnē (Hawaiian geese), Laysan albatross, shearwaters, petrels, shorebirds, and monk seals. In 2014, a 2-week-old seal pup died during a devastating dog attack on three Kauaʻi monk seal mothers with their pups. Two mothers and two other pups also suffered bite injuries, some of which required treatment on the beach. The dogs likely responsible for the attack were live-trapped and surrendered to the Kauaʻi Humane Society.

Kauaʻi is not the only island where dog-seal interactions are reported each year. We strongly encourage pet owners statewide to protect native wildlife by adhering to leash laws. We also seek the support of all residents to help protect the state’s vulnerable wildlife from off-leash pets. 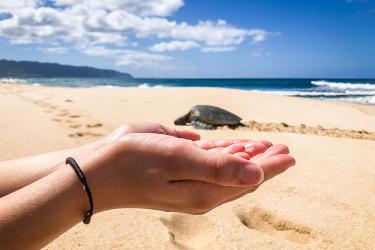 One example of how you get great photos of sea turtles while remaining a respectful distance of at least 10 feet away. Credit: Levon Basso.
More News