NOAA and partners built new rocky reef habitat that will provide healthy homes for fish and marine life. This is one of many Southern California projects restoring wetland, reef and other habitats polluted by DDT and PCBs. 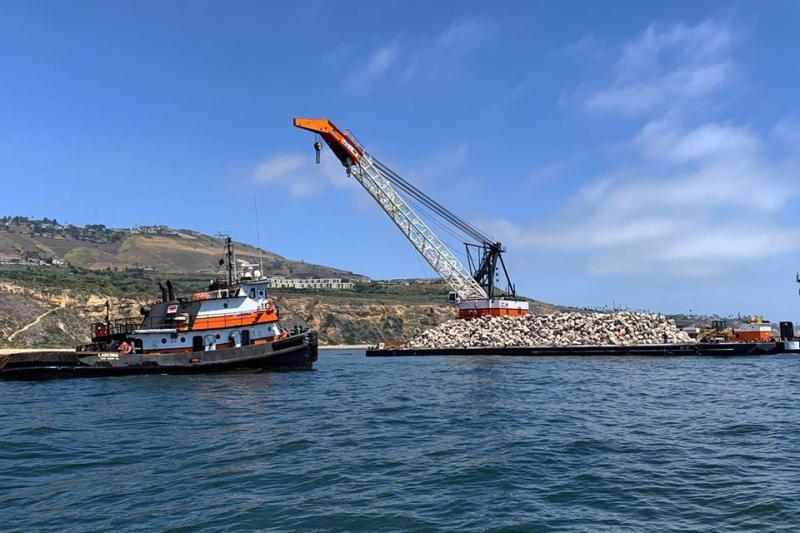 A barge of the large rocks for the reef is moved to the project location early during construction in May. Image: Chelsea Muñoz Williams/Vantuna Research Group

This fall, we completed one of the final projects restoring Southern California habitat from chemical pollution impacts at the Montrose Superfund site. NOAA and partners restored 32 acres of reef habitat in an area where old reefs were buried in underwater landslides and sediment is contaminated with DDT and other toxins.

The reefs will help fish and other marine life avoid the polluted sediment, promoting growth of additional healthy habitat like kelp forests. Rocky reefs are known to be nurseries for younger fish to grow, and are much more productive than soft-bottom areas. The new reefs are already supporting a diversity of fish species. Additionally, the reefs ascend high enough off the seafloor that they’ll avoid being buried by landslides in the future—a win-win for the local marine ecosystem.

The project involved strategically placing more than 70,000 tons of quarry rock on the ocean bottom just offshore of the City of Rancho Palos Verdes.

Construction on the project started in May 2020 and was completed in October. NOAA’s restoration scientists spent years in the planning, permitting, and monitoring phases to ensure the project was technically thorough. We also engaged the community before construction to ensure local stakeholders had input.

Our partners at the Southern California Marine Science Institute and Vantuna Research Group were key to the project’s success. They supported the permitting process and led field work during construction, especially when NOAA staff weren’t able to due to the global pandemic. The Institute is also the long-term steward of the reefs to keep them healthy in the future.

A History of Chemical Contamination Followed by Eventual Restoration

Along with landslides, chemical pollutants impair hundreds of acres of fish habitat on the Palos Verdes Shelf. They impact the entire food web in the area and get into the bodies of fish and other marine species as they eat food living in the sediment. Humans—as well as eagles, seabirds, and other wildlife that consume the fish—get them too, in higher concentrations, contributing to a host of health issues.

In the 1940s through 1970s, millions of pounds of DDT and PCBs were pumped into ocean waters off the southern California coast. Chemical plants from that area and throughout Los Angeles released its wastewater through a pipe offshore, and the chemicals settled onto the Palos Verdes Shelf. The chemicals are extremely difficult to remove, and hundreds of tons are still in sediment on the ocean floor.

The project was funded by a $64 million settlement reached with the Montrose Chemical Corporation and other industrial companies in 2001. The companies are responsible for putting harmful pollutants, like DDT and PCBs, into waters off the southern California coast. The State of California also contributed funding.

This is the last of almost 20 restoration projects that have been completed for the Montrose settlement. NOAA and partners have also worked to restore kelp forest habitat and migratory seabirds in the area. Additionally, we restored 500 acres of critical coastal marsh habitat in Huntington Beach. That includes 140 acres at the Talbot and Brookhurst Marshes. Before restoration those areas hadn’t been accessible to fish and wildlife for 100 years. 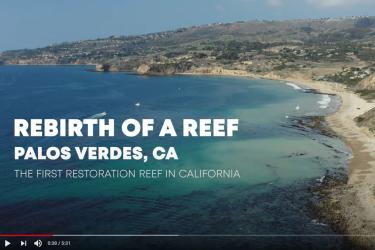 Watch the Rebirth of a Reef: Palos Verdes Reef Restoration Project video from partners at the Vantuna Research Group


(Image is not clickable)

Last updated by Office of Habitat Conservation on October 05, 2021