Study finds that females often give up foraging when vessels approach. 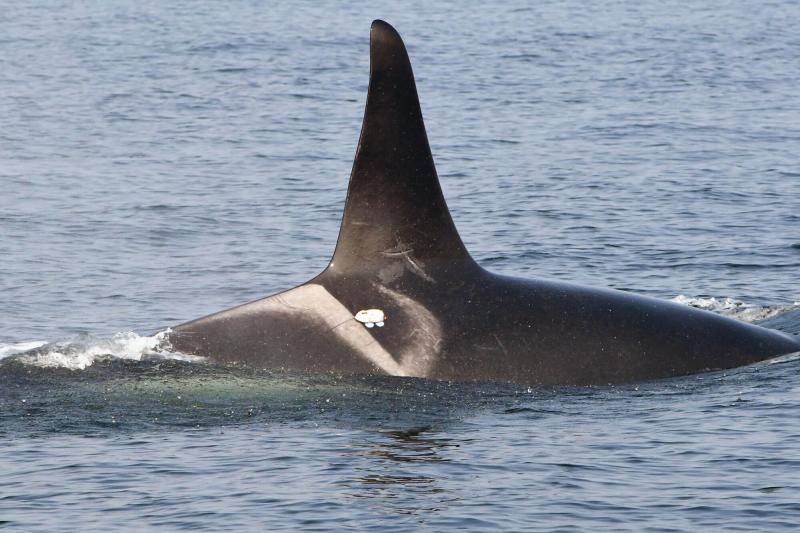 Boat traffic within 400 yards of endangered Southern Resident killer whales interrupts their foraging, often leading female whales to cease feeding altogether. That is a key finding from a new analysis of data from suction-cup tags that track the whales’ movement underwater.

Previous research observed surface behavior of the killer whales in response to vessels, while the tags allow researchers to discern their behavior during extended dives underwater. This data shows that nearby vessel traffic inhibits their underwater foraging as much or more than what scientists previously documented at the surface. These new results were published in Frontiers in Marine Science.

“We found a bigger effect in females, and that effect was more often that they gave up foraging if vessels encroached on them,” said research scientist Marla Holt at NOAA Fisheries’ Northwest Fisheries Science Center. The analysis examined whale behavior over 3 years. It included years before and after the 2011 enactment of federal regulations limiting how close vessels can approach killer whales in Washington’s inland waters.

The outsize effect of vessel traffic on female whales “could have cascading effects on the ability to meet energetic requirements to support reproductive efforts,” the scientists reported. “This is particularly concerning in an endangered population that is in decline.”

Two of the three pods of Southern Residents often spend winters along the remote outer coast, with the third pod wintering in remote portions of the Salish Sea. All three have historically spent much of the summer in Puget Sound and the Salish Sea, where vessel traffic commonly accompanies them. Vessel monitoring by The Whale Museum’s Soundwatch Boater Education Program regularly conducts counts of vessels around the whales. They found an average of 10 or more vessels and sometimes as many as 80 vessels, including commercial whale-watch cruises, around the whales at one time.

Current Washington state regulations require vessels to stay at least 300 yards to either side of killer whales and no less than 400 yards in front of and behind them in Washington state waters. U.S. federal regulations require vessels to stay at least 200 yards away from killer whales in Washington’s inland waters. A 2017 review found that compliance could be improved. From the tag recordings, the new study analyzed the movement and sound of the whales underwater. The data revealed their behavioral states, such as searching for prey using sound and deep foraging.

When nearby vessels approached within 400 yards, on average, both male and female whales foraged less, the study found. The whales made fewer dives and spent less time in a deep foraging state that involves the capture of Chinook salmon and other salmon prey.  This effect was more substantial in females.

“These findings suggest that deep foraging opportunities can be enhanced when vessels give whales, especially females, more space,” the researchers wrote.

Female killer whales can weigh a few tons less than males, so they lack the same capacity for extended dives. Females are also more likely to be associated with smaller, younger whales, including their offspring that tend to stay in shallower waters. That leaves them less space to maneuver in response to vessel traffic.

The new results may help scientists understand previous findings showing that male killer whales spent more time foraging and captured more prey than females, said Jennifer Tennessen, a Research Scientist with Lynker in support of the Northwest Fisheries Science Center and an author on both studies.

The limited dive capacity of female whales and the more pronounced effects of vessels combine into a kind of “double whammy” for the females, Holt said. Vessel traffic may also disrupt prey sharing that can help sustain lactating females with calves that have greater energetic requirements.

It’s not clear just why the whales forage less as vessels approach. Boat noise may mask the echolocation clicks they use to find prey, or they may perceive vessels as a threat, Holt said. The effects may be most serious for pregnant or nursing mothers that must support calves.

That is “particularly concerning” for the endangered Southern Residents, now numbering 74 whales, the scientists said. Females produce calves only every 3 to 7 years, and reproduction is essential for the dwindling population to have any hope of recovery. Analyses of Southern Resident reproduction for their most recent status review indicate that at current rates, the population will continue to decline in coming decades.

Given such a small population, even slight changes in the number of births can greatly impact the population’s future, the scientists noted.

NOAA Fisheries has designated Southern Resident killer whales as one of nine national “Species in the Spotlight,” with potential for focused protection to stabilize their decline. We plan to release an updated Action Plan for the species in early 2021.