NOAA Fisheries responded to a dead 12-foot-long humpback whale calf on Oʻahu on February 6, 2022. The injury was likely caused by a vessel strike. 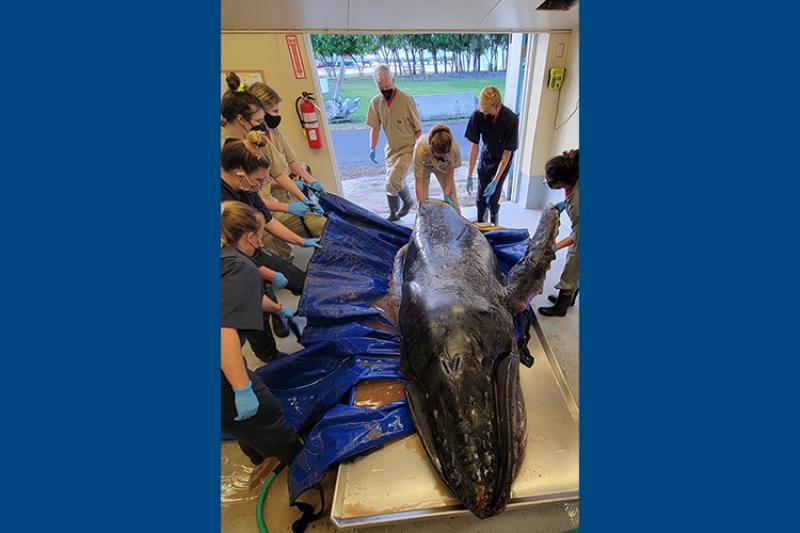 NOAA Fisheries responded to a dead humpback whale calf on February 6, 2022, near the Wailupe peninsula, Oʻahu. NOAA’s marine mammal response staff worked together with the University of Hawaiʻi (UH), Hawaii Marine Animal Response, and native Hawaiian practitioners to respond. They removed the approximately 12-foot-long carcass from the reef flat. The UH team from the Hawaiʻi Institute of Marine Biology transported it to the Health & Stranding Laboratory for a postmortem exam.

What Is a Vessel Strike?

A vessel strike, also referred to as a ship strike, is a collision between a boat and a marine animal in the ocean. Vessels of any size and type can strike and kill or injure marine life. Collisions can occur anywhere vessels cross paths with marine life but are more common in areas with both high vessel traffic and many animals. Strikes that result in death or injury to the animal may go unnoticed by the vessel operator or unreported to researchers that keep track of such incidents. The types of vessels include large boats, such as cargo ships, whale-watching boats, ferries, and military vessels, and private watercraft used for commercial and recreational purposes.

Vessel-whale collisions occur every year in Hawai‘i and are a serious risk to boaters and whales. Thousands of humpback whales migrate to the Hawaiian Islands in the winter months to breed, give birth, and nurse their young. Humpback whales, particularly calves, are challenging for vessel operators to see. They spend most or all of their time underwater and generally have a low profile when surfacing to breathe. The whale may not be able to detect a vessel, nor move out of the way of an approaching vessel. Even if a boat operator sees the whale clearly, there may not be time for either of them to avoid a collision.

NOAA Fisheries works with the Hawaiʻi Department of Land and Natural Resources and the Hawaiian Islands Humpback Whale National Marine Sanctuary. Together, we help spread awareness among the ocean-user community of guidelines that boaters can follow to reduce the chances of a vessel strike.

How to Avoid Colliding with or Disturbing Whales

Humpback whale season in Hawai‘i generally runs from November through May, with a peak in whale abundance from January through March. Vessel-whale collisions occur every year in Hawai‘i and are a serious risk to boaters and whales.

Always stay vigilant for whales and other collision hazards. Look out ahead for “blows” (puffs of mist), dorsal fins, tails, etc. Post at least one dedicated whale lookout in addition to the vessel operator from November through May.

Travel at a slow, safe speed in areas where you may strike a whale. This speed depends on vessel type, time of day, sea conditions, and other factors that affect whale detection and avoidance.

Stay at the Helm

Keep your hands on the wheel and throttle at all times, and be ready to take action immediately to avoid a whale in your path.

Once whales are sighted, stay more than 100 yards away. Federal regulations prohibit approaching within 100 yards of humpback whales in Hawaiʻi waters.

Stop If You’re Too Close

Stop immediately if you are within 100 yards of a humpback whale. Leave engines running and out of gear (in neutral) until the whale moves away.

Go Around Whales from Behind

If you encounter whales in your path, go around them from behind while maintaining more than 100 yards distance. Do not attempt to run out in front of whales to get past them.

If you spot a whale, use the appropriate VHF radio protocol or other means to alert other vessels that may not be aware of whales in their path.

Don’t Assume the Whales Can See You

Whales may not be able to see you, or may not get out of your way. Calves are especially vulnerable since they are curious and may not have learned to be cautious of vessels.

Be ready for delays in transit due to whale encounters. Avoid nighttime operations if possible.

In Hawaiʻi, if you observe or are involved in a collision with a whale or see a whale in distress, call the statewide NOAA Marine Wildlife Hotline: (888) 256-9840. If a phone call is not possible, hail the U.S. Coast Guard on VHF channel 16.