Scientists see an overall decline in Pacific cod and pollock productivity in the Gulf of Alaska as compared to recent decades. 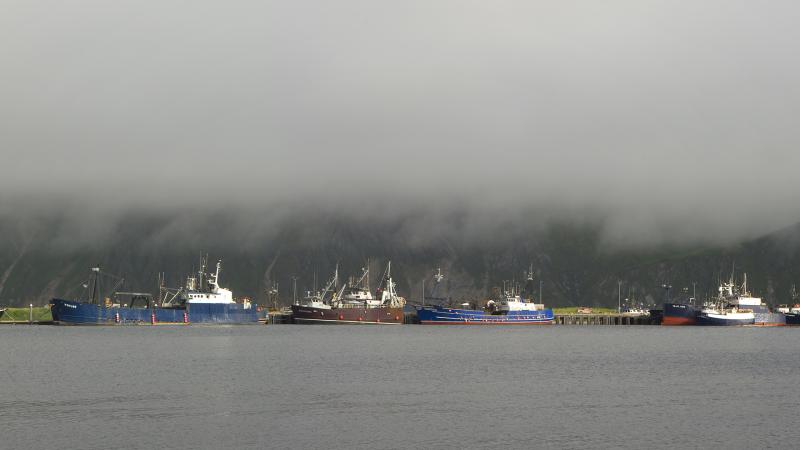 NOAA Fisheries scientists have developed a new modeling approach to evaluate changing fish population productivity in light of warming ocean temperatures. Fish stock productivity is determined by estimating the number of fish that survive from eggs and larvae to become adults annually.

Scientists used the approach to evaluate productivity for two important commercial fish stocks in the Gulf of Alaska. They found that for pollock and, especially, Pacific cod, sea surface temperatures in the Gulf of Alaska are already less conducive to successful fish development, growth and survival than in recent decades.

“A critical step in climate change adaptation is the ability to effectively evaluate the likely impacts on individual fisheries,” said Mike Litzow, Kodiak Laboratory Director, Alaska Fisheries Science Center, and lead author for this study. “We have to make inferences about how fish populations are likely to fare in ecosystem states that have never been observed before on short time scales - this decade and the next.”

In evaluating Alaska pollock and Pacific cod productivity in the Gulf of Alaska, scientists considered three pieces of information:

They used simple modelling techniques to compare current stock productivity with the recent past.

Specifically, they looked at how fish responded to the range of temperatures that could be expected under historical conditions, when human influences to the Gulf of Alaska climate were not so strong. They compared those historical responses to the level of productivity that we can expect from the cod and pollock stocks in the current climate, with stronger human influences on Gulf of Alaska temperatures. These results show how expectations for fisheries productivity can be adjusted to take the current effects of climate change into effect.

All fish populations experience some level of natural variability where there are years of high productivity and low productivity. In other words, where more eggs hatch and successfully reach adulthood than other years. There are a number of factors which affect this hatch success, larval and juvenile survival including prey availability, predation and water temperature.

Scientists distinguished between natural variability in these two fish populations and human-caused influences of climate change based on how they responded to changes in ocean temperatures. Both pollock and cod at different stages of development are more or less susceptible to warmer water temperatures.

Using this approach, the scientists projected a decline of between  38% — 88% in median Pacific cod and pollock recruitment (the number of larval fish to reach maturity) for the 2020s.

Such a decline suggests a reduced likelihood of recovery for Pacific cod and increased likelihood of population declines for pollock. These projections suggest that maintaining sustainable fisheries for these populations are increasingly unlikely in the contemporary Gulf of Alaska.

“However, these projections must be viewed with some caution,” said Michael Malick, fisheries scientist, Northwest Fisheries Science Center and coauthor for the study. “Because other factors affect fish stock recruitment beyond just ocean temperature. Fish populations may also be able to adapt, move to new locations, or acclimate to warming temperatures.”

Temperature in the Gulf of Alaska also exhibits high levels of interannual variability, which leaves open the chance of a multi-year cooling event that could offer reprieve from the warming trend.

“Despite these qualifiers and likely variable short-term changes in environmental conditions, the general trend for the climate under the current level of carbon emissions levels is for continuing overall warming in this system. This may overwhelm any beneficial effects due to climate variability. So a reprieve would be best used to prepare for the negative outcomes suggested by the forward-looking perspective,” said Litzow.

Insights to Help Fishers Plan for the Future

For harvesters and processors, scientists hope this information will help them plan given the climate change effects that have already occurred. They can better weigh the risks versus the potential return on economic investments to participate in these fisheries.

For fisheries scientists and managers, the hope is that this new approach will help them better understand whether assumptions of long-term average conditions that describe population processes still hold true or whether a change in management approaches is warranted.

“We want to provide fishers and resource managers an early warning to allow time for actions to be taken to preserve important fisheries for as long as possible. At the same time, we want to provide information that may be useful for helping new fisheries to develop,” said Malick.

In developing this new approach, Litzow and his colleagues hope to continue work by other scientists and managers. They want to provide a way to promote resilience in fisheries to climate change.

“We are hopeful that this approach will be another useful tool. It will help scientists and managers anticipate how different fish populations will respond under different climate conditions so they can plan and adapt,” said Litzow.