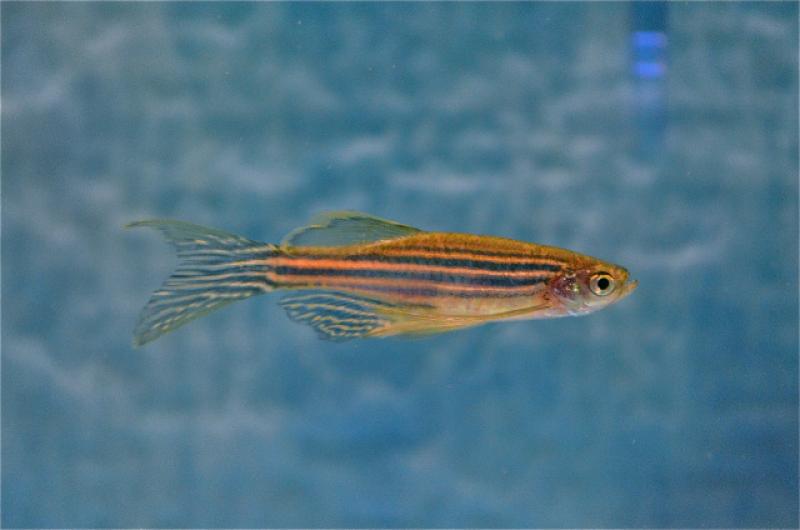 In a study published May 2, 2012, NWFSC scientists Kathi Lefebvre, Elizabeth Frame, and Preston Kendrick, together with several collaborators, discovered an antibody in the blood of zebrafish and marine mammals that shows when they have been repeatedly exposed to low levels of a neurotoxin called domoic acid.

“This study paves the way for creating reliable blood tests for low-level domoic acid exposure, which could help scientists assess the effects of chronic exposure to both wildlife and people who eat seafood,” said Lefebvre, lead author of the study.

What is domoic acid?

This toxin is produced naturally during blooms of a particular species of marine algae, and can accumulate in shellfish, crabs, and fish. Humans who consume seafood with high levels of domoic acid can suffer from amnesic shellfish poisoning, characterized by seizures, memory loss, coma and, in rare cases, death. Each year, hundreds of California sea lions are also exposed to domoic acid and its adverse health effects by ingesting contaminated fish. In 1998, more than 400 California sea lions died on the U.S. West Coast after consuming anchovies containing domoic acid.

Since the early 1990s, regular monitoring of shellfish has protected people from amnesic shellfish poisoning caused by high levels of domoic acid. However, several coastal and tribal communities in the Pacific Northwest rely heavily on shellfish like razor clams as a food source, which can accumulate and retain low levels of domoic acid for long periods. Currently, there is no available diagnostic test for chronic, low-level domoic acid exposure in humans or wildlife.

In the NOAA study, scientists injected zebrafish in the laboratory two to four times a month over a nine-month period with low levels domoic acid. Although the zebrafish appeared healthy after 18 weeks, scientists detected an antibody response for domoic acid in blood samples. Scientists found a similar antibody response in blood samples taken from wild sea lions from central California, confirming that natural exposure to the toxin produces a similar response in marine mammals.

Scientists also found that long-term, low-level exposure to domoic acid does not build tolerance or resistance to it, but instead makes zebrafish more sensitive to the neurotoxin.

“The findings of this study represent a significant advancement in the tools for addressing the impact of chronic domoic acid exposure on wildlife and potentially human health,” said Dr. John Hansen, research immunologist for the USGS and a co-author in the study.

Up until now, the absence of a biomarker for chronic exposure has been a barrier for assessing the possible effects to humans.

“We don’t know yet if the same antibody response we found in the laboratory in zebrafish and naturally exposed California sea lions also occurs in humans,” said Lefebvre. Our next step is to team up with human-health experts to answer that question.”

Dr. Lefebvre will continue to work with co-authors John D. Hansen, Ph.D, an immunologist with the U.S. Geological Survey-Western Fisheries Research Center, Donald R. Smith, Ph.D., a toxicologist at the University of California at Santa Cruz, and David J. Marcinek, Ph.D., a physiologist at the University of Washington, to look for health consequences of low-level exposure to domoic acid using the antibody marker.

The current study, “A Novel Antibody-Based Biomarker for Chronic Algal Toxin Exposure and Sub-Acute Neurotoxicity,” was jointly undertaken by scientists with NOAA, the Marine Mammal Center, the U.S. Geologic Survey-Western Fisheries Research Center, the University of Washington, and the University of California Santa Cruz. Funding was provided by NOAA’s Ecology and Oceanography of Harmful Algal Blooms (NOAA-ECOHAB) program.

Bringing the science of seafood toxins to students

Over the next year, Kathi Lefebvre and NWFSC’s Education Coordinator Casey Ralston will be working to bring the latest science on seafood toxins like domoic acid to middle-school students. Together with Seattle Public School District science specialist Christine Benita, Lefebvre and Ralston will develop lesson plans and a video as part of an educational kit to help students learn about plankton, understand how HAB toxins move through the marine food web and identify the impacts on seafood safety and wildlife/human health. These lesson plans will be tested in a 6th grade environmental science class at the Jane Addams K-8 School in Seattle. Stay tuned for more information regarding this and other educational projects that bring NWFSC’s science to the classroom.