We are working with the dam owners to improve fish passage for river herring and American eels on a tributary of the Kennebec River in Gardiner, Maine. 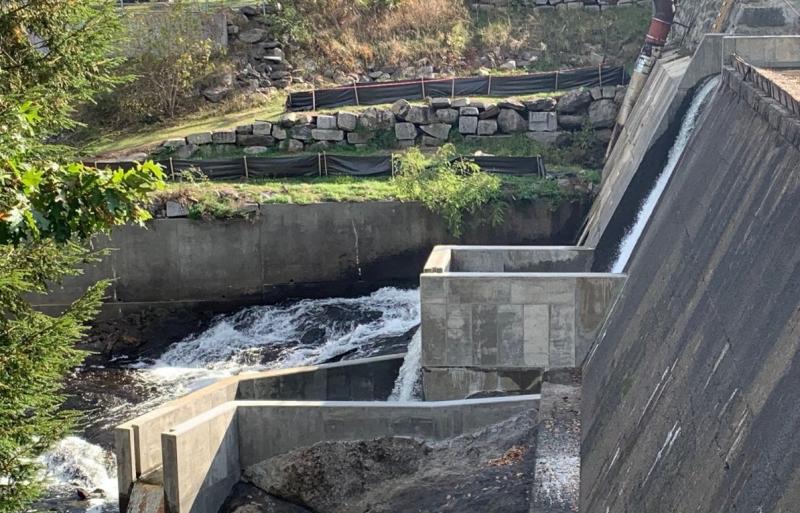 The improvements to the plunge pool at the base of the dam will improve survival of river herring and other sea-run fish. Credit: Steve Brooke

Gardiner, Maine is a quiet city of 6,000 people located on the Kennebec River. A successful Boston physician, Dr. Silvester Gardiner, founded the city in 1754. Dr. Gardiner was part of a group of wealthy Boston merchants who purchased rights to develop land along the river.

Dr. Gardiner realized the potential to harness power where the Cobbossee Stream drops 130 feet over the last mile before it enters the Kennebec River. The Abenaki people, who lived in this area and traded furs with the settlers, called this stream the Cobbosseecontee, which means “river of many sturgeons.”

Dr. Gardiner was a loyalist and escaped to England during the American Revolution, but the city named for him continued to prosper in his absence.

The settlers built mills along the stream, and the settlement grew from about 1,000 people in 1819 to more than 6,500 in 1845. From the beginning of the 19th century until the Civil War, the city was a center for shipbuilding and trade. They built eight dams on the river to power mills that produced grain, paper, lumber, and other wood products.

By the 1960s, the mills had all closed, but three of the dams still remained. The upstream dam, the New Mills Dam, controls the water level on Pleasant Pond and on Cobboseecontee Lake, the source of the stream.

The middle dam, the American Tissue Dam, produces a small amount of electricity. The company Kruger Energy Inc. (KEI) holds a license from the Federal Energy Regulatory Commission to operate the dam and generate electricity. The downstream dam, the Gardiner Paperboard Dam, is a privately owned old granite dam built in 1840.

The Cobbosseecontee watershed covers an area of 217 square miles and contains ideal spawning habitat for river herring. Unfortunately, the fish can’t reach this habitat due to these three dams in Gardiner.

Fish in the Rivers

River herring and American eels are an important part of river ecosystems. They provide forage for birds, mammals, and other fish, including sought-after recreational species like small-mouth bass and stripers.

The Maine Department of Marine Resources stocks 5,000-10,000 adult river herring above the dams each year. In the fall, the juveniles travel downstream to make their way to the Kennebec River and finally to the Gulf of Maine. Cobbosseecontee Stream also provides habitat for American eels that migrate upstream in the spring as “elvers.” These young eels are harvested and exported to Asia as seed stock for the aquaculture industry.

From 2014 through 2019, NOAA Fisheries staff from the Greater Atlantic Region consulted on the relicensing of the American Tissue Dam. As part of the Federal Power Act, NOAA Fisheries may require fish passage at federally licensed dams, which was the case for this dam.

In order to comply with this requirement, KEI was busy this summer and fall constructing a new and improved downstream fishway. When migrating fish pass over a notch in the dam, they will now enter a well-designed plunge pool. The pool does a better job reducing fish mortality than the old plunge pool, particularly for the small juvenile river herring. Additional passage improvements to this project will include an eel ramp to help juvenile eels migrate upstream. A submerged pipe will help adult eels headed downstream to get up and over the dam and back down to the river channel safely. With these fish passage improvements, we are optimistic that restoration of fisheries resources in Cobboseecontee Stream can succeed.

If the restoration efforts at all three dams are successful, they will go a long way towards restoring sea-run fish populations on Cobbosseecontee Stream. The new plunge pool and eel ramp at the American Tissue Dam are a first step in this process.