An important aspect of sustainable aquaculture is understanding the interaction between the local environment and an aquatic farm. 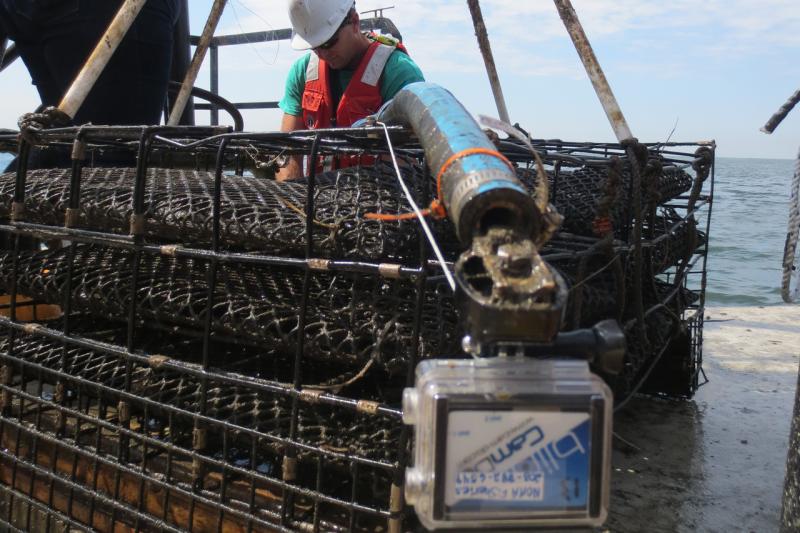 An important aspect of sustainable aquaculture is understanding the interaction between the local environment and an aquatic farm. The NOAA Fisheries Milford Laboratory is a global leader in aquaculture research and this year researchers are using cutting-edge technology to study the interactions between oyster farm gear and wild species.

On aquaculture farms around the country, oyster growers use cages to protect shellfish from predation and reduce the farm’s footprint. However, can these underwater cages do more? That is what the Milford staff are trying to find out. Weekly from May to September Milford Lab staff board a NOAA research vessel equipped with GoPro cameras and water collecting gear to examine oyster cage gear. “We know that shellfish aquaculture can improve water quality through ecosystem benefits provided by shellfish filter-feeding, but we also have anecdotal evidence that shellfish farms provide important habitat for wild species,” said NOAA Fisheries research ecologist Julie Rose.

Talk to any oyster farmer and they will tell you that they often encounter juvenile fish, crabs, snails, and other marine life in their oyster cages. But how do we measure these underwater interactions? That is where Milford researchers are hoping GoPro cameras and eDNA can help. Throughout the project the team at Milford relied on strong industry partnerships to ensure their work, aquaculture gear, and cage set-up reflected current shellfish aquaculture technology.

“The logistics of this project require a lot of ingenuity,” said biological technician Gillian Phillips. “We are not working in a lab; we want to document real world examples of oyster gear interactions, and that means our monitoring equipment needs to work in tides and areas of varying turbidity.” Technician Dylan Redman designed, constructed, and tested a variety of field equipment, such as mounting systems for the cameras that optimized the field of view and allowed researchers to document fish interactions with the cages. After initial trials, one of the first design changes made to the GoPro cameras was the addition of magenta-tinted filters to reduce green coloration of the water caused by natural phytoplankton and to improve visibility of fish on film. These modified cameras were deployed on oyster cages to document fish interactions in and around the aquaculture gear. Cameras were also mounted to small T-shaped platforms to allow video recording of natural rock reef habitat and featureless areas. These three habitat types were selected so that footage can be compared between traditional fish habitats and oyster cage gear to assess ecological services provided by each area. Ecological services can range from providing food sources for fish to protection from predation to refuge from strong currents.

Camera equipment was deployed aboard the research vessel Victor Loosanoff, captained by LTJG Erick Estela, who is responsible for safe and efficient field operations and plays a key role in site selection for oyster cages and manipulation of gear on deck. When deployed each GoPro camera is set to record for 8-minute intervals on an hourly basis over a 12-hour tidal cycle. After deployment, the research team returns to collect the cameras and download the footage. In addition to the camera footage Milford staff also collect water samples from the study sites to document fish in the area that may not have appeared on camera. By examining environmental DNA, or  eDNA, scientists can detect organisms via samples of mucus, waste, scales, and gametes that are expelled to the surrounding environment. According to Dr. Yuan Liu, “the inclusion of eDNA technology can add additional information about the use of oyster aquaculture gear and expand our knowledge of community structure and even biodiversity of wild species around the area.”

After collection, the team analyzes video and eDNA in the lab. These datasets are used to examine what species of fish and other marine life are interacting with the oyster cage gear. The project is still underway but researcher Paul Clark, who has been reviewing video footage, has already observed adult fish using the oyster gear during courtship and juvenile fish using the structure for shelter. According to project co-lead Renee Mercaldo-Allen, “Video from GoPro cameras provides a novel and inexpensive means of observing fish behavior in the field that will allow us to better understand how fish utilize oyster cages for food, shelter, and habitat.”

“We know that shellfish farming provides a source of local seafood and economic benefits to coastal communities but it is important to remember the benefits it can provide to the ecosystem as well,” added Rose. The team’s research is shedding light on species diversity and habitat use around aquatic farms, and can also be used as scientific guidance to aid coastal area managers in permitting shellfish aquaculture. With an increased interest in making the United States more seafood-independent and decreasing the seafood trade deficit, understanding these interactions is vital to fostering sustainable aquaculture.

Last updated by Office of Aquaculture on August 11, 2021