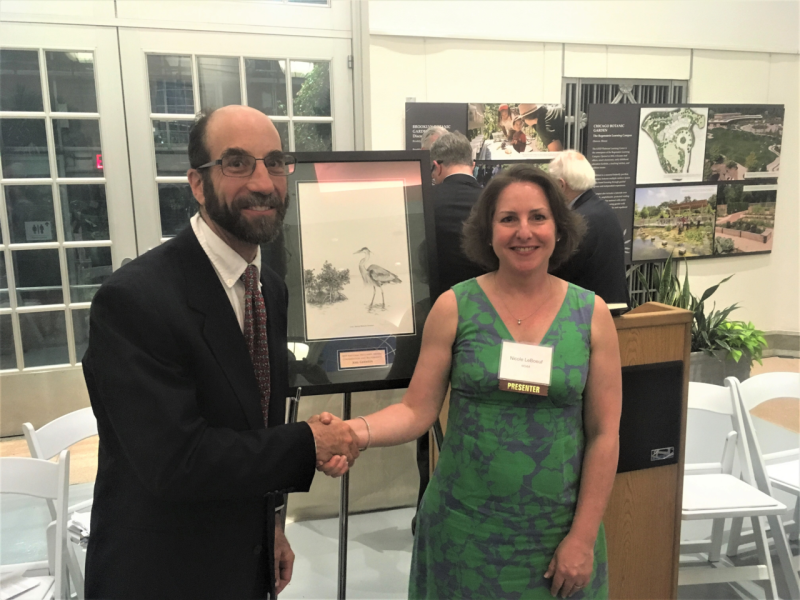 On May 7, 2019, Nicole LeBoeuf, Acting Assistant Administrator for NOAA’s National Ocean Service, honored Dr. Joel Gerwein of the California State Coastal Conservancy with a National Wetlands Award in the category of Conservation and Restoration. Joel received the award for his efforts over the past eleven years to protect and restore coastal ecosystems, specifically wetlands on the Northern California Coast, focusing on Humboldt Bay.

Joel has developed projects and leveraged partner funding for seven landscape-scale wetland restoration projects in an area where 90 percent of Humboldt Bay’s historic tidelands were lost to agricultural, residential, or industrial use. The projects resulted in the restoration of more than 1,000 acres of key habitat, rebounding populations of bird and endangered fish species, and threatened coho salmon recolonizing and thriving in newly restored habitats.

Joel also led the effort to secure $1.9 million for the Humboldt Bay Regional Invasive Spartina Project. Working with partners, the team advanced the science and best practices of Spartina eradication, which significantly reduced Spartina occurrences in the region.

“Joel’s years of dedication restoring wetlands for fish, wildlife, and public access to the rich diversity of ecosystems in Humboldt Bay are exemplary and provide a model for restoring wetland habitats across the nation,” said LeBoeuf at the award ceremony.

The 30th Annual National Wetlands Awards were held at the U.S. Botanic Garden in Washington, D.C., and awards were presented in six other categories. The awards, administered by the Environmental Law Institute (ELI), were established in 1989 and have honored over 200 wetland champions in honor of American Wetlands Month. NOAA became the first partner in 1999 to join ELI in honoring our nation’s wetland conservation heroes.

Last updated by Office of Habitat Conservation on May 15, 2019