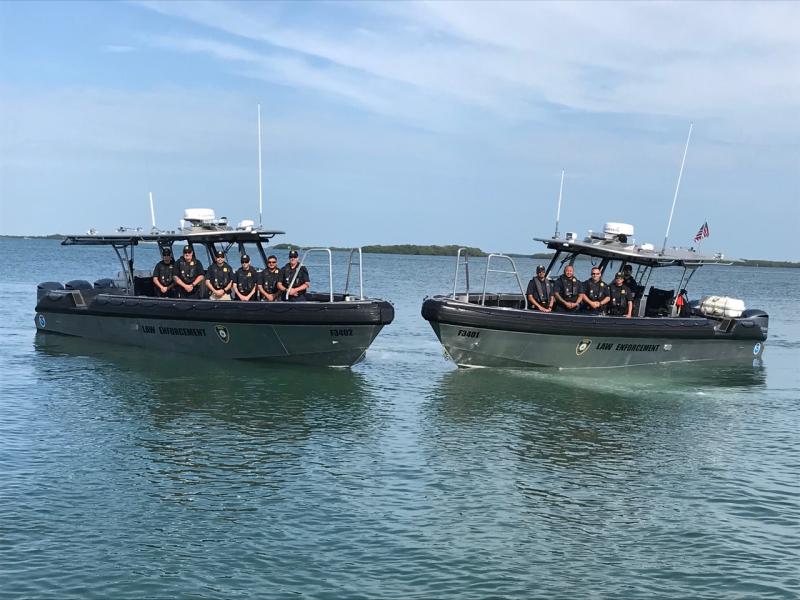 The NOAA Office of Law Enforcement is pleased to announce the appointments of Manny Antonaras, Martina Sagapolu, and Everett Baxter as their newest Assistant Directors. Antonaras was recently selected to lead the Southeast Division based in St. Petersburg, Florida and Sagapolu has been leading the Pacific Islands Division in Honolulu, Hawaii since last spring. Baxter took over the Investigative Operations Division in Silver Spring, Maryland last fall. As Assistant Directors in the regions, Antonaras and Sagapolu serve as OLE’s top regional leadership. At headquarters, Baxter leads OLE’s domestic and international investigative operations.

“NOAA’s Office of Law Enforcement is essential to the sustainable management of our nation’s federal fisheries and the conservation of our protected marine species and habitats,” said Jim Landon, Director of NOAA’s Office of Law Enforcement. “Together, Manny, Martina, and Everett bring a wealth of experience to their new roles with more than 65 years of federal law enforcement experience. I have every confidence that they will continue to support NOAA’s mandate to end overfishing and to protect marine resources through fair and effective enforcement of the laws and regulations under OLE’s jurisdiction.”

In his role as OLE’s Assistant Director in the Southeast, Antonaras oversees the largest of the continental divisions. The region has approximately 3,230 miles of coastline covering the South Atlantic, Gulf of Mexico, and the Caribbean. It is home to three national marine sanctuaries—the Florida Keys, Gray’s Reef, and Flower Garden Banks—and the international border between Mexico and the United States where the division is actively engaged in combating illegal, unreported, and unregulated fishing and seafood fraud.

Antonaras previously served as the Deputy Special Agent in Charge for OLE’s Southeast Division beginning in 2014. In this role, he oversaw the civil and criminal investigative work performed by special agents and enforcement officers. He also oversaw the division’s investigative support group, enforcement programs, and all patrol activities. During his tenure, Antonaras expanded the undercover operations program. He was instrumental in significantly increasing the uniformed enforcement officer program to enhance OLE’s visible presence and partnerships across the Southeast. He first joined OLE in 2002 as a student volunteer. He was hired as a special agent at the St. Petersburg, Florida field office after receiving his B.A. in Environmental Studies and Sociology from Eckerd College.

In her role as OLE’s Assistant Director in the Pacific Islands, Sagapolu oversees the largest geographical management area within both NOAA Fisheries and the regional fishery management council system. This includes the Papahānaumokuākea Marine National Monument, which OLE is charged with protecting and spans nearly 583,000 square miles. It also includes:

Beginning in 2015, Sagapolu served as the Deputy Special Agent in Charge for OLE’s Pacific Islands Division. Prior to this role, she served as Deputy Special Agent in Charge for the Southwest and West Coast Divisions, and as the acting Assistant Director for the Southwest Division from 2012 to 2014. In these capacities, she monitored investigations and provided guidance and oversight for complex civil and criminal cases. Sagapolu began her career in law enforcement as a special agent for the U.S. Immigration and Naturalization Service in Honolulu before joining OLE as a special agent. During her time as a special agent, she worked in Honolulu for 12 years and helped open OLE’s first ever field office in American Samoa. Sagapolu received her B.S. in Criminal Justice from Chaminade University of Honolulu. She is currently pursuing her M.S. in Law Enforcement and Public Safety Leadership from the University of San Diego.

In his role as OLE’s Assistant Director for the Investigative Operations Division, Baxter provides leadership and direction for programmatic and operational activities at OLE headquarters. He oversees domestic and international operations, including OLE’s Cooperative Enforcement Program with coastal state and territorial marine law enforcement agencies, and OLE’s work to combat illegal, unreported, and unregulated fishing and wildlife trafficking.

Baxter previously served as the Assistant Special Agent in Charge at the Federal Law Enforcement Training Center in Glynco, Georgia beginning in 2007. This role was moved to OLE headquarters in 2012 and Baxter assumed additional responsibilities over domestic operations and OLE’s Professional Responsibility Unit. He first joined OLE in 2001 as a special agent at the Charleston, South Carolina field office and later transitioned to headquarters as OLE’s Homeland Security Program Manager in 2004. Prior to joining OLE, Baxter spent more than 13 years on active duty with the U.S. Coast Guard. He served aboard patrol boats, as a special agent with the Coast Guard Investigative Service, and as an instructor at the Maritime Law Enforcement Academy. He continued with the USCG Reserve until his retirement in 2018 after 30 years of service , achieving the rank of Master Chief Investigator. Baxter received his B.A. in Criminology from Saint Leo University

Last updated by Office of Law Enforcement on March 25, 2021