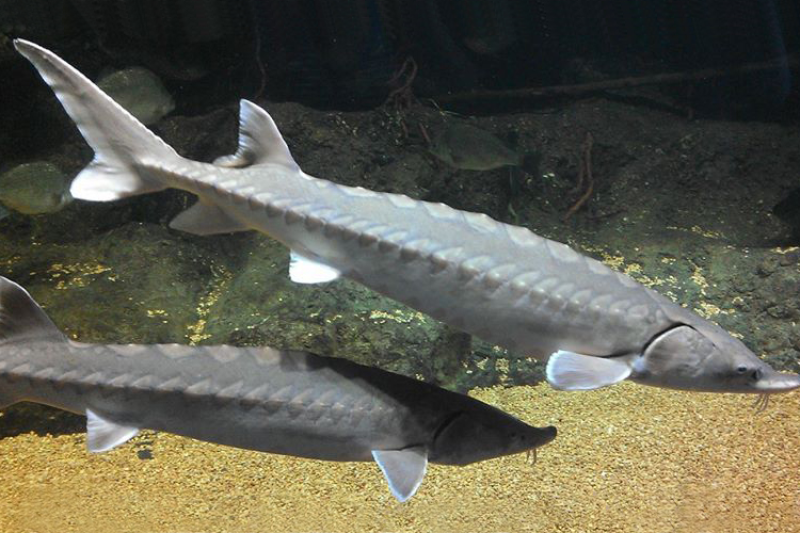 Atlantic sturgeon were once a highly valued fishery along the U.S. East Coast. Their populations declined dramatically in the late 1800s when they were overfished for their eggs for high-quality caviar. Atlantic sturgeon that are spawned in rivers that flow into the Chesapeake Bay are listed as endangered. These fish can be impressively large—up to 14 feet long and 800 pounds—but they are still vulnerable.

Habitat loss poses challenges for the recovery of the sturgeon population. Many places they need to live and reproduce are affected by degraded water quality or lack of the hard-bottom areas they need for spawning. Sturgeon can be injured or killed when hit by commercial and recreational boats. They also face accidental capture when people are fishing and in water intake structures.

Scientists from the NOAA Chesapeake Bay Office use sonar technology to map areas that could include sturgeon habitat. This helps them better understand the habitat features those places may offer. Sonar data can describe what the bottom is like in great detail—not just how deep it is, but whether it is sandy, muddy, rocky, or some other bottom type. After scientists gather the data, they create maps to identify areas that have hard, rough bottoms where sturgeon could spawn. 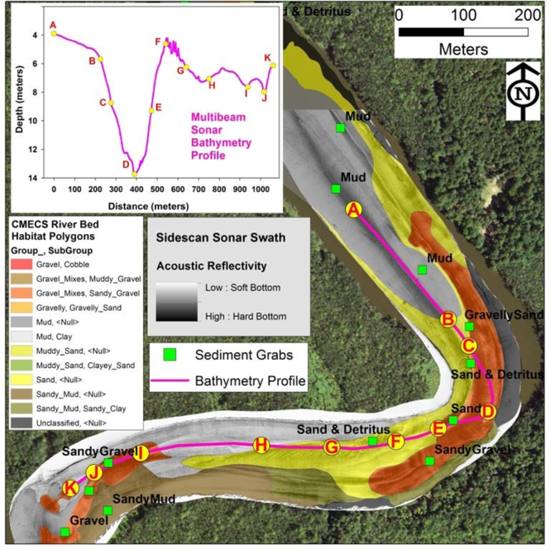 Analysis of sonar data can help scientists understand what river bottom habitats are found in rivers that are surveyed.

Delaware asked NOAA to do more sonar acquisition and analysis work in the upper Nanticoke River and its tributaries. We already have similar work under way in the Pamunkey, Appomatox, and parts of the James River in Virginia. NOAA conducted some of this work in the Nanticoke River and Marshyhope Creek at the request of Maryland and Delaware natural resource management agencies. NOAA found that rough, hard gravel or cobble bottom is primarily located in deep areas in the sharp bends of the rivers. This is where fast-moving current scours soft sediment out of underlying harder, rocky bottom. NOAA science helped us identify where essential features of critical habitat were located in Marshyhope Creek and the lower Nanticoke River.

Sonar survey data and analysis can also be used to help sturgeon by giving developers and regulators the information they need to make decisions. The Commonwealth of Virginia wants to move away from using groundwater as a municipal water source and toward pulling water from rivers for that use. But they want to be sure that the places where they pull that water—the water intakes—have minimal effect on the environment. There is concern that intakes may affect free-floating eggs and larvae of spawning sturgeon and river herring.

The Virginia Marine Resources Commission, Virginia Institute of Marine Science, NOAA Fisheries’ Greater Atlantic Regional Fisheries Office, Virginia Commonwealth University, and the developer of a project to install water intakes on the Appomattox River, and Virginia Commonwealth University are collaborating to assess fish population impacts from water withdrawals. They asked NOAA to survey and analyze the habitat in the area of the Appomattox River near one of the four proposed water intake locations. They wanted to see if any critical habitat for Atlantic sturgeon could be found. The team did find some areas of boulders, rough bottom, and some gravel areas, which regulators and developers will consider as they refine plans.

Much like commercial fish finders, side-scan sonar can “see” sturgeon. The NOAA team did some survey work for the Virginia Commonwealth University, in part of the James River during sturgeon spawning time in 2017. VCU had seen a lot of sturgeon in that area and wanted to compare their fish sampling information with habitat data. NOAA’s sonar images showed many features that looked like fish about as big as an adult sturgeon.

In 2018, the NOAA team was able to use a dead sturgeon to validate what a sturgeon would look like on sonar. They used several different sonar frequencies with the sturgeon and several depths in the water. Images of the dead sturgeon were remarkably similar to the fish-like features observed in the James River survey. The team also learned that it was easier to “see” a sturgeon with higher-frequency sonar, and when the fish were oriented parallel to the survey route. Of course, scientists can’t simply ask fish to face a certain way to be counted. So at this point this data may help with population estimates, but does not provide absolutely accurate counts.

NOAA science provides needed information to help people make decisions that will help the population of Atlantic sturgeon grow. Sonar—and the scientists who acquire and analyze sonar data and images—plays a big role.