On February 13, 2021, we received a report of a dead North Atlantic right whale off the coast of Florida. We will update this web page as more information becomes available. 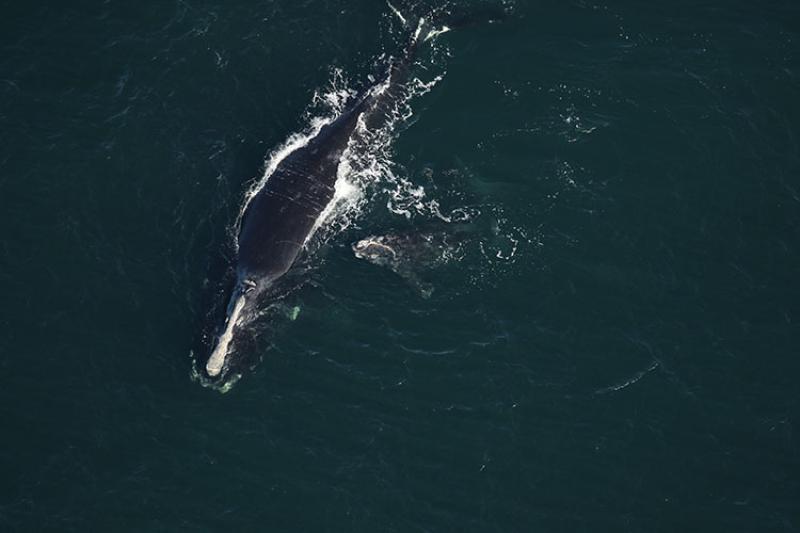 On February 16, 2021, the calf’s mother “Infinity” (#3230) was found by a right whale aerial survey team alive but with new injuries. The Georgia Department of Natural Resources and Clearwater Marine Aquarium documented “Infinity” about 50 nautical miles north of St. Augustine Inlet, Florida, off the coast of Georgia. “Infinity” has two new cuts on her left side suggestive of a vessel strike.

A dead North Atlantic right whale calf was reported stranded on February 13, 2021, along the Florida coast. The animal is likely the calf of a 19-year old female named Infinity (#3230). The calf was first sighted on January 17, 2021, off Amelia Island, Florida. This is the first observed right whale death in U.S. waters in 2021. Regrettably, it is the second dead right whale calf of the 2020–2021calving season following the discovery of a dead calf in North Carolina in November 2020. NOAA’s Office of Law Enforcement is investigating the incident.

In collaboration with our partners, we are organizing a necropsy (animal autopsy) of the calf to conduct a detailed evaluation of the cause of death, evaluate the calf’s overall health prior to death, and generally learn more about this animal. We are working with our Marine Mammal Stranding Network partners, including:

An Unusual Mortality Event (UME) has been ongoing for North Atlantic right whales since 2017. Since the UME was established, 33 whales (including this one) have been found dead in U.S. and Canadian waters. An additional 14 live seriously injured whales have been documented, bringing the current total number of animals in the UME to 47. The primary causes of the Unusual Mortality Event are entanglements or vessel strikes. North Atlantic right whales are a critically endangered species with fewer than 400 individuals estimated remaining. The 47 whales documented so far in the UME represent more than 10 percent of the population. This is a significant setback to the species’ recovery.

The protection of these animals is in the hands of all mariners on the water. Slow down and remain alert while traveling through areas where right whales are found. It is difficult to see right whales, especially in poor light or weather conditions, so slowing down is the best prevention to avoid collisions. Allow plenty of time to slowly return to port—don’t wait until you’re racing to return before the sun goes down.

NOAA urges vessels of all sizes to please slow down and give these animals space. Mom-calf pairs spend the majority of their time at, or a few feet below, the water's surface in the Southeast United States. They can be surprisingly difficult to see, especially in poor light or weather conditions. The calving season is a critical and vulnerable time for right whale mothers as they nurse their young calves. Federal law requires everyone to stay at least 500 yards away from right whales by sea and by air (including drones).

With fewer than 400 individuals remaining, North Atlantic right whales are one of the world’s most endangered large whale species. NOAA Fisheries has developed regulations to help protect these whales from vessel collisions and entanglements.

Learn more about the North Atlantic right whale, a NOAA Fisheries Species in the Spotlight