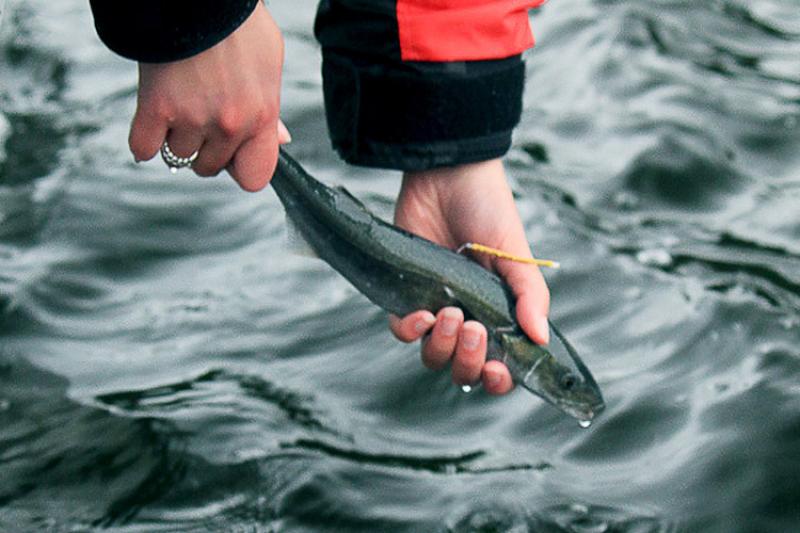 Sablefish, butterfish, black cod – by any name, people call this fish delicious. Its delicate texture, buttery flavor and rich omega-3 content add up to a high-value fishery: while sablefish make up a small portion of commercial catch by volume, their high price generates a lot of income for Alaska’s seafood industry—a big economic bang per fish.

To keep a fishery productive over time, managers need to know how fish populations respond to environmental changes and human activity. Understanding how these factors influence survival of vulnerable juvenile fish is crucial to predicting and ensuring recruitment (the number of fish that grow to a size commercially profitable to catch) to the fishery.

Despite their value in the seafood industry, there is a lot we don’t know about sablefish.

“Sablefish are kind of mysterious,” says Karson Coutré, a NOAA Fisheries affiliate with Earth Resources Technology, Inc. at the Alaska Fisheries Science Center. “Adults live far offshore in deep water, and their range is vast. They spawn in winter when rough seas and weather make research difficult. Young sablefish live close to shore, but they can be difficult to find – they show up at unpredictable times and places.”

Coutré is lead author of a new joint NOAA Fisheries and University of Alaska Fairbanks study that documents for the first time fine-scale vertical movements of juvenile sablefish in the wild. The study begins to fill a gap in our knowledge of the behavioral patterns that influence juvenile sablefish survival in nearshore habitats.

In Search of Sablefish

First, they had to find them. By studying previous NOAA research, Coutré’s team learned that there is one place you can count on seeing young sablefish in most years: St. John Baptist Bay, in Southeast Alaska. This revelation spurred a lot of questions,” says Coutré. “Why are they always there? The Bay is an unlikely haven from predation because halibut and Pacific cod big enough to eat young sablefish are caught there. Are young sablefish there for the food, and using schooling and active behavior to avoid predators?

Juvenile sablefish are vulnerable to a wide range of predators: seabirds, salmon and other big fish. They in turn eat both pelagic prey that swim in the water column, like small fish and krill, and bottom-dwellers such as worms and clams.

By moving up and down in the water column, fish can manage trade-offs among food availability, predation risk, and temperature (which affects how much energy they spend) to benefit their growth and survival. For example, juvenile sockeye salmon swim toward the surface at dusk to feed, then return to deeper waters to avoid visual predators during daylight.

To track vertical movement patterns of sablefish in the wild, NOAA scientists caught 13 wild juveniles in the bay using hook and line, tagged each with acoustic transmitters, then released them near the capture location. Six of the fish remained within detection range (about 200 meters) of two acoustic monitors and were observed for the duration of the study, from October 2 to November 18, 2003. The tags transmitted depth, date and time to the nearest 5 seconds for each fish.

These fish spent most of their time near bottom (deeper than 30 meters) throughout the study. But all six fish made excursions to shallower depths.

“We were surprised at how rapid the excursions were,” Coutré says. “They may have been hunting forays into herring schools. The young sablefish were very active. It was a clue into their hunting behavior and exciting to be recording that in the wild.”

The young sablefish ventured into the water column most frequently at certain times of day—but not necessarily when expected. They made more excursions at dawn, but also during daylight hours. “The pattern doesn’t suggest that sablefish use low light to avoid predators. Since they are visual predators themselves, they may spend less time hunting in the water column when light is low. They might find refuge in seafloor habitat, leaving the safety of the bottom for quick hunting excursions during the day.”

The number of trips also depended on the date, peaking between October 30 and November 9. “We don’t know why for sure, but this period coincided with the new moon and spring tide, when the difference between high and low water is greatest. It may be that the greater tidal exchange during that time brought food into the bay. Or it could be a seasonal effect—we know that some krill come inshore in the fall,” Coutré speculated. Average number of excursions by six juvenile sablefish from October 6 to November 14, 2003.

Movements of some sablefish were strongly linked to daily high and low tides, while other individuals showed no response. “This suggests that individual fish have different foraging strategies, with some taking advantage of feeding opportunities during flood and slack tides while others remain at the bottom. Foraging specialization could be related to social structure,” says Coutré. “To pin it down, we would need diet studies coupled with tagging, a bigger sample size and longer study duration.”

Knowing where young sablefish are at different times and when they are actively feeding will help scientists figure out how environmental changes and human activity influence their survival.

“Sablefish recruitment has been low for nearly two decades—we have seen only one year above average since 2000. But now we are seeing more juveniles,” says Coutré. “We want to understand why we are seeing them now, how changes in their environment affect them, and how we can mitigate those effects to help ensure that these young fish survive to recruit to a valuable fishery.”