Ocean Acidification: Monitoring and Measuring the Physiological and Population Response of Living Marine Resources in Alaska

In the United States and other coastal nations, ocean acidification has quickly become a common topic of scientific research. Ocean acidification also has become a public concern as news headlines warn of this potentially threatening byproduct of global climate change. Global climate change studies have revealed that the rate of increase in atmospheric carbon dioxide (CO2) concentration has increased substantially since the industrial revolution (mid-1700s). The world's oceans have absorbed between 30% and 50% of that new CO2. 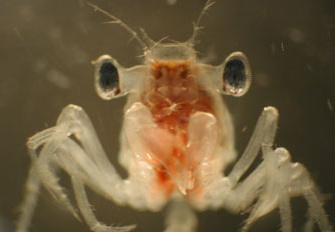 The increase in oceanic CO2, when incorporated into the carbonate system, has resulted in an average decrease of surface ocean pH by 0.1 units, the equivalent of a 30% increase in acidity. The increased acidity reduces the saturation of calcium carbonate, making it more difficult for some calcifying organisms to sequester calcium and carbonate to build shells. In the North Pacific Ocean, the saturation depth of calcium carbonate is already shallow (<200 m) relative to the North Atlantic (~2,000 m). Therefore, the marine organisms in Alaska are particularly at risk to effects associated with ocean acidification. In addition, some species such as golden king crab (Lithodes aequispinus) in Alaska already inhabit undersaturated environments; understanding how they cope with this environment will help us evaluate the effects of ocean acidification on Alaska species.

Scientists at the Alaska Fisheries Science Center (AFSC) have worked locally, nationally, and internationally since 2007 to address the potential impacts of ocean acidification on scales from individual organisms to ecosystems. This research currently receives funding support from NOAA's Ocean Acidification Program and the North Pacific Research Board. In 2008, AFSC scientists developed a research plan to test the hypotheses that reduced ocean pH and the resultant reduction in availability of calcium carbonate would have wide-ranging effects, including reduced growth, survival, and reproduction of commercially important fish and shellfish, ecologically important prey of those species, and cold water corals. Species-specific physiological responses to ocean acidification were not well understood, so a broad research effort was considered for several taxa including shellfish, calcareous plankton, cold water corals, and fish. Prioritization was given to the larval and juvenile stages of commercially and ecologically important taxa more likely to be directly affected by ocean acidification in Alaska.