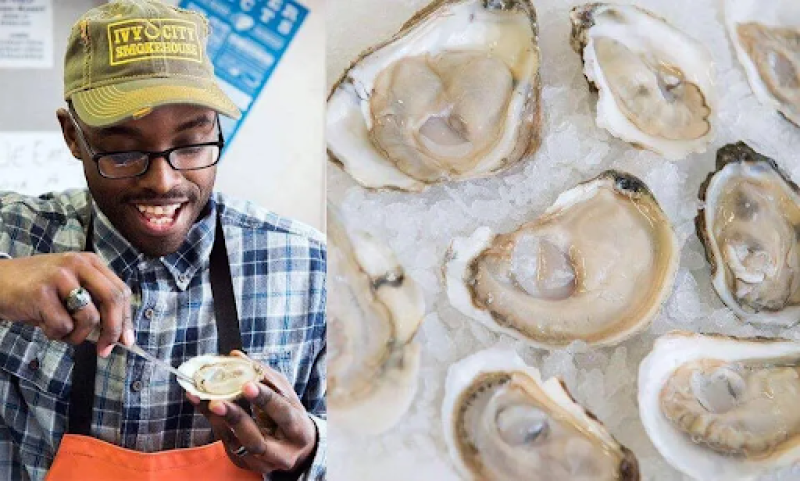 Nationally ranked oyster shucker Gardner Douglas is known within the shellfish community as the Oyster Ninja for his skills with the shucking knife. A popular fixture in the Mid-Atlantic oyster scene, Douglas has worked in oyster shucking houses, raw bars, and has even shucked for presidents. As he became more involved in the industry he also looked for ways to give back and share his love for seafood with others. Under the name Oyster Ninja, Douglas hosts a popular podcast that brings shellfish recipes, research and conservation work, and guest speakers to his listeners.

Douglas is an Army National Guard veteran who served in Afghanistan and assisted with domestic natural disaster response for events like Hurricane Sandy. After returning home from deployment and leaving the National Guard Douglas wanted a low-stress career. “I wanted to work in a hands-on environment, something that was low pressure and where I was not responsible for anyone else,” said Douglas. He remembered his upbringing on the Eastern Shore of Virginia and the fun times he had fishing, crabbing, and playing in the water. “Seafood was something that was always in my family. I remember seeing my grandmother’s oyster shucking knife around the house,” added Douglas. Like many families in the area, his grandmother, father, aunts, and uncles worked in all aspects of seafood—from shucking houses to seafood restaurants. In his early twenties, Douglas had worked in a shucking house and worked in the trade before enlisting in the National Guard.

Upon reentering civilian life, Douglas began working at D.C. raw bars such as Rappahannock Oyster Bar. It was here that Douglas learned about podcasts from a fellow shucker. “I started looking into the oyster podcasts out there, but most were heavy into research and policy,” he said. “Of course those topics are important, but I wanted to hear more introductory information and recipes, material for the common person.” Seeing the gap in the available podcasts, he started tinkering with his own. Looking back, Douglas laughs about the early days of his social platforms. He admits that he was not sure what it would take to make a successful podcast or YouTube channel, but he was willing to throw his hat in the ring and improve as he went along.

Now in its fourth season, the Oyster Ninja podcast provides a space for those not traditionally featured in seafood news. Douglas’ guests range from conservation and stewardship groups like the Anacostia Watershed Society, family-owned oyster farms, and popular chefs, He also speaks with organizations working to increase diversity and accessibility of oysters in their communities. “Hosting a show, it can be difficult to get guests, but I like a mix of well-known and lesser known community members on the show,” added Douglas. This allows him to share his platform and access to his audience. “We introduce some of the world’s top shuckers, oyster farmers, and anyone else that has something to do with this oyster world.”

When COVID hit the oyster industry, Douglas shifted his online content to connect consumers to online oyster delivery resources. He also uploaded videos on how to shuck oysters at home, oyster knife reviews, and even a battle of oyster hot sauces. With the closure of many D.C. restaurants and special-event raw bars, Douglas began his own mobile raw bar business. “I deliver oysters to customer’s doors and can even shuck for them. It helps keep the oyster business going and it helps with access to delicious oysters.”

Learn to Shuck with the Oyster Ninja on YouTube

Douglas, like many others in the seafood business, is looking forward to welcoming folks back to events and raw bars. He also looks forward to using his podcast and other outlets to provide access to shellfish information and the oyster community. Whether listeners are interested in champion shuckers, enjoying new recipes, or meeting the farmers behind the oyster, Douglas welcomes them to the podcast. “It takes a variety of folks and specialties to get oysters on the plate,” he added when explaining his guest speaker’s backgrounds. Researchers, policy makers, farmers, markets, and shuckers all have a hand in getting the oyster to consumers. If they have a story to share, Douglas wants to help them tell it.