The Coral Restoration Foundation is a collaboration machine—focusing on active reef restoration, scientific research, and education. 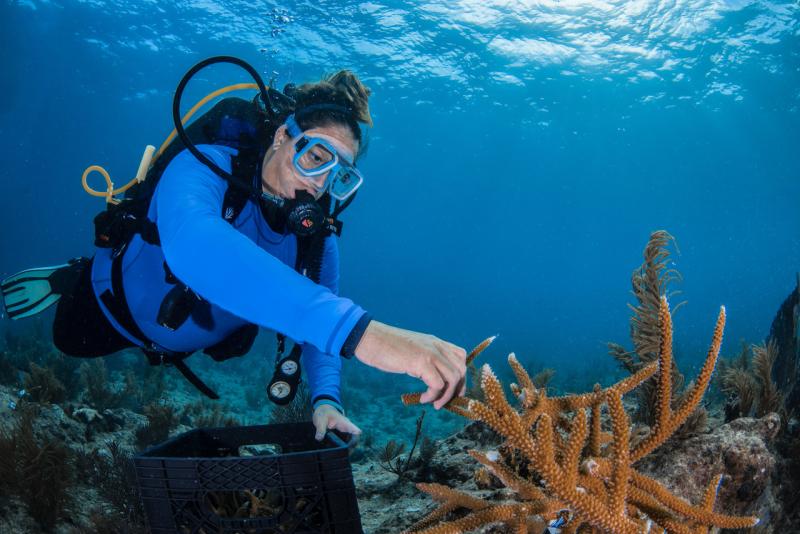 As part of our Habitat Month focus on partnerships, we interviewed Jessica Levy from the Coral Restoration Foundation, an organization that partners with NOAA to rehabilitate and restore coral reef habitat in the Florida Keys.

Jessica Levy, the Restoration Program Manager at the Coral Restoration Foundation (CRF), manages efforts to grow coral colonies in offshore nurseries, and then “plant” them onto the reef with the assistance of many dedicated colleagues and volunteers. She has worked with CRF for six years, starting as a volunteer in her early days, and has seen the organization grow from a small non-profit to a global force in coral restoration.

What is CRF’s mission, and what does that mission mean to you?

Our mission has three important legs: restoration, education, and science. My original draw to CRF was that it had a very active approach—we were not just talking about coral, but actively restoring reefs. We also spend a lot of time educating the public about the importance of ocean conservation and using science to further coral restoration techniques. The three parts of the mission are separate, but very complementary. 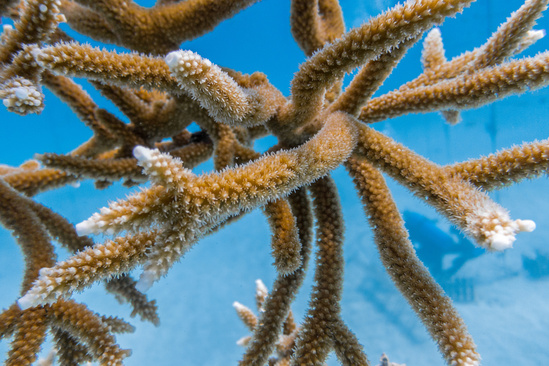 How do you protect coral reef habitat?

We do active restoration work with stony corals, staghorn and elkhorn, which are listed as endangered species. These keystone species form a solid reef structure and provide food, protection, and habitat for small invertebrates, fish, and other animals. These corals have seen a lot of decline in Florida and the Caribbean.

The work starts in a nursery setting. We cut pieces of a coral colony to make clones and grow them in “Coral Tree™” structures 30 feet deep, three miles off the Florida coast. With this proven technique, we build up the coral stalks until they’re “reef-ready” (about the size of a cantaloupe), and then place or “outplant” them on an existing natural reef to grow. Our technique promotes faster growth and recovery than growing coral directly on the reefs, and allows snorkelers and divers to get hands-on field experience. We put a lot of science and continued monitoring behind our coral restoration to make sure it’s successful.

NOAA has been a partner of CRF for around 10 years—how has CRF’s partnership with NOAA evolved over time?

Our partnership has evolved pretty immensely. In 2009, CRF was working on small coral restoration projects with NOAA. By 2013, NOAA awarded us our first major three-year restoration grant, our most significant support yet. It was an important turning point: having the support and backing of NOAA made us a bigger player in the field of coral restoration.

Our internal protocols started to evolve and become more efficient, too, so we could maximize our accomplishments during the three-year award period. We became more strategic in our approach to coral restoration by writing out process maps, developing strategic plans, and implementing other procedural standards as a result of our NOAA funding.

Now, our partnership is extremely collaborative. Our funding from the NOAA Restoration Center goes way beyond financials; they provide technical assistance, guidance,  instruction on stabilizing loose coral after major storm events, and organizational development, so that our restoration projects and collaborative efforts are as effective as they can be.

A collaborative partnership, like ours with NOAA, helps us avoid repeating past mistakes. 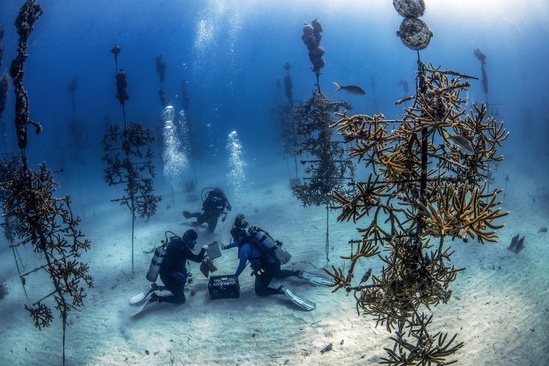 How does CRF collaborate work with other groups as part of the Coral Restoration Consortium?

The Coral Restoration Consortium came out of a 2016 NOAA conference, where participants decided coral partners needed a forum to talk more regularly,  share stories and give project updates more than once every few years. It is made up of managers, practitioners, researchers, and other user groups in the coral restoration field. We wanted a way to pull together all the players in coral restoration, so they were not doing things in a vacuum. The Consortium encourages sharing lessons learned in this evolving field in real time.

Since its creation, there has been a lot of collaboration and information sharing across six working groups focused on coral propagation (larval, land-based, and field-based), genetics, demonstration projects, and monitoring. CRF CEO, Scott Winters, co-chairs the Consortium with NOAA’s Tom Moore. Staff also operate as co-chairs on working groups and members, working with others to write standards and implement coral “best practices” to move the development of coral restoration science forward. The goal of the Consortium is to scale up coral restoration from the individual colony to the reef, recognizing that our efforts have to increase dramatically in order to restore at an ecologically significant scale.

Right now, the Consortium is planning for the first global coral restoration conference: “Reef Futures 2018,” which will be December 2018 in Key Largo, Florida. We are hoping for 300-500 participants from around the world to join us.

What is CRF’s “Habitat Hero” superpower? Is there a significant accomplishment you are proud?

Our main superpower is our size and strength as an organization. We are the largest program specifically dedicated to corals and restoration, and we are able to do that very well and at a large scale. It is a huge accomplishment to have come from very humble beginnings to where we are today; to be able to watch CRF grow over six years has been really rewarding for me. 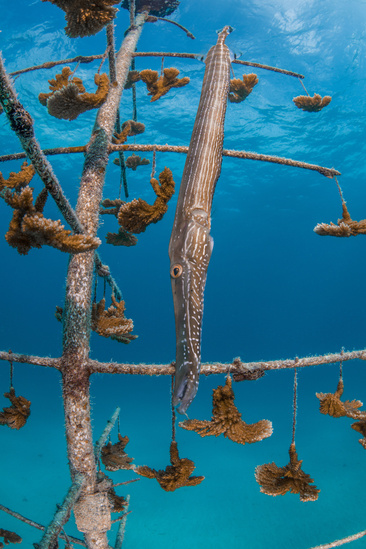 What are the next steps for CRF?

We are looking to do things at a greater scale: focusing on developing our international presence, and working with smaller groups to start more restoration programs. Although it is a daunting task, we recognize that we and the coral restoration community need to push further to make a real difference.

At the internal level, this year we are hoping to outplant boulder coral, an especially resilient species which can grow to the size of a Volkswagen! Coral reefs with more species and physical diversity provide a greater diversity of habitat attracting more biodiversity to the reef.

Tell us your favorite moment or fun fact about CRF’s partnerships.

We have had a lot of community groups show their support for our restoration. We have a beer named after us—a Hibiscus sour ale called “Fire Coral Ale”—from the Florida Keys Brewing Company. In collaboration with PADI, we developed a Coral Restoration Diver Distinctive Specialty with three levels, including one for restoration team leads. We are working with the Girl Scouts to design standards for a coral restoration badge. CRF is a collaboration machine, we welcome all kinds of partnerships and look forward to our next opportunity to raise awareness about coral reef restoration.

The Coral Restoration Foundation is always looking for participants to get involved with their coral projects and education efforts. Learn more about NOAA’s work with shallow coral reef habitats.

Habitat Heroes, Some of Our Partners in Habitat Conservation

Everything we do related to habitat conservation requires strong partnerships, and they are incredibly important to us. 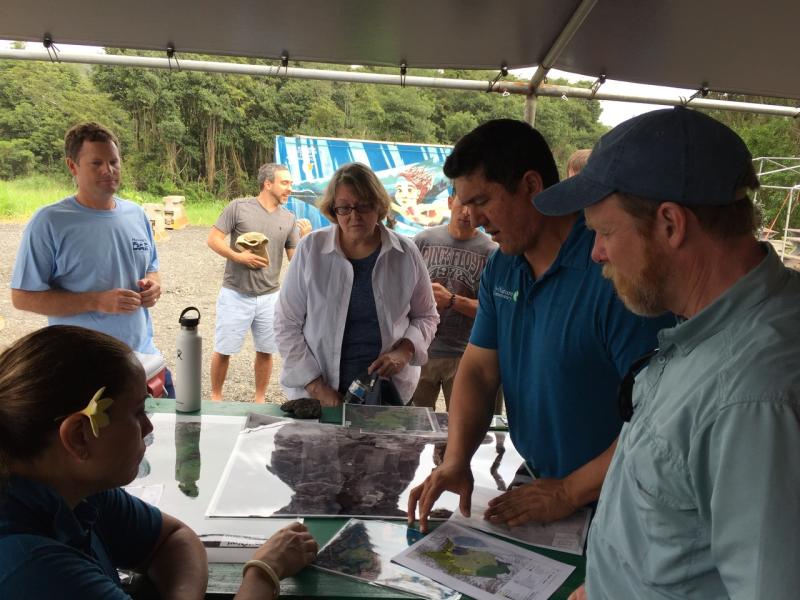 Last updated by Office of Habitat Conservation on November 29, 2021