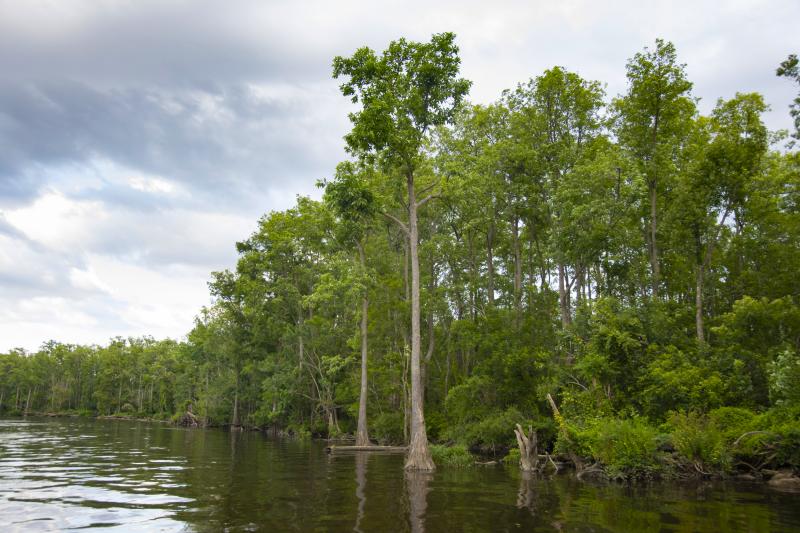 Tidal forested wetlands are included in some of the land acquired in the Cape Fear River basin. Credit: North Carolina Coastal Land Trust

NOAA recently collaborated with local community and nonprofit partners to purchase 1,700 acres of wetland and floodplain habitat. The acquisitions, coupled with long-term protection agreements, protect the areas from the high risk of development to compensate for habitats lost from pollution. These three restoration and conservation projects are being implemented using $1.7 million in settlement funds from the Kerr-McGee Chemical Corporation Natural Resource Damage Assessment case.

The company had a wood treatment facility  that released hazardous waste into habitats along the iconic Cape Fear River and two other tributaries in North Carolina. The site is now a Superfund site. NOAA and its partners settled with Kerr-McGee for the damages and are now using the funds to restore and preserve habitats within the Lower Cape Fear River watershed.

These land conservation efforts also improve community and environmental resilience. The Cape Fear River Basin is among the fastest-growing regions of the South Atlantic coast and these properties were at high risk for development. Acquiring them helps avoid future flooding while preserving critical buffer and refuge habitats. The acquisitions, finalized in summer of 2021, preserved three tracts of pristine habitat in the basin from increasing development pressure.

These wetland habitats also contribute to climate resilience. They act as blue carbon sinks, sequestering and storing carbon in the plants and soil. Additionally, the vast extent and diverse elevations of these properties will allow room for the expected movement of tidal wetlands due to sea level rise. The newly preserved wetlands and floodplains are expected to buffer the impacts of flooding on the growing Cape Fear communities for years to come.

These projects demonstrate the value of habitat conservation as an effective and efficient technique to avoid development pressures and increase resilience in the Cape Fear Basin. Seven other projects are included in this $12.3 million first phase of restoration for the Kerr-McGee case. Those include:

NOAA works with federal, state, and tribal authorities to assess and restore coastal and marine natural resources affected by pollution through the Natural Resource Damage Assessment process. Habitat conservation and protection is a valuable way to compensate the public for injured natural resources in the Cape Fear River Basin.

Last updated by Office of Habitat Conservation on July 12, 2021