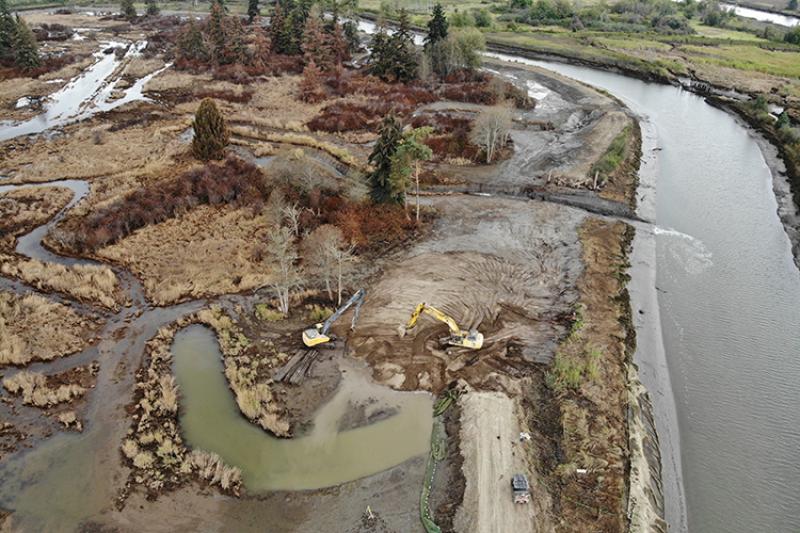 In addition to supporting fisheries and protected resources, habitat restoration builds resilience in communities and ecosystems. Hurricanes, floods, and other natural disasters can have devastating effects on coastal communities. Restoring healthy habitats can help protect these communities from damage caused by extreme weather and a changing climate.

Almost half of the U.S. population lives near a coast. Communities, businesses, and infrastructure in these areas are under increasing pressure from the impacts of flooding, climate change, and sea level rise. If current trends continue, up to $106 billion worth of coastal property is predicted to be below sea level by 2050.

Habitat restoration provides a safe, effective, and affordable approach to coastal protection. Efforts like restoring coastal wetlands and removing outdated dams can improve coastal resilience—helping communities recover from and adapt to the impacts of extreme weather and climate change.

Wetlands act as natural sponges, absorbing and temporarily storing floodwaters. By holding back some of the floodwaters and slowing the rate that water enters a river or stream, wetlands can reduce the severity of downstream flooding and erosion. This helps protect people, property, infrastructure, and agriculture from devastating flood damages. During Hurricane Sandy, for example, wetlands protected areas of the East Coast from more than $625 million in direct flood damages.

In some coastal areas, however, the construction of dikes, tide gates, and ditches have disconnected rivers from their historic floodplains. This limits the amount of floodwaters that wetlands are able to soak up, putting nearby communities at risk of frequent flooding. In addition, important species like salmon are blocked from accessing their habitat, leading to population declines.

The NOAA Restoration Center works to remove old dikes, tide gates, and other structures and reconnect wetland and estuary habitats. Across the country, we’ve supported more than 200 projects that have removed or modified dikes, berms, and tide gates to restore flows to wetlands and floodplains.

In Washington’s Snohomish Estuary, for example, our Smith Island project restored more than 300 acres of tidal wetlands that had been diked since the 1930s. After breaching this dike, the restored area can now store more than 1,400 acre-feet (482 million gallons) of water, helping to provide flood protection for the nearby City of Everett. The restored wetlands can also support an average of 250,000 juvenile salmon per year, providing habitat they can use to feed and grow before migrating to the ocean.

Along the coast, habitats like barrier islands and marshes help buffer the mainland from erosion and damage due to storms and flooding. But these habitats—and the protection they provide—are disappearing at an alarming rate. Some of the most dramatic loss is occurring in Louisiana, where coastal wetlands are lost at an average rate of one football field every hour.

NOAA helps to restore wetlands and barrier islands along the Louisiana coast through the Coastal Wetlands Planning, Protection, and Restoration Act Program. These large-scale restoration projects slow the high rate of land loss in Louisiana, while providing habitat for valuable Gulf of Mexico fisheries. By partnering on nearly 40 restoration projects through this program, we’ve restored more than 11,000 acres of vulnerable Louisiana coastline since 1990.

In the Rockefeller Wildlife Refuge, for example, we worked through CWPPRA to construct a new breakwater along four miles of shoreline. The refuge is described as one of the most biologically diverse wildlife areas in the country. But it also has one of the most rapidly eroding shorelines in Louisiana, averaging a loss of more than 50 feet each year. The new breakwater is helping reduce erosion along the Gulf of Mexico shoreline and protecting more than 250 acres of valuable marsh habitat.

Outside of Louisiana, the NOAA Restoration Center has supported more than 330 projects across the country that use erosion-control techniques to protect coastal areas. This includes more than 140 living shorelines, which help stabilize shorelines and slow erosion while also creating habitat for wildlife.

In the United States, more than 2 million dams and even more culverts and other barriers block fish from migrating upstream. When fish can’t reach their habitats, they can’t reproduce and maintain or grow their populations. In addition, many of these structures have fallen into disrepair and are no longer capable of handling the intense rainfall and floods of a changing climate.

The NOAA Restoration Center works to improve fish passage by reopening rivers and streams that are blocked by dams, culverts, and other barriers. We’ve supported more than 210 dam removal projects and nearly 400 projects to remove or modify culverts. In addition to supporting migratory fish populations, this work helps reduce flooding impacts to communities and eliminate the risk of dam failure.

In Taunton, Massachusetts, for example, we supported the removal of three aging dams on the Mill River. In the fall of 2005, historic heavy rains threatened the stability of the Whittenton Pond Dam. Nearly 2,000 city residents had to evacuate from the area immediately downstream due to the imminent risk of dam failure and a catastrophic flood.

Although the dam ultimately held, the near-catastrophe spurred action by NOAA and partners to remove the Whittenton Pond, Hopewell Mill, and West Britannia dams. With the three aging structures removed, nearby communities have a decreased risk of flooding and are more resilient to potential impacts of extreme weather and climate change. The work also opened more than 30 miles of the Mill River and its tributaries to river herring and other migratory fish.

Last updated by Office of Habitat Conservation on July 12, 2021