Probiotics on the Shellfish Farm

Mike Congrove is a hatchery manager at the Oyster Seed Holding Company in Matthews, Virginia, near the mouth of the Chesapeake Bay. His company produces oyster seed, which it sells to East Coast oyster farmers. Oyster seed are 2-week-old oysters—tiny, almost microscopic versions of the oysters you see on ice. To make sure his oyster seed is healthy, Congrove feeds them a healthy diet, and he hopes their diet will soon include something new: probiotics.

Probiotics are microorganisms that improve health, such as the bacteria in some yogurts that aid human digestion. The probiotics Congrove is waiting for were recently developed by scientists at the NOAA Fisheries Aquaculture & Enhancement Division Lab in Milford, Connecticut.

Although probiotics are already used at salmon and shrimp farms, this is the first time they have been developed for bivalve shellfish. 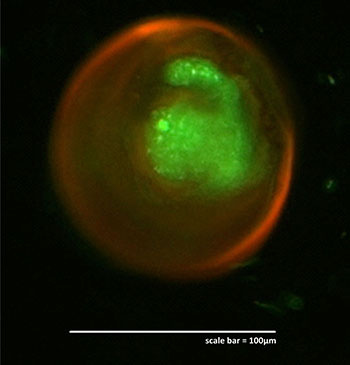 At the oyster hatchery, Congrove grows oyster larvae from fertilization to 2 weeks, at which time the free-swimming larvae metamorphose into the tiny versions of adult oysters he sells as seed. Even under the best conditions, most of the larvae don't survive the transition. During the cooler months, Congrove's yield is around 40 percent, but in summer, when bacteria that can harm the delicate larvae proliferate in the warmer water, his yield is half that.

"We're always trying to increase our percentages, and probiotics have a lot of potential," Congrove said. “Plus it's environmentally friendly."

In some parts of the world, antibiotics are used to control bacterial disease when producing seed at shellfish hatcheries. But antibiotics, which can give rise to resistant strains of pathogens, are not approved for use in growing oysters or other bivalves in the United States.

Because there was no established protocol for identifying and screening probiotic candidates for bivalve shellfish, Kapareiko and her colleagues adapted a method they found in an agriculture journal covering dairy cows. Said Gary Wikfors, another NOAA Fisheries scientist involved in the project, "considering that animal agriculture is 10,000 years ahead of aquaculture, it's a good place to look for ideas."

This research will contribute much more than simply a probiotic strain for Eastern oyster larvae. "We're providing a template that someone else can follow for any species of shellfish, anywhere in the world," Wikfors said.

To find probiotic strains, NOAA Fisheries scientists collected bacteria that occur naturally in the digestive glands of healthy adult Eastern oysters. They then grew those candidate strains in petri dishes along with a pathogenic strain of Vibrio bacteria that had caused a disease outbreak a few years before. The strains that were most effective at inhibiting growth of the pathogen in a petri dish then advanced to the next stage of testing: the guts of live oyster larvae.

The 15th strain they tested, dubbed OY15 by scientists, was the most effective. "We see higher survival of larvae that have been given OY15," said Diane Kapareiko, the NOAA Fisheries scientist who led the effort. "Better survival means more seed to sell."

Many probiotics are thought to work by competitive exclusion of potential pathogens. For instance, if your gut has plenty of beneficial bacteria that aid in digestion, then detrimental bacteria are less likely to gain a foothold. Scientists initially expected they would see the same mechanism at work with oyster probiotics. 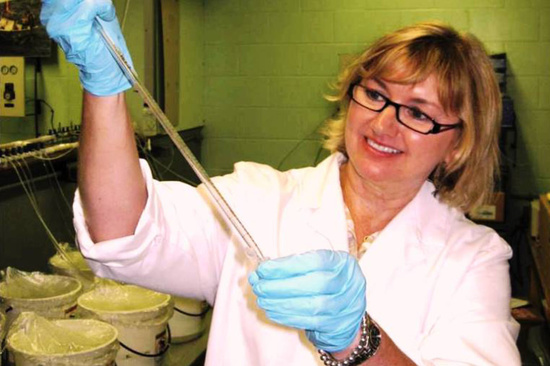 What they found instead was that OY15 worked by stimulating the immune system. OY15 is a Vibrio species and, although hearing that name can give even the toughest oyster farmer the shivers, there are many types of Vibrio, not all of them pathogenic. In this case, analysis of the OY15 genome revealed that it lacks the genes that cause pathogenicity.

"We think it's probably a harmless former pathogen that nevertheless is recognized by the shellfish immune system as a potential threat, and that up-regulates the immune system," Wikfors said.

Field Trials to Begin This Summer

get the immune system benefit, Congrove will simply add some freeze-dried OY15 to his tanks every other day during the 14-day period of larval development—if the probiotics work in the real world as well as they do in the lab, that is.

This summer, researchers from the University of Rhode Island will conduct field trials of OY15—as well as two other strains they have been developing independently—at commercial and university hatcheries. If all goes well during field trials, oyster probiotics could hit the market in 2 to 3 years.