A progress update on habitat restoration projects in Alaska, Washington, California, and Virginia. 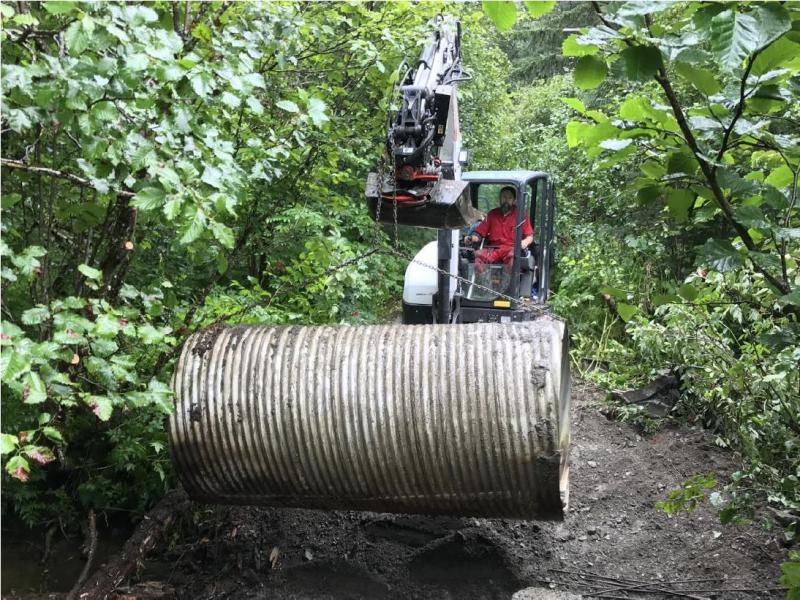 NOAA funded four projects to engage recreational anglers in habitat conservation in Washington, Virginia, California, and Alaska in 2020. The projects were funded through the National Fish Habitat Partnership. They demonstrated NOAA’s commitment to collaborate with the recreational fishing community. Despite a challenging year, these projects made great progress to benefit coastal communities, fish, and habitats.

The Takshanuk Watershed Council removed a culvert that was blocking fish passage in Mink Creek in Southeast Alaska in August of 2020. The stream is home to coho and chum salmon, as well as Dolly Varden and cutthroat trout. It is listed in the Alaska Anadromous Waters Catalog, which provides habitat protection under state law. This spring, the Takshanuk Watershed Council began the next phase of the project. This phase includes planting native vegetation along the streambank, constructing a footbridge over the creek, and monitoring fish populations and water quality in the area. These activities will involve youth from the Chilkat Forest Investigators’ after school outdoor science program, as well as recreational anglers. The project will restore the stream and enhance habitat for species important to the recreational and subsistence fishing communities. The culvert removal was funded by the U.S. Fish and Wildlife Service. This work is being conducted as part of the Southeast Alaska Fish Habitat Partnership.

The Hood Canal Salmon Enhancement Group is working with recreational anglers to better understand the distribution of coastal cutthroat trout. These efforts will inform selection of habitat restoration sites in watersheds that would provide the greatest benefit to the species. To date, the project team has:

The final phase of the project will invite anglers to participate in restoration of native plant species. They will be planted in watersheds that are identified through the genetic sampling as critical to the cutthroat trout’s freshwater rearing phase. This project builds on a range-wide coastal cutthroat trout assessment completed by the Pacific States Fisheries Commission in 2016. It fills an important gap in species’ distribution information. This effort is funded by and being conducted as part of the Western Native Trout Initiative.

Orange County Coastkeeper is working with the NOAA Fisheries West Coast Region and other partners to engage recreational anglers in eelgrass restoration. These activities are part of their habitat restoration program. Eelgrass provides important habitat for recreationally fished species such as halibut, croaker, white sea bass, and barred sand bass. To date, OC Coastkeeper has developed outreach materials for local landing and tackle shops about the importance of eelgrass and other coastal habitat to recreational fishing. Later this year, they are planning an eelgrass planting restoration event for local anglers. They are also planning additional events to reach a larger audience, including participation in a NOAA Day at the Long Beach Aquarium. This work is being conducted as part of the Pacific Marine and Estuarine Partnership.

Lynnhaven River NOW recently used 10,000 bushels of recycled oyster shells to complete construction of a one-acre shell reef in the Lynnhaven River in Virginia. The reef location was selected after extensive dialogue with local recreational fishermen. The team ultimately chose a site that is protected from strong winds and provides safe fishing opportunities for anglers in small boats. Similar to reefs previously constructed in the area, the new reef is expected to flourish and set oyster spat this summer. This will provide significant habitat benefits for multiple fish and bird species, and will continue to create fishing opportunities in the area. The reef will be called the Mary Lou Gayle Memorial Oyster Reef, in honor of an employee who was a victim of a shooting at the Virginia Beach city government office in 2019. Gayle worked with Lynnhaven River NOW and other local environmental groups to preserve space in the river for oyster reef restoration. This work is being conducted as part of the Atlantic Coastal Fish Habitat Partnership.

The National Fish Habitat Partnership funding opportunity continued in 2021 with projects in Louisiana, Maryland, Washington, and Alaska. The projects were funded by NOAA Fisheries through its Office of Habitat Conservation and Recreational Fisheries Initiative, in partnership with the Atlantic, Gulf,  and Pacific States Marine Fisheries Commissions.