Thirteen leatherback turtles were sampled and tagged off Beaufort, North Carolina, in May by NOAA Fisheries Northeast and Southeast Science Center staffs and colleagues, continuing a project begun in 2017 to assess the turtles abundance, movements, behavior, and health status. 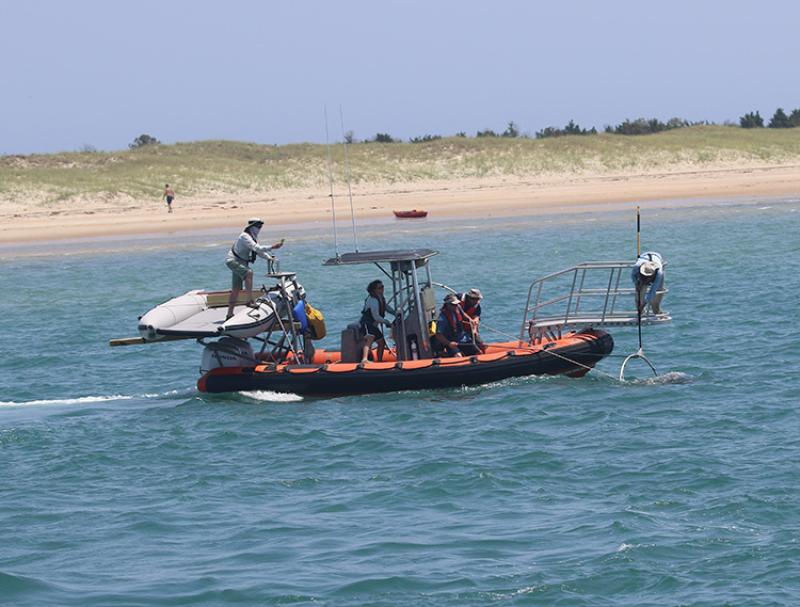 Despite challenging weather conditions, NOAA Fisheries researchers and colleagues captured and tagged a record 13 leatherback turtles May 14-22 off Beaufort, North Carolina, continuing a project begun in 2017 to assess the abundance, movements, behavior, and health status of these turtles. It is the second year this team has tagged leatherbacks off North Carolina, where the turtles aggregate in coastal waters during their northward spring migration.

Research was coordinated with Dr. Matthew Godfrey of the North Carolina Wildlife Resources Commission, who assisted in the field work. Haas and Matzen brought the Woods Hole Laboratory’s research vessel Selkie and an inflatable Takacat raft to provide field support. 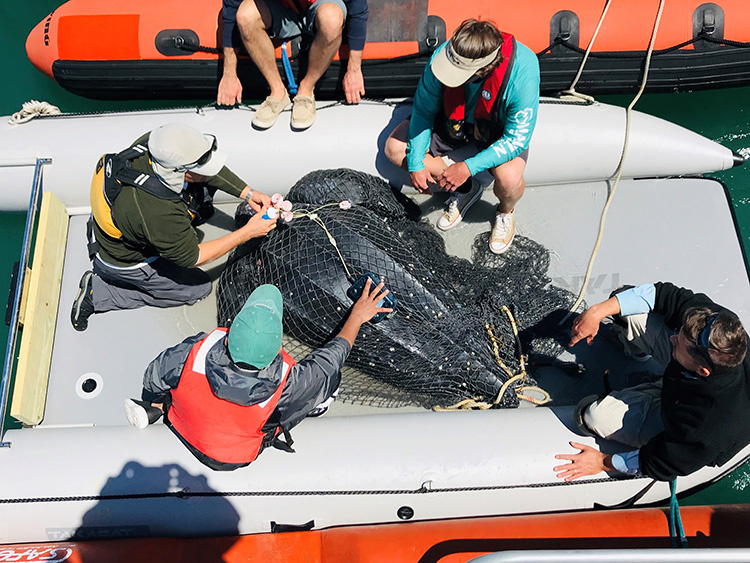 "We chose this location because of the relatively easy access to turtles and because they disperse widely after tagging, but it isn’t easy to get a leatherback weighing several hundred pounds onboard for all the sampling that needs to be done,” said Haas, whose role was to drive the Selkie while Matzen assisted  in leatherback captures. “We started a week later this year than last, which turned out to be a good decision as cannonball jellies, a major prey, were present and leatherbacks were in full force by the time we arrived. Despite a long stretch of windy weather, the experienced capture crew was able to surpass the seven tags we deployed last year, deploying 13 satellite tags and 3 suction-cup tags.”

The two-part field program involved satellite tagging and deploying two types of suction-cup tags, the first a homemade tag equipped with a high-resolution video camera that also recorded temperature, depth, and GPS location.  Staff from CFF, Mike James of the Department of Fisheries and Oceans Canada, and Haas built the tag last year. It is placed by hand on a free-swimming leatherback. The tag “sees” what turtles eat and how the animals interact with the environment and with fishing gear. That information will help researchers develop better strategies for mitigating entanglement risks.

The second, more sophisticated suction-cup tag underwent its first field testing, after development funded by CFF and design by a commercial firm with input from CFF staff and Haas. Researchers placed this second suction-cup tag on a captured leatherback while the turtle was on the raft; the researchers hope to work through the initial “kinks” and get this new tag ready for longer deployments in our region. 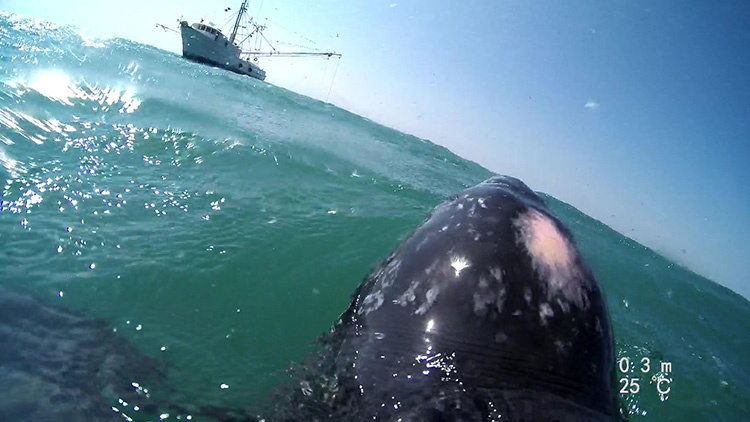 An image taken from a video camera in a suction-cup tag on a leatherback. Photo credit: NOAA Fisheries/Heather Haas

Two juveniles, 10 females, and 1 male were satellite tagged. Researchers had previously documented two of the females when the turtles were nesting in Trinidad and Coast Rica.  The team deployed three suction-cup tags, one was released from a turtle in rough seas, found and returned by diligent beach goers. The recovered tag was in great shape, the data were downloaded, and the tag is being prepared for its next deployment.

Using two small boats outfitted with bow pulpits and a third small, open-bow boat proved perfect for getting a leatherback turtle aboard between the two boats for research and tagging before release back to the water after about 15 minutes aboard. A spotter plane helped guide the surface boats to the turtles. 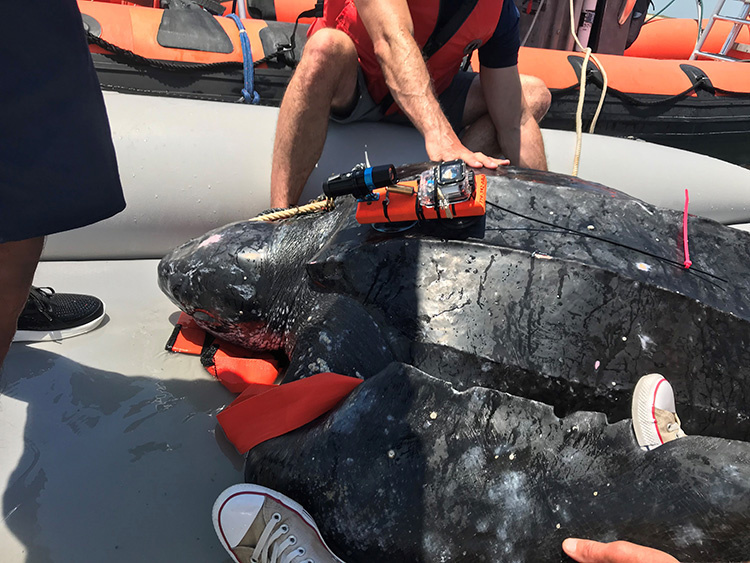 Once on the inflatable boat, researchers collected blood samples, took ultrasounds to look at the fat layer, and electrocardiograms to study heart activity. They also took internal temperature and collected a fecal sample, scanned for a PIT tag, attached a flipper tag, and attached a satellite tag to track the animal’s movements in the coming months. The team also documented existing injuries. One turtle had a series of propeller scars, another was carrying a hook and line, and another had a deformed front flipper.

Leatherbacks are the largest sea turtle, reaching lengths up to 8 feet and weighing up to 2,000 pounds.  The turtles could not be weighed from the small, open inflatable boat, but researchers did collect length, width, and body depth measurements. The smallest turtle captured and sampled had a carapace length of 50 inches, just over 4 feet. 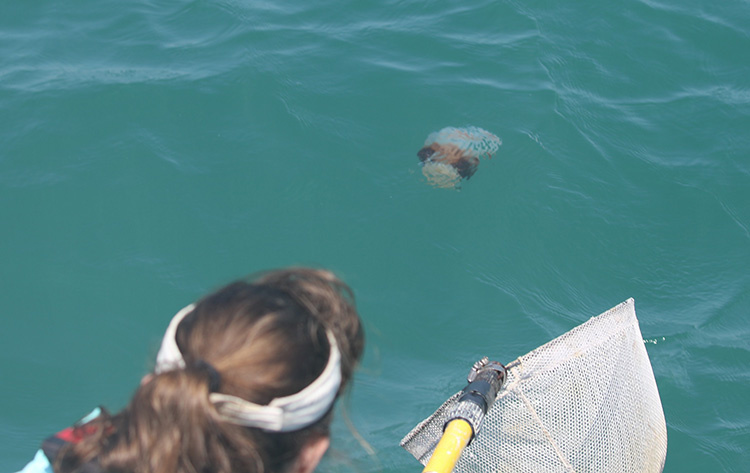 All of the satellite tags are transmitting. Most of the turtles have moved north of their tagging location, some as far as Delaware Bay, while a few moved slightly south.

The leatherback tagging and sampling project is part of the Atlantic Marine Assessment Program for Protected Species, a multi-federal agency research and monitoring program involving the Bureau of Ocean Energy Management, the U.S. Navy, the U.S. Fish and Wildlife Service, and NOAA Fisheries.  This program is collecting data on protected species in the Atlantic Ocean to understand the potential effects of ocean energy development on these species relative to long-term climatic changes in the environment.