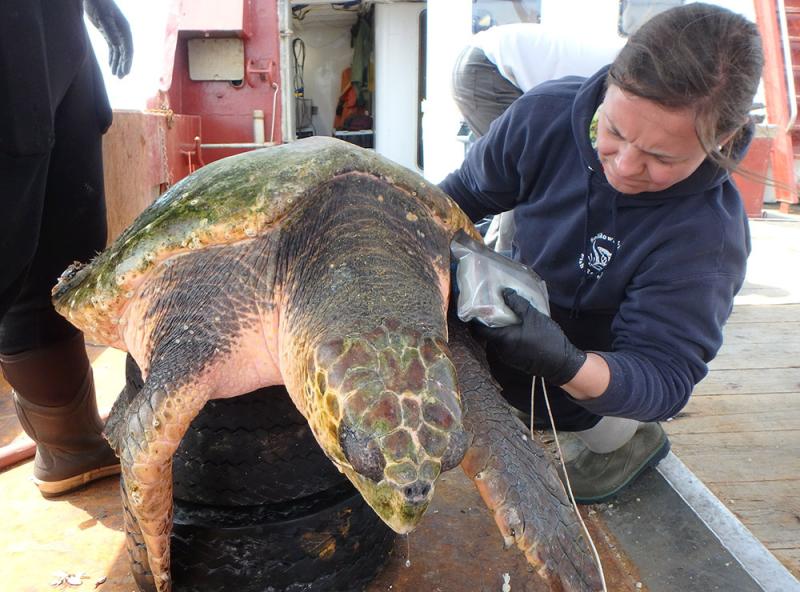 Researchers tagged a record 35 juvenile and adult loggerhead sea turtles May 20-26 in southern Mid-Atlantic waters. The effort is part of an on-going study begun in 2009 to learn more about loggerhead turtle movements and behavior, and to better understand their interaction with sea scallop fishing gear.

"Both NEFSC and CFF have been devoted to developing this long-term time series,” said Heather Haas, a turtle researcher at the NEFSC who has been involved since the beginning of the project. She was tagging leatherback turtles this year and missed the loggerhead trip. “We are interested in possible changes in turtle distribution, abundance, and behavior, and these dedicated time series form the foundation for being able to assess changes through time.”

Aboard the F/V Kathy Ann, each loggerhead was weighed, measured, and had biological samples taken. Each was then outfitted with a satellite-linked data logger, or Argos satellite tag, that continually records the depth and temperature where the turtle goes, then transmits the data back to researchers via satellite. Each turtle was also outfitted with more conventional flipper and PIT (passive integrated transponder) tags, and then released back into the ocean. Most of the turtles were out of the water for less than an hour.

“We had beautiful weather with light breezes from the south and southwest and calm seas, which made seeing the turtles very easy,” said Patel, who has been involved with the annual study since 2014. “We were able to capture and tag 12 turtles one day, and 14 another day, another record for the project. We had 45 tags with us and expected to put out about 20, but we got lucky.”

Fecal samples were also collected. Researchers are looking for the presence of nematodes, a type of worm found in some scallop meats. Loggerhead diets within the Mid-Atlantic include scallops, other bottom-dwelling animals, and gelatinous zooplankton.

The biological samples collected from the turtles for genetic and health assessment studies will be analyzed to assess sex and foraging behavior. Some of the results will be available within weeks, while other findings will require months to produce. The tags, however, work from the time they are submersed in salt water.  Since large juvenile and adult turtles grow slowly, the tags could remain on these animals for many months, and possibly a few years.

“We have learned how to be efficient through years of experience,” Patel said. “The captain of the Kathy Ann has been doing this with us since 2009 when he worked as a crew member, so he is very familiar with what we are trying to do. Two members of the crew helped capture the turtles and get them aboard, and the rest of the science team conducted the sampling. It went very smoothly.”

A portion of the tagging project is funded from an award to CFF through the sea scallop industry's research set-aside program that provides an opportunity for the research organizations and fishermen to collaborate on long-term scientific goals. The multi-agency Atlantic Marine Assessment Program for Protected Species (AMAPPS) initiative provides supporting funds.

“Without the support of researchers at the NEFSC and NOAA’s scallop research set-aside program, AMAPPS, and the scallop industry through Viking Village, we would not be able to do this work,” Patel said.

Over the past ten years, the collaborative project has satellite-tagged approximately 200 loggerhead turtles in the mid-Atlantic. Many of the tagged turtles can be tracked on the NEFSC’s turtle tagging web site. Tracking information from the recently tagged turtles should be available in the near future.

“The data we have been collecting will be an important part of the National Protected Species Toolbox Initiative being developed by NOAA Fisheries,” said Hatch.  “We will be able to overlay loggerhead distribution with scallop fishing areas, and to monitor shifts in their population.”

The satellite tags provide detailed information about turtle behavior at sea, especially in commercial fishing areas where juvenile loggerheads are the most common incidentally-caught sea turtle in fishing gear. The information gathered from the data loggers can be used to define areas where turtles are most at risk of encountering fishing gear. Loggerheads, like all sea turtles found in U.S. waters, are protected under the Endangered Species Act.