Restoring the Herring River in Wellfleet and Truro, Massachusetts

We are part of a team of federal, state, and town agencies and private organizations working to restore the Herring River system. 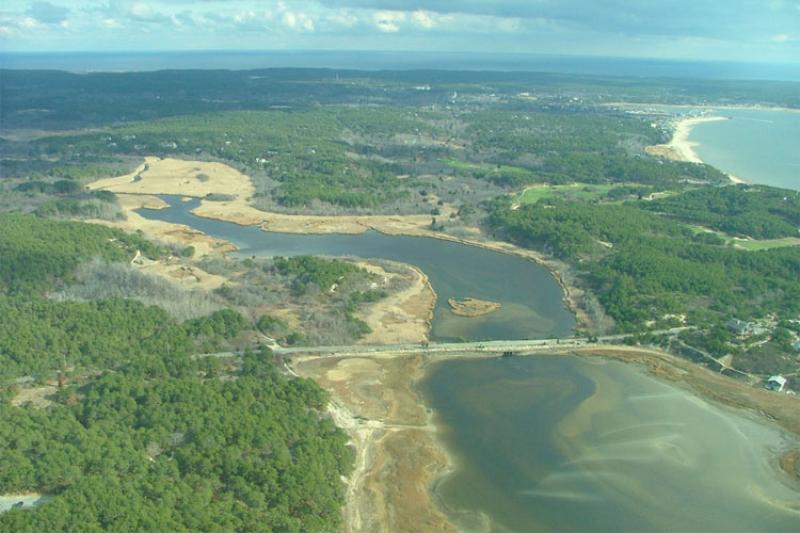 In the late 1800s, the Herring River in Wellfleet, Massachusetts was an expansive salt marsh and estuary. Here, young fish found habitat for growth and shelter, while river herring and shellfish harvests fueled the local economy. That all changed in 1909. A dike installed at Chequessett Neck Road blocked the tides that for 2,000 years had carried oxygen-rich ocean waters into the Herring River system twice a day. The dike also blocked the sediment supply carried upstream by the tides, which had allowed the marsh to grow and keep pace with sea level rise for thousands of years.

Within a few decades, the previously robust salt marsh within the 1,100 acre flood plain was reduced to less than 10 acres. Fish, shellfish, and other wildlife lost important habitat and food sources. Water quality also deteriorated due to the decomposing salt marsh and poor tidal flushing.

Today, dissolved oxygen, which enables aquatic animals to breathe, is at dangerously low levels throughout much of the system. Without tidal flushing, fecal coliform bacteria have been concentrating at the river's mouth. Due to the high bacteria levels, Massachusetts Division of Marine Fisheries has closed acres of once-productive and heavily harvested oyster beds.

River herring populations in the Herring River are a fraction of what they once were, and marine fish species are no longer able to access the vast majority of the former marsh surface and marsh channels. This degradation will continue as long as the existing Chequessett Neck Road dike remains in place.

We are part of a team of federal, state, and town agencies and private organizations working to restore the Herring River system.  The idea is to replace the existing dike at Chequessett Neck Road with a 165-foot wide bridge, fitted with gates that will allow the controlled, incremental restoration of the tide to the Herring River. The team developed a way to restore the Herring River while protecting the infrastructure that was constructed in the floodplain during the past 100+ years. The project will be implemented carefully and incrementally according to an adaptive management plan supported by extensive monitoring. 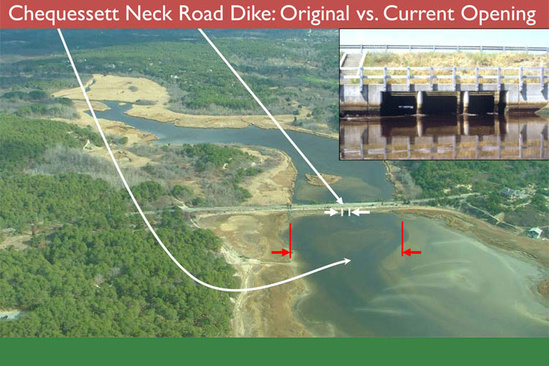 Benefits of the project will include:

The restoration team is currently developing regulatory permit applications and plans to submit its first application in Fall 2018. Project construction is slated to start in 2022.