Ribbed mussels can remove nitrogen and other excess nutrients from an urban estuary and could help improve water quality in other urban and coastal locations, according to a study in New York City's Bronx River. 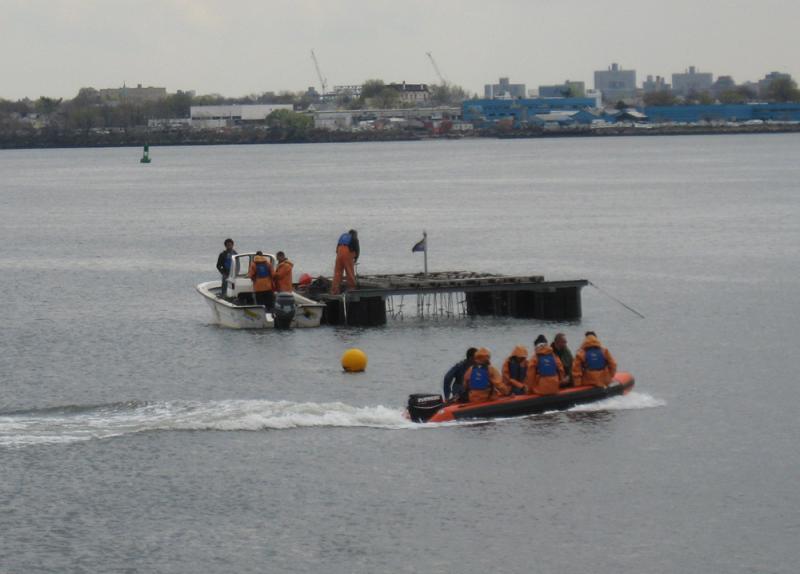 Researchers at NOAA Fisheries Milford Laboratory in Milford, Connecticut began the two-year pilot project in June 2011. They used a 20 x 20-foot raft with mussel growing lines hanging below as their field location in an industrial area near Hunt’s Point in the South Bronx, not far from a sewage treatment plant. The waters were closed to shellfish harvesting because of bacterial contamination.  Scientists monitored the condition of the ribbed mussels (Geukensia demissa) and the water quality over time to see how each responded.

“Ribbed mussels live in estuarine habitats and can filter bacteria, microalgae, nutrients and contaminants from the water,” said Julie Rose, a research ecologist at the Milford Laboratory, part of the Northeast Fisheries Science Center, and co-author of the study. “They are native to the East Coast so there are no concerns about invasive species disturbing the ecosystem, and they are efficient at filtering a variety of particles from the water. Ribbed mussels are not sold commercially, so whatever they eat will not be eaten by humans.”

Farming and harvesting shellfish to remove nitrogen and other excess nutrients from rivers, estuaries and coastal waters is known as nutrient bioextraction, or bioharvesting. Mussels and other shellfish are filter feeders, and as the organisms grow, they take up or assimilate nutrients in algae and other microorganisms filtered from the surrounding waters.

Nitrogen, phosphorus and other nutrients occur naturally in the environment and are needed by plants and animals to grow, but too much of any of them is harmful.  Excess amounts from human activities often end up in rivers, streams and coastal environments, causing algal blooms, loss of sea grass and low oxygen levels in the water, which can kill large numbers of fish and other organisms.

Researchers found that the Bronx River mussels were generally healthy, and their tissues had high amounts of a local nitrogen isotope, indicating that they removed nitrogen from local waters. They also had lower amounts of trace metals and organic contaminants than blue mussels (Mytilus edulis) collected from the seafloor nearby. An estimated 138 pounds of nitrogen was removed from the river when the animals were harvested.

The researchers estimate that a fully populated 20 x 20 foot mussel raft similar to the one used in this study would clean an average of three million gallons of water and remove about 350 pounds of particulate matter, like dust and soot, daily. When harvested, the animals could be used for fertilizer or as feed for some animals, recycling nutrients back into the land.

An additional finding of the study related to larvae for mussel growth. The mussel raft was located at the confluence of the East River Tidal Strait and the Bronx River in a high nutrient, low-chlorophyll system, making the site unsuitable for large-scale mussel growth. Future projects using ribbed mussels for nutrient remediation will need spat or larvae from another location or from hatchery production.

“Management programs to reduce the effects of excess nutrients in the water have largely focused on land-based sources, such as human and livestock waste, agriculture, and stormwater runoff,” said Gary Wikfors, Milford Laboratory Director and co-author of the study. “They really haven’t looked much at recovering the excess in the water itself.  Nutrient bioextraction using shellfish is becoming more common, and this study demonstrated that it could be an additional tool for nitrogen management in the coastal environment.”

The Bronx study is the first to examine the use of ribbed mussels for nutrient bioextraction in a highly urbanized estuarine environment. A previous study comparing the Bronx River to the more productive Milford Harbor, Conn. estuary indicated that ribbed mussels were able to adapt in just a few days to low food availability and feed with the same efficiency in the Bronx River site as populations at the Milford River site. That study also supports the use of ribbed mussels as a management tool for nutrient bioextraction in a range of coastal environments.