Scientists are using a variety of real-time tools, from moored buoys to autonomous underwater vehicles, to detect the presence of baleen whales and record the sounds they make. One active buoy is located south of New York City and another, which was recen 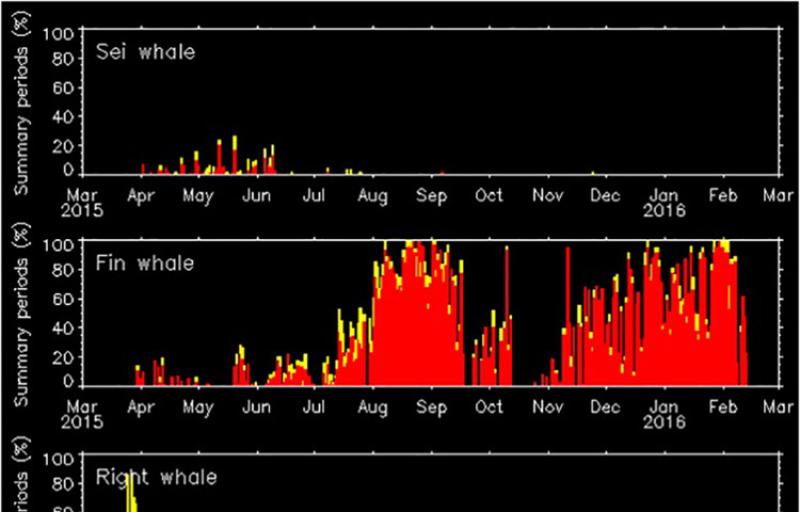 Scientists are using a variety of real-time tools, from moored buoys to autonomous underwater vehicles, to detect the presence of baleen whales and record the sounds they make. One active buoy is located south of New York City and another, which was recently retrieved, was located off the Massachusetts coast south of Martha’s Vineyard.

If you want to know if any whales were recently detected by these buoys on any given day and of what species, you can find out on a website called Robots4Whales. The publically accessible website is a collaborative project between scientists in the Passive Acoustics Group at NOAA’s Northeast Fisheries Science Center (NEFSC) lab in Woods Hole and the nearby Woods Hole Oceanographic Institution (WHOI).

“The near real-time data helps scientists find whales in unexpected places, which is important as their migratory patterns are changing,” said Julianne Gurnee, an analyst at the NEFSC’s Passive Acoustics group who reviews the data coming in each day. “It helps mitigate ship strikes by alerting ships to where the whales are so they can avoid them. The data are also helpful to direct survey teams to whale locations more quickly for photo identifications, biopsies and tagging.”

The various stationary and mobile platforms are equipped with a real-time detection system and underwater microphones, called hydrophones, to listen to four species of baleen whales: seis, finbacks, humpbacks, and endangered North Atlantic right whales. Data are recorded around the clock, but due to the volume and satellite limitations the platforms send samples back to shore every two hours. The data are automatically uploaded onto the website, where they are analyzed by Gurnee.

The buoy locations, off Nomans Land south of Martha’s Vineyard and outside of New York Harbor in the New York Bight, are important. The recently retrieved Nomans Land buoy was located at the center of three gunnery ranges operated by the US Coast Guard, and the New York Bight buoy is located between shipping lanes into New York Harbor. With fishing and wind development activities in the area as well, whales passing through these waters could experience ship strikes or other impacts.

During the Nomans Land buoy deployment,  Coast Guard Station Woods Hole received an email notification when right whales were detected  in the area. The station could then decide how it could reduce the impact of its operations, specifically any gunnery exercises planned at the nearby ranges, on whales in that area.

Automated notification can also be sent to mariners to alert them to the presence of whales in the area and to voluntarily reduce ship speeds. Ship strikes are one of the largest causes of mortality for the endangered right whales, of which there are only about 450 known to exist.

The automated low frequency detection and classification system (LFDCS) on the buoys and gliders was developed by collaborating scientist Mark Baumgartner at WHOI. The software system automatically classifies the sounds and creates a spectrogram, or a visual display of sound on the x- axis and frequency on the y-axis and draws a contour line or pitch track through sounds it picks up. Since each species has clearly identifiable vocalization patterns, Gurnee analyzes the data to confirm its authenticity as a whale sound from a specific species and not an anthropogenic or human-made sound or error.

“I log into the site three or four times a day and review the data,” Gurnee said of the process. “Although the system is pretty accurate, it can make errors. Human analysis is essential to verify the sounds and patterns and put them into context, especially since the sounds are changing from year to year.”

When the instruments are retrieved or serviced, Gurnee can access the full data set with audio and confirm real-time detections, verify unusual patterns or identify other sounds. She has been working on data validation from the Nomans Land buoy and from two autonomous underwater gliders, used for a few months at a time in the Great South Channel. The data from these platforms shows a change in migratory patterns over time, with whales more spread out along the coast during the year rather than migrating north and south at set times like they did a decade or so ago.

“We are learning a lot about whales in the area, and the Coast Guard has been very supportive and appreciative of the information they receive,” said Gurnee, a Washington state native who first came to the NEFSC in the summer of 2013 as a NOAA Hollings scholar to work with the passive acoustics group. She returned to the NEFSC full-time not long after graduation from Oregon State University with a B.S. in zoology in 2014 and has worked as an analyst on a number of projects since, but Robots4Whales is her primary focus these days.

“The Coast Guard conducts gunnery exercises near Nomans Land in the spring, which happens to be the time when many right whales are in the area around Martha’s Vineyard,” said Gurnee, who has conducted multiple training sessions for cadets  from the Coast Guard Academy in New London, CT to use the system to detect whales, and as a quality control method for analyses. “We are working with the Coast Guard to see if the exercises could be held at another time of year when fewer whales are in the area.  The data are being used for something good, and the alerts have been respected. That is positive news for whales.”