Saltwater Recreation and a Cuban Vacation 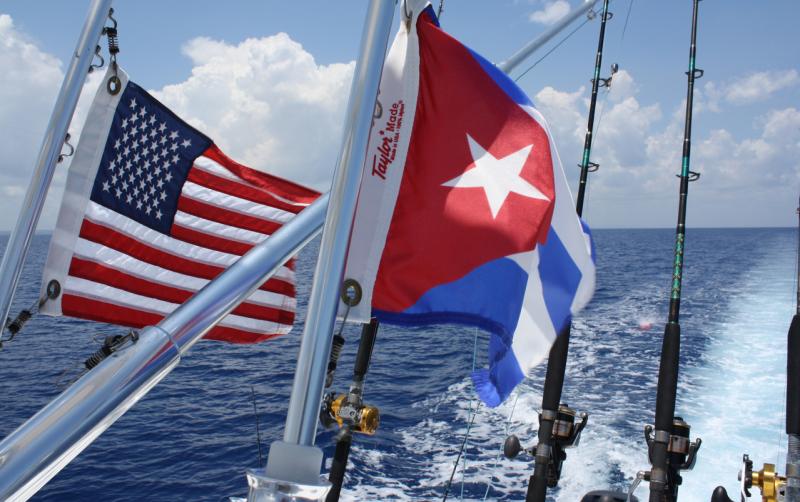 American literary legend Ernest Hemingway was so enamored with Cuba that he established a winter residence in the capital of Havana from 1939 to 1960. During that period he wrote some of his most memorable works: For Whom the Bell Tolls, A Moveable Feast, and his classic novella, The Old Man and the Sea. He frequented the neighborhood bars and fished the Caribbean waters, keeping an eye out for German U-boats during World War II. The affable and respected author and fisherman was so much a part of the local fabric that an annual fishing tournament was named for him in 1950. Papa Hemingway won the competition the first 3 years in a row.

Then, in 1961 those good times came to an end when the United States and Cuba severed diplomatic relations. The Hemingway Tournament continued on, but U.S. anglers were largely absent as a result of the restrictions set in place by the U.S. government. That is, until now.

This year the United States and Cuba reestablished diplomatic relations. Relaxed travel restrictions allowed U.S. anglers to participate in the 66th Annual Hemingway Fishing Tournament. One of those anglers was NOAA Fisheries Southeast Regional Recreational Fishing Coordinator Sean Meehan. Here’s what he had to say about the experience:

I’ve been fishing as long as I remember. My dad was a weekend charter boat captain and I worked as a mate on fishing boats in the Bahamas, Puerto Rico, and the Virgin Islands. I’ve mainly competed in sailfish and billfish tournaments in the United States but I have served as an observer on some Virgin Islands tournaments.

I’m not a huge tournament angler but it’s an opportunity to fish (which I love to do) with other people who love to fish. It’s interesting and challenging. The competition throws another dimension on top of fishing for fun and I can learn new ideas, techniques, styles, and methods from other people I meet.

Tourist travel to Cuba is still restricted by the U.S. government. Was it difficult to get travel approval?

It’s not difficult to get approved for this type of travel. There are 12 categories under which American citizens can visit Cuba and this trip fell under two of those categories: people-to-people exchanges and athletic (I use that term loosely) competition.

How many boats and anglers participated in the tournament?

This year there were close to 100 boats total. The Stuart Sailfish Club (Key West, FL) served as a sister club to the Havana Fishing Club. They organized 52 boats and came down as a fleet.

My team brought our own vessel. There were four of us. I was the mate and worked the “pit” (short for cockpit), so I was working the back of the boat, rigging lures and bait. We also had two anglers and a captain on board.

It was an honor to be able to go and fish. It speaks to fishing as a universal activity. It transcends politics and borders. One of the most remarkable things I found was how nice everyone was. People were so warm, so accommodating. I was taken aback. I hope that doesn’t change with more visitors to the island. It was a really lovely thing to see how genuinely nice people were. Plus, we got to drive around in a 1948 Dodge the whole time. Well over 60 percent of the cars there are pre-1960s American cars, but they’re all retrofitted with Korean diesel engines. The food was phenomenal and I had a daiquiri where Hemingway drank his daiquiris. I even sat next to his statue at the bar. The sea wall, the mountains, the buildings–all the classic things about Cuba were amazing, but you have to remember that people still have their challenges down there.

We stayed at a house (“casa particular”) licensed for rent by the Cuban government in the Santa Fe neighborhood. Some people stayed at hotels and some stayed on their boats. Our boat was too small to stay on.

How was the fishing? What did you catch?

(Laughs) I was dreading this question. We caught one barracuda the whole time. The fishing was tough. The water was hot—84 degrees—and it was a little late in the season for marlin. The tournament averaged maybe 12 to 15 billfish a day and there were 96 boats, so the fishing was challenging.

How were teams scored? Who won the tournament?

The tournament officials give you a sticker with a certain color on it and it changes every day. We had to take three photos of the fish with the sticker when it’s caught, tagged, and released. You also have to call in when you hook and release the fish. The photos are time-stamped for comparison. Even if you hook a fish and it gets away, you still have to alert the marina when you hooked the fish and how long it was on the hook.

Teams were awarded 500 points for a blue marlin, 400 points for a white marlin, and 300 points for a sailfish or spearfish. Points are based on size and difficulty to catch. And you’re not allowed to kill the billfish. In fact you’re penalized for any dead billfish. We were allowed to take dolphin (mahi mahi), wahoo, and tuna since they’re edible, pelagic, sustainably harvested species. But there weren’t that many weighed during the tournament.

A team named Unbelievable won. They caught zero fish until the fourth day (last day of the tournament) and that’s when they ran into a hornet’s nest of blue marlin and caught four of them.