Research aims for baseline information on whale behavior and biology in absence of vessels. 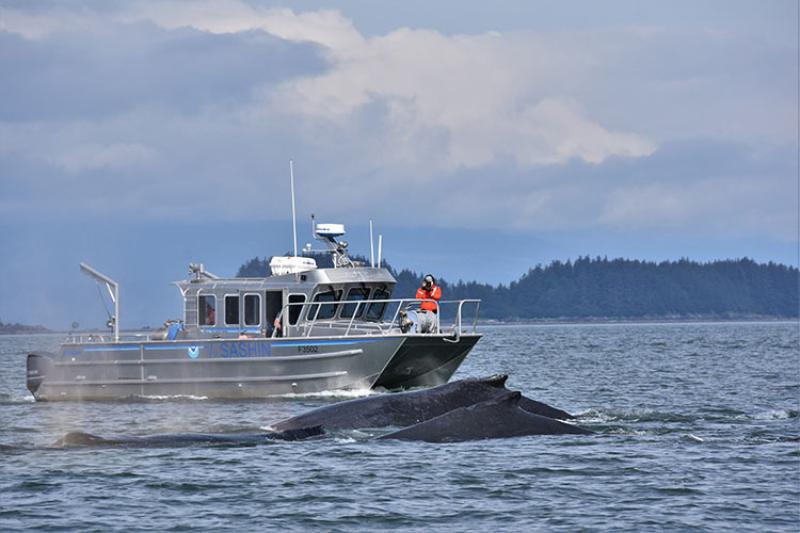 It’s an unusual year out on the water near Juneau, Alaska.

Normally a throng of tourists would arrive in Juneau on cruise ships. They would board one of the more than 65 whale watching vessels for an opportunity to see whales.

Juneau is a premiere location for whale watching, especially humpback whales. Humpbacks migrate to Alaska each spring to feed in the nutrient-rich waters and build up fat stores through the summer. Then they migrate back to Hawaii, Mexico, and other areas of the Pacific Ocean in the fall to breed and calve in tropical waters over the winter. They frequently breach, blow, and dive—showing their tail flukes. If whale-watchers are lucky, they may even get to see humpback whales engaged in “bubble net feeding.” This rare cooperative feeding method occurs in only a few areas around Alaska.

Because the whale watching industry in Juneau has tripled in the past two decades, there is concern about potential impacts of whale watching vessels on humpback whales. Prior studies indicate that humpback whales tend to increase speed, change direction, and breathe faster in the presence of vessels. The findings indicate that humpbacks may be taking measures to avoid vessels.

But this year, it is relatively quiet on the water. There are few tourists and just a sprinkling of whale watching vessels in areas that are normally bustling with activity.

Marine mammal scientists have been studying humpback whales in southeast Alaska for decades, but never before in an environment so devoid of human activity. The oddity of 2020 presented a unique research setting.

“When I learned back in March that the cruise ship season would be postponed or even suspended for the summer, I realized we had this incredible opportunity to study whales in the absence of high levels of vessel traffic,” said Heidi Pearson, principal investigator for the study. “This set up a natural experiment that enables us to establish a baseline of whale behavior and physiology that can be compared with past and future ‘normal’ years.” 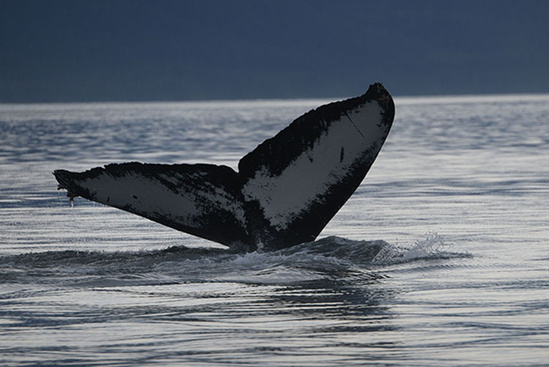 Humpback whales are individually identifiable by the underside of their flukes. Researchers have been using carefully timed photographs of the flukes snapped as a whale raises its flukes for a sounding dive to document and catalog individuals since the 1960s. Most of the humpbacks that visit the Juneau area are cataloged and the team can generally identify each animal in the field. Researchers this season will be looking to document all humpback whales—new and returning—that visit the Juneau area during this strange and quiet year. They will also match any collected biopsy samples and other biological data to the individual matched humpback whale.

“The goal of this project is to determine humpback whale presence, local abundance, and residency patterns as a baseline,” said Suzie Teerlink, a marine mammal specialist with NOAA Fisheries Alaska Regional Office in Juneau. “We will also measure stress steroid hormone biomarkers through biopsy blubber samples and collection of ‘blow’ during the whale’s exhalation—otherwise known as whale snot.”

Learning About Whales through Snot, Blubber, and Skin 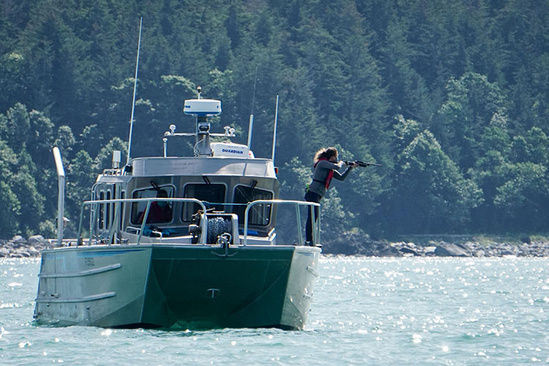 Teerlink stands on the port side of the bow of the R/V Sashin, a NOAA research vessel. She raises her modified 0.22 rifle to her shoulder, aims, waits for the whale to dive and then fires – launching a stainless-steel tipped biopsy dart at a humpback whale 10-20 meters from her. Scientists use this standard method – with either a crossbow or small caliber rifle—under research permits from NOAA Fisheries to collect a small skin and blubber tissue core from large whales. The sample itself is a bit smaller than the eraser end of a pencil.  Whales oftentimes hardly notice when the dart hits them. The floating dart is then collected and tissue samples are removed from the arrow tip using sterile tweezers, and placed in vials to be analyzed later in the lab. 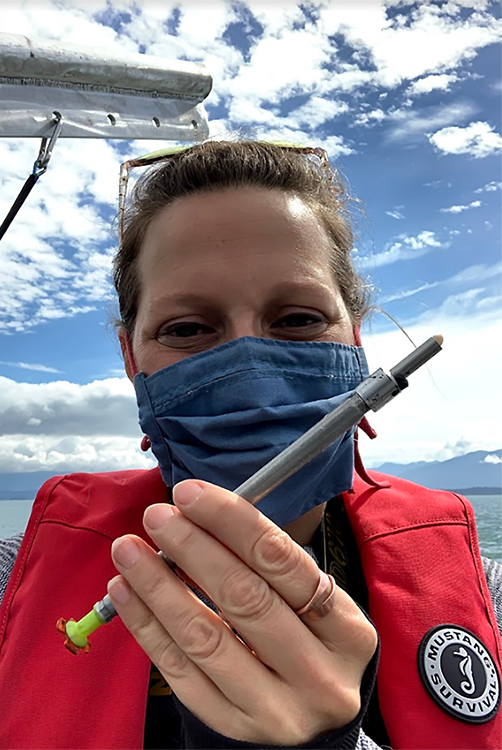 To collect respiratory blow samples, scientists will fix a sterile petri dish to a drone using Velcro. A specially trained scientist will then fly a drone at 30 meters above an individual whale and wait until it comes up for air. When it appears the whale is surfacing, the drone will slowly lower and approach the whale from behind. Using live video feed from the drone, the operator will time the drone to be positioned no lower than 3 meters directly above the blowhole just as the whale exhales.

Once the sample is collected, the drone will land and the petri dish will be removed and prepared for later processing in the lab.

Shannon Atkinson, a professor at the University of Alaska Fairbanks and co-principal investigator for the study, will lead laboratory analysis with an emphasis on hormones.

Data to Support Humpbacks and Humans

They will compare data collected during the summer of 2020—a year with limited whale-watching activity—with data collected previously by NOAA Fisheries, UAS, and UAF during years of normal whale-watching. Participating scientists hope this information will inform potential modifications to whale watching guidelines to ensure a sustainable whale-watching industry into the future.

“Over the years, as we have studied humpback whales in the Juneau area, one of the challenges is not knowing what ‘normal’ is for humpback whales in this area and if there are adaptations or consequences of feeding in what is possibly the largest hotspot for whale-watching in the world,” added Teerlink. “As the management agency for humpback whales, the lack of these baseline data has made it especially challenging for NOAA Fisheries to properly evaluate potential impacts and support continued recovery of the species. This is a rare and unexpected situation to fill in some of these data gaps.”