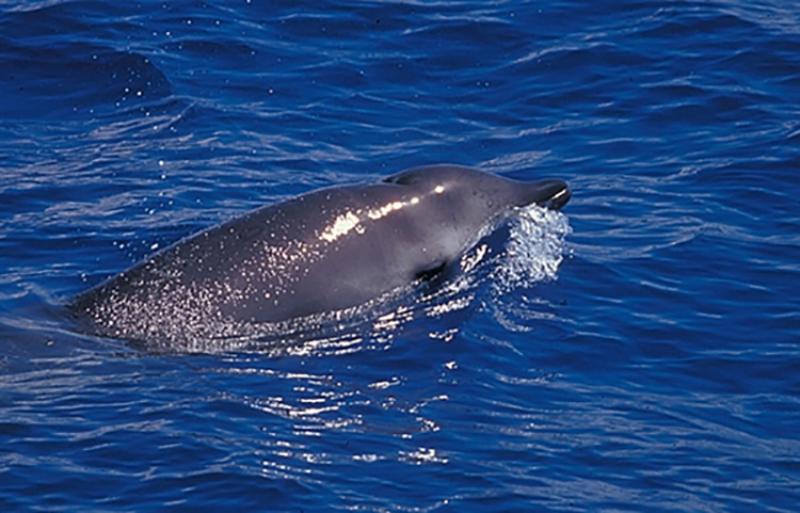 The findings by NOAA scientists from the Northeast Fisheries Science Center (NEFSC) in Woods Hole, Mass. and a colleague now at Hydroacoustics Inc in Rochester, NY were recently reported in the Journal of the Acoustical Society of America.

“Much of what we know about beaked whales and their dive depths is from two or three species, and from a few locations. We know so little about Gervais’ and True’s beaked whales, but now we know something about how deep they dive and at what depths they are foraging, so this is a step forward,” said Annamaria Izzi DeAngelis, lead author of the study and a marine mammal researcher in the passive acoustics group at the NEFSC.

The linear towed array is made up of a long cable to which a depth sensor and a series of eight hydrophones - underwater microphones - are attached. The array is towed 300 meters, roughly 1,000 feet, behind the NOAA Ship Henry B. Bigelow to reduce the ship's noise on the array.  It is a passive acoustic approach, meaning the array just listens and doesn’t emit any sounds, while active acoustics such as echosounders (also called fish finders) are devices making noise and then listening for that sound.

Scientists used acoustic recordings collected over 33 days in July and August 2013 from the Henry B. Bigelow in waters from New Jersey to southern Canada along the continental slope and the floor of the deep sea. The data were gathered as part of an annual survey of marine mammals in the North Atlantic conducted by the NEFSC.

Descriptions of clicks, high frequency sounds made by marine mammals, exist for Northern bottlenose dolphins and for Cuvier’s, Sowerby's and Blainville’s beaked whales, but next to nothing is known about the remaining North Atlantic beaked whale species, and especially about True’s beaked whales. What little information there is comes from dead stranded animals.

The human ear can't detect the higher frequency clicks made by beaked whales. “Since we cannot rely on our hearing, we use spectrograms to see the sounds,” DeAngelis explained. A spectrogram provides a visual image of the whales' frequencies.

“We had two click types, one that we identified as Cuvier’s beaked whale and another that looked similar to Gervais’ but could also be True’s beaked whale,” DeAngelis said. Distinguishing True’s clicks is difficult since nothing is known about them, which led DeAngelis and colleagues to use a Gervais’/True’s category for Mesoplodon clicks.

Beaked whales live in deeper waters offshore, are skittish, and spend little time on the surface, making it difficult to see them to study their behavior. Researchers believe the clicks occur when the whales are foraging, starting at around 400 meters depth (about a quarter-mile deep) and continue as they descend to find food, sometimes down to 3,000 meters (just under two miles deep). Since placing tags on individual animals is time-consuming and difficult to do, passive acoustics - devices that can listen for and record information about sounds the whales make - provide another option.

“When tags that record depth over time are attached to individual animals, we get high resolution dive profiles on a small number of individuals in specific locations. The hydrophone array collects lower resolution information but on a large number of animals all over the world,” DeAngelis said. “Because it is hard to tag beaked whales and towed linear hydrophone arrays are commonly used in marine mammal passive acoustics, this method opens doors to allow more depth and ecological data to be collected on a wider range of beaked whale species.”

Depths of beaked whales were calculated by using the time difference between when a click was first received by the array and the time it took for its surface-reflected echo to also reach the hydrophones. Pamguard, a free open source computer program, provided a two-dimensional position for the clicks, and another code, developed by study co-author Robert Valtierra, extracted the time difference between the direct arrival of the click and the surface-reflected arrival. Combining the 2-D position with the time delay between a click and its surface reflection provided the depth of a foraging beaked whale.

Gervais' beaked whales (Mesoplodon europaeus), sometimes called the Antillean or Gulf Stream beaked whale, grow 15-17 feet long and weigh about 2,640 pounds. They are usually found alone or in small social groups and feed on squid, shrimp and small fish. They live in the deep warm waters of the Caribbean, Gulf of Mexico and East Coast of the U.S. south of New England. They are also found in the eastern North Atlantic from the British Isles to western Africa.

True’s beaked whales (Mesoplodon mirus) are medium sized whales that are hard to distinguish from Gervais’ and other beaked whales. They are found in warm temperate waters off the U.S. East Coast and southern Canada, off the British Isles and western Europe, off western Africa and South Africa, and south of Australia. The first underwater footage of a True’s beaked whale was recorded in 2013 off the Azores in the North Atlantic.

Cuvier’s beaked whales (Ziphius cavirostris) are one of the most sighted and studied beaked whales in the world. Sometimes called goose-beaked whales, they can reach lengths of 15-23 feet and weigh 4,000 – 6,800 pounds.

Cuvier’s beaked whales live in temperate, subtropical and tropical waters and prefer the deeper waters of the continental slope and areas around steep underwater geologic features like seamounts and submarine canyons.

The study was funded by NOAA Fisheries, the U.S. Navy N45 Program, and the Bureau of Ocean Energy Management. Data were collected as part of the Atlantic Marine Assessment Program for Protected Species (AMAPPS) program.