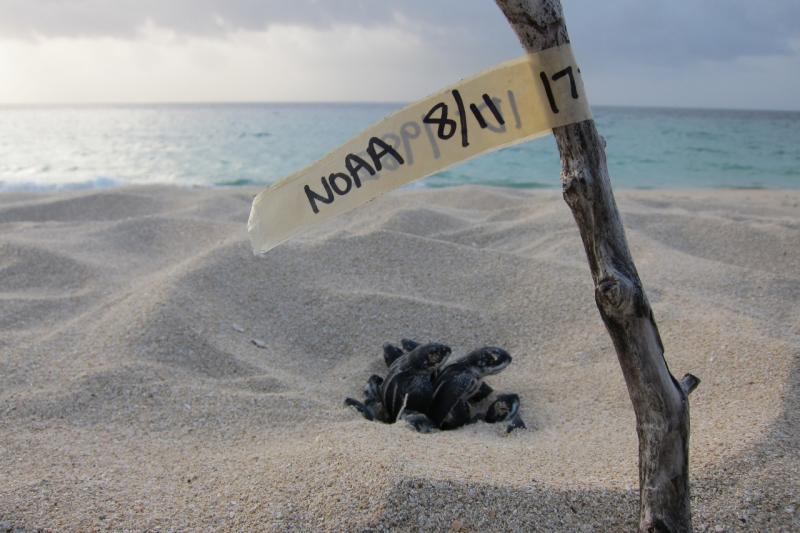 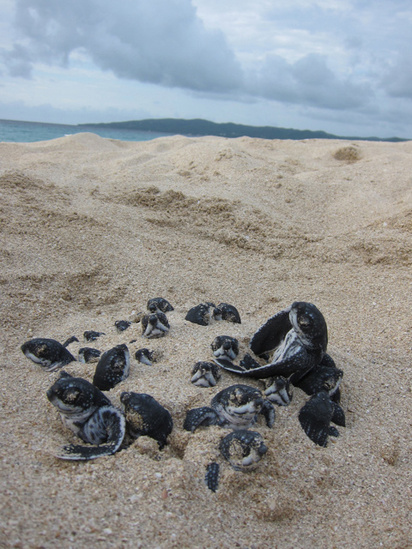 Leatherback hatchlings beginning to emerge from the sand at Sandy Point.

Just like forensic scientists use DNA fingerprinting to solve a crime, scientists can study sea turtle DNA to unlock important clues about their biology.

“Hidden in a hatchling’s DNA is its entire family history, including who its mother is, who its father is, and to what nesting population it belongs,” says NOAA scientist Peter Dutton, who studies the DNA of endangered leatherback sea turtles. “By applying DNA fingerprinting, we can answer many elusive questions about sea turtle mating and reproduction patterns.”

Studying these genetic signatures also helps managers determine where population boundaries are, where to focus conservation efforts, and what threats might be population specific.

Now NOAA scientists and partners are taking their genetic research one step further. They are going beyond the population level to investigate individuals and collect evidence on life history, mating strategies, and how individuals form family groups.

Refuge Lays the Groundwork for Discovery 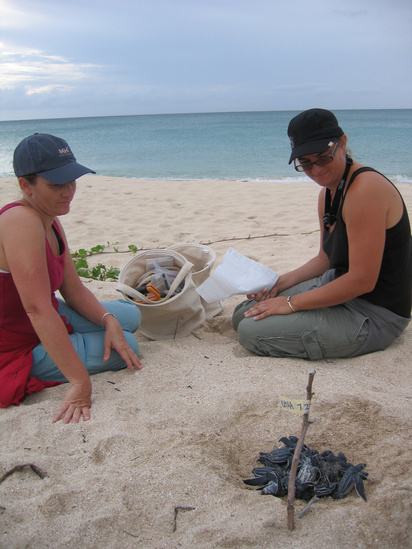 NOAA staff members Erin LaCasella and Amy Frey watch over an emerging nest to protect it from predators.

Nesting females have been a key to unlocking this genetic puzzle. Sandy Point National Wildlife Refuge in St. Croix, U.S. Virgin Islands is one of the most important and intensely monitored leatherback nesting beaches under U.S. jurisdiction. Here, scientists have been busy gathering data on nesting females since 1977. Scientists use flipper and passive integrated transponder tags to identify the turtles and keep a record of the number of clutches (nests) each female lays and their success. By combining population genetics research with this tagging and monitoring over many years, they found that St. Croix is part of the Northern Caribbean population of leatherbacks (including Puerto Rico and St. Kitts). This information helps lay the groundwork for important discoveries to come.

While scientists have uncovered some details about nesting females, they still lack answers about how long it takes leatherbacks to mature. This is a critical stage in a turtle’s life history and plays a role in understanding how species respond to and recover from disturbance or decline. For the leatherback—the only sea turtle that lacks a hard shell—scientists have a wide range of estimates, but no empirical evidence or direct observations, for how long it may take them to reach adulthood.

Searching for a Match to Uncover an Answer 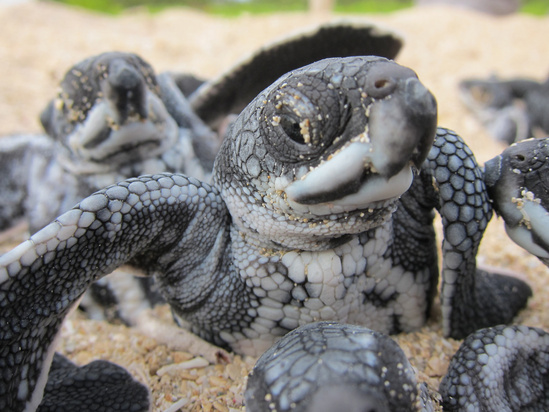 Leatherback hatchlings rest at the surface of the sand just before fully emerging.

The genetic tagging on St. Croix has evolved over time, gleaning information about the mysterious male sea turtle. We know less about males because, unlike their female counterparts, they spend their entire lives in the ocean after hatching. “We’ve taken the genetic tagging concept further while we wait for our perfect match to appear,” says Stewart. “Because we know the female genetic fingerprints and the hatchling genetic fingerprints, we can determine the father’s genetic identity for every hatchling born on the refuge.” 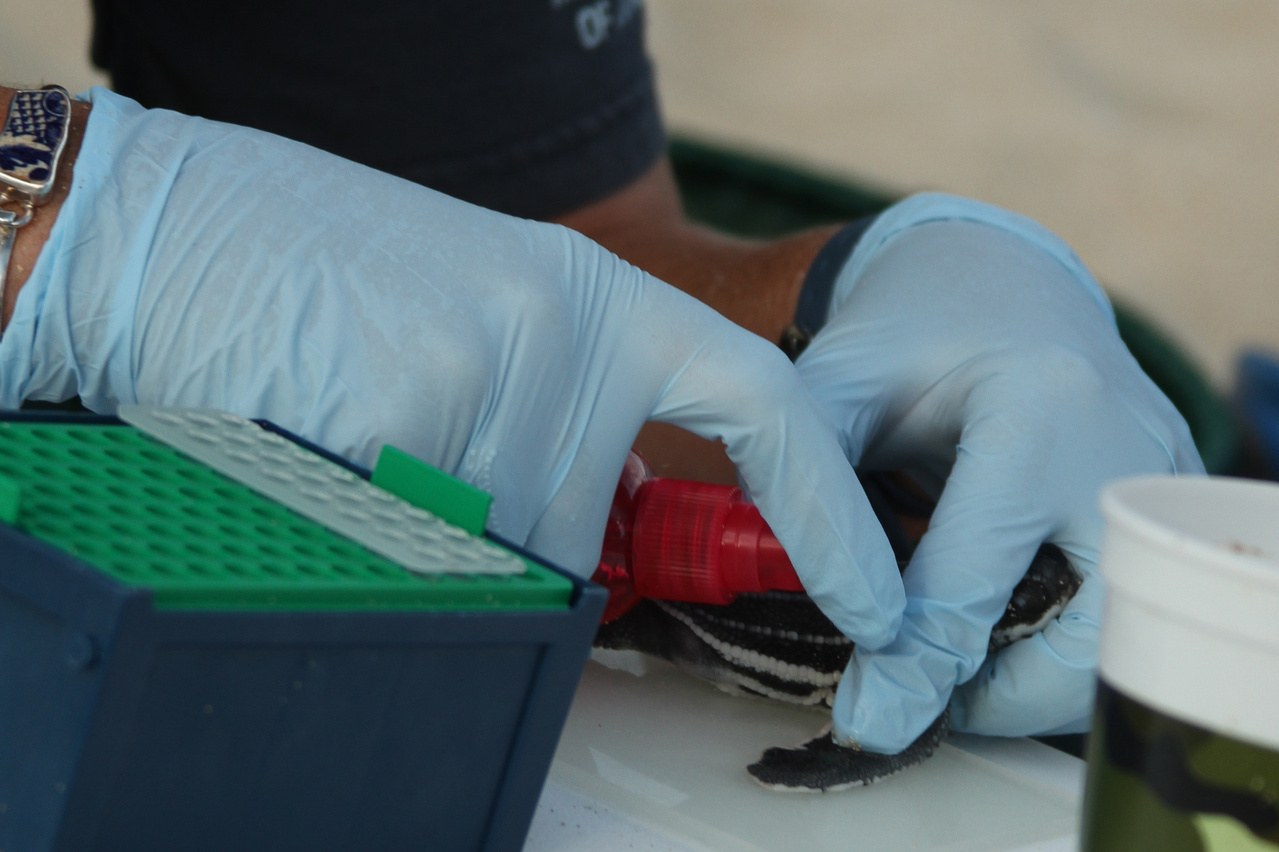 Peter Dutton puts a hatchling skin sample in a storage well for archiving.

Each year, scientists can assess a known number of females and their hatchlings, and then determine how many different males fathered those hatchlings. Stewart and Dutton found that there is usually one father for each clutch, sometimes there are two fathers, and occasionally there are three.

Looking at the DNA, they can assign each hatchling to a particular father. They can also identify the number of males that are successfully breeding and producing hatchlings, and can follow them over time to see how frequently they breed. 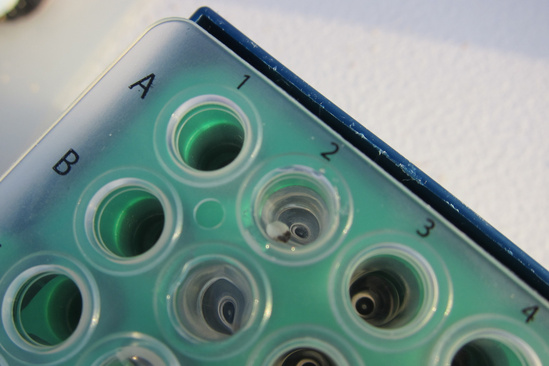 Tiny skin samples (black and white disk) taken from each hatchling stored in a salt solution. These will be used to genotype the hatchlings in each nest. 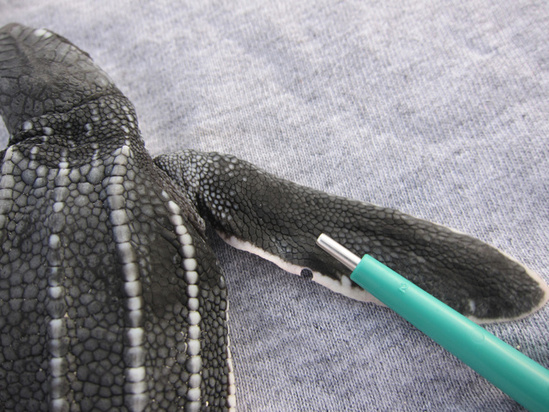 A hatchling showing the size and location of the skin biopsy on the front flipper.

With beaches warming over the last 30 years, it is key that we know the proportion of male sea turtles. Stewart and Dutton found that, remarkably, there was a 1:1 ratio of males to females in the breeding population, despite evidence of hatchling sex ratios producing more females.

“If indeed it takes decades for leatherbacks to reach sexual maturity, then we might not see the recent effects of climate change (beach warming) reflected in the population until today’s young female turtles reach maturity and begin breeding,” says Dutton. “Once we crack the code on maturity age, we may find that the shift to fewer males will happen sooner than expected.”

All of this information enriches our knowledge of sea turtle biology and improves our ability to understand how sea turtle populations are doing over time.

Along with being close to solving the mystery of the age of maturity, scientists led by Dutton have developed an entirely new set of markers for genetic fingerprinting. They are called single nucleotide polymorphisms and help them more easily identify the mothers and other relatives of new nesting turtles.

This ongoing collaborative work has been done in cooperation with many partners including NOAA Southwest Fisheries Science Center, The Ocean Foundation, U.S. Fish and Wildlife Service, and the Virgin Islands Department of Planning and Natural Resources.

The project provides essential data for population modeling and calculating recovery rates—critical pieces of missing information for the leatherback turtle. Luckily, our sea turtle detectives are on the case.

Last updated by Office of Communications on June 04, 2020