Seafloor Mapping and Coral Reef Assessment in the Mariana Archipelago

The NOAA Ship Rainier departs Honolulu on a mission to measure water depths and gather information on corals, fish, and changing ocean conditions. 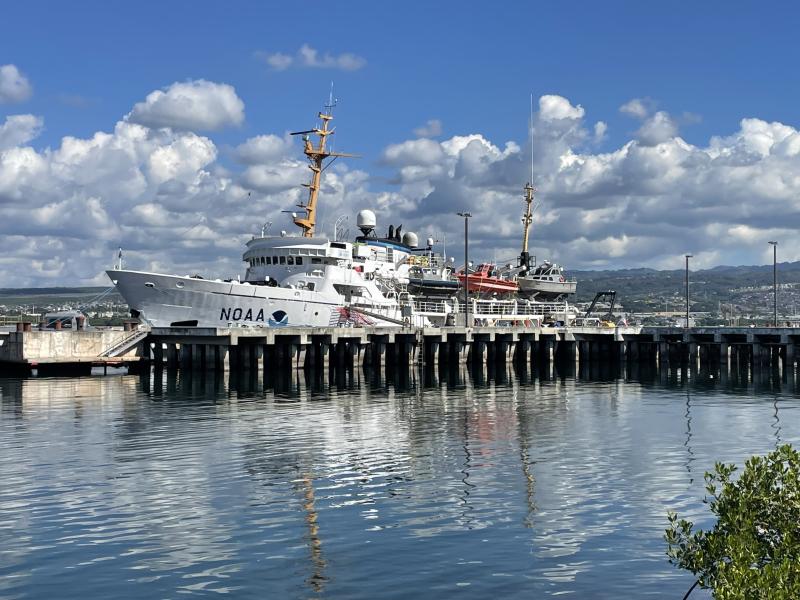 The NOAA Ship Rainier, alongside the pier in Honolulu, will carry scientists to the Mariana Archipelago this spring and summer. Credit: NOAA Fisheries.

Scientists and managers depend on research surveys to monitor coral reef ecosystems across the Mariana Archipelago. Multiple threats including climate change, disease, and land-based sources of pollution impact coral reefs around the globe, including the Marianas.

During expeditions this spring and summer, scientific divers from NOAA will estimate the number of reef fish and measure corals around the islands. They will also collect thousands of photographs to create 3D images of the reefs. The abundance and distribution of reef fish and coral reef organisms show us the conditions and integrity of our coral reef ecosystems. Over time, we can see how they have changed—an important part of conserving reefs in the region.

In addition to collecting information about the coral reefs, the team aboard the Rainier will also collect high resolution bathymetric data to update nautical charting products, improve maritime safety, and characterize seabed habitat. These data will be collected in areas of the Marianas Archipelago that, in some cases, have not been surveyed in over 80 years—if at all.

The Rainier will survey the following islands of the Mariana Archipelago:

The ship will deploy small boats along the forereefs around each island.

Combining seafloor images to create 3D models of large areas of reef tract is a process called "structure-from-motion" photogrammetry. During this mission, NOAA scientists will conduct structure-from-motion surveys across the archipelago to measure the density, surface area, die-off, and health of corals. Monitoring the same locations over time will provide valuable information on the resilience of these coral reefs to local and global threats.

Scientists aboard the Rainier will measure water temperature, salinity, carbonate chemistry, and other physical characteristics of the coral reef environment. Researchers will measure coral growth and bioerosion monitoring units to measure coral reduction. Together, these instruments allow researchers to assess the potential early effects of ocean acidification on the corals.

Scientists will observe the number and size of reef fish among the corals, and will also measure the coral size and health. These ecosystems are packed full of a variety of plants and animals.They provide coastal protection, food, and livelihoods to millions of people worldwide, but threats to coral reefs and marine ecosystems are growing. Researchers are leaning more heavily on combining digital imaging, growth measurement tools, and fish observations to enhance our monitoring capabilities.

NOAA’s National Coral Reef Monitoring Program provides coordination, funding, and manpower to investigate coral reef resources across the U.S. Pacific Islands, including the Mariana Islands. This work complements long-term coral reef monitoring efforts of local agencies. You can follow our progress on our story map, which will have photographs from our mission as well as a map of where we will be diving and collecting information.

The Rainier will use an advanced multibeam sonar system to measure water depths over a large area. The result is a detailed “picture” of the seafloor. Cartographers will use it to make nautical charts and scientists will use it to study ocean physics and marine ecosystems. The Rainier also carries two 28-foot survey boats, each with their own multibeam sonar. These small boats can access areas that would be too shallow or dangerous for the 231-foot-long ship. The process of mapping the seafloor is known collectively as “hydrography” and the Rainier is crewed by experts in the field.

In the Mariana Islands, Rainier data will be used to chart areas that, in some cases, have not been surveyed in more than 80 years, if ever. This is crucial for safe navigation and scientific study of our ocean. It also supports the global initiative to map the entire ocean by 2030, known as “Seabed 2030.” You can follow the mapping progress on this story map.