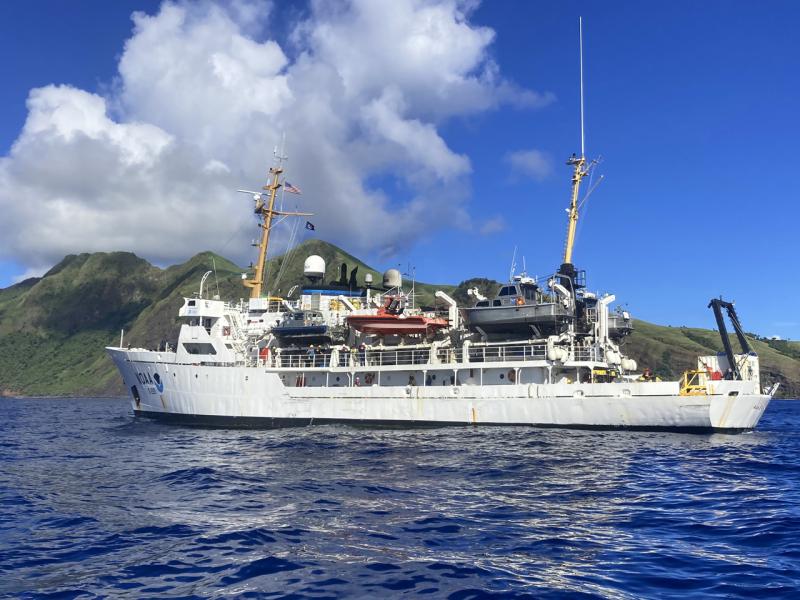 In March, the Rainier Integrates Charting, Hydrography, and Reef Demographics mission aboard the NOAA Ship began. Scientists spent the last 5 months collecting images of and mapping the seafloor, assessing coral reef health, and gathering data on the life history of deepwater snappers.

The Rainier was able to survey or sample at the following islands of the Mariana Archipelago:

Rainier’s team surveyed 7,981 linear nautical miles, and 4,746 square nautical miles. Operations took place around the clock even while other projects were happening on the ship. The survey team gathered high-quality multibeam echo sounder coverage and created backscatter mosaics of the islands.

We have updated more than 1,050 charted features. We have disproven several erroneous soundings on the charts and found new ones, which will aid in the safe navigation of vessels in and around the Mariana Islands.

The fish team conducted more than 200 surveys in both the populated southern and remote northern islands of the Marianas Archipelago. Divers encountered abundant and curious fish, unfazed by seeing the divers in areas where fishing is not allowed. Although many of the northern islands are very small, divers were delighted to find the underwater reefs often teeming with marine life. Divers were awed by large schools of predatory fish like sharks and jacks present across many of the northern islands. There were especially striking numbers at reefs around the northernmost island visited, Farallon de Pajaros, or Uracas.

Not to be outdone, the southern islands provided their own highlights. In fact, divers saw humphead wrasse (Cheilinus undulatus) at several reefs around Guam and Saipan. They are one of the most charismatic and valued fish in the region due to its massive body and distinct hump on its head. These fish also play an important role in the ecosystem by eating crown-of-thorns sea stars, which can be harmful to coral reefs in large numbers. Divers were also enchanted by some of the smaller fish, such as the variety of anemonefish (like Nemo!) nestled in their protective homes.

The ocean and climate change team savored the experience of working around the underwater carbon dioxide vents at Maug. These cracks in the seafloor are areas where carbon dioxide gas is escaping—the divers actually saw bubbles of gas rising out of the seafloor! The carbon dioxide gas released by these vents causes a more acidic environment around the vents, making this a unique site to study. These conditions provide a glimpse of what many coral reefs might look like in the future as oceans become more acidic. Scientists measured acidity, seawater conditions, and took coral samples near the vents. They will compare them to other samples taken farther away from the vents in less acidic settings.

Another highlight of the mission was testing a new survey method that scientists will start using in 2024. This method assesses whether reefs are growing or shrinking by estimating rates of reef growth (creation of reef carbonate material) and erosion (removal of reef material). Scientists are always striving to improve data collection methods.

The benthic team was busy measuring coral colonies to assess their overall health. Like many reefs around the world, this region was unable to escape the effects of the 2014–2017 Mass Global Bleaching Event. Bleaching occurs when higher than normal ocean temperatures stress or kill corals. Divers saw the effects of this event in sensitive corals such as Pocillopora. They also observed a crown-of-thorns sea star (Acanthaster planci) outbreak at Pagan. Crown-of-thorns sea stars are a natural coral predator; in large numbers they can cause significant portions of reefs to die. Luckily, the divers did not notice many of these harmful predators on other islands.

While bleaching events have harmed coral reefs, there is some good news: across the archipelago, divers saw healthy reefs with abundant coral. In some areas, corals were almost 16 feet wide—that’s larger than two living room sofas side by side! Divers were also excited to see lots of young corals, which is a good sign for recovery. A reef is more likely to recover from a stressful event, like bleaching, if young corals can settle and grow into adulthood. Based on what the divers saw, many islands seem to have a healthy number of young corals. We wonder if they will survive into adulthood. To help answer this question, divers amassed images of coral reefs that can be stitched together to form a model (Structure-from-Motion photogrammetry). From this model scientists can measure exactly how much individual coral colonies grow. This also allows scientists to determine how reefs are faring across the archipelago and identify potential conservation strategies.

NOAA scientists, along with a Saipan commercial fisherman, sampled federally managed bottomfish. The scientists collected otoliths (ear bones), gonads, and fin clips from nine deepwater snapper species at Rota, Tinian, Saipan, Marpi Reef, Anatahan, Sarigan, and Zealandia. The otoliths allow the scientists to estimate an individual fish’s age—similar to counting rings on a tree. When enough fish are aged, scientists can estimate how fast that species grows and how long it lives. Some bottomfish live more than 50 years! Scientists use the gonad samples to estimate the size and age when fish start spawning, the time of the year they spawn, how many eggs are released, and how often they spawn. Stock assessments use all of this information to report on the health and abundance of a species population for sustainable fisheries management. Sampling fish outside the primary fishing grounds furthers the scientists’ understanding of how species vary along the Mariana Archipelago and how the populations will respond to climate change.

An advantage of working from the Rainier was the access to the incredible high resolution bathymetric maps. Scientists worked with the Rainier Survey Team to identify potential deepwater snapper habitats using these maps. This resulted in much more efficient operations!

Now, scientists are crunching the numbers to determine how the reefs are doing and what changes have occurred since the last time they did these surveys—2017. Next the team will produce summary reports for managers and interested members of the public. In the meantime, check out their Story Map to see more photos and highlights from their trip!