Changes began in 2010, whales present along much of East Coast year-round 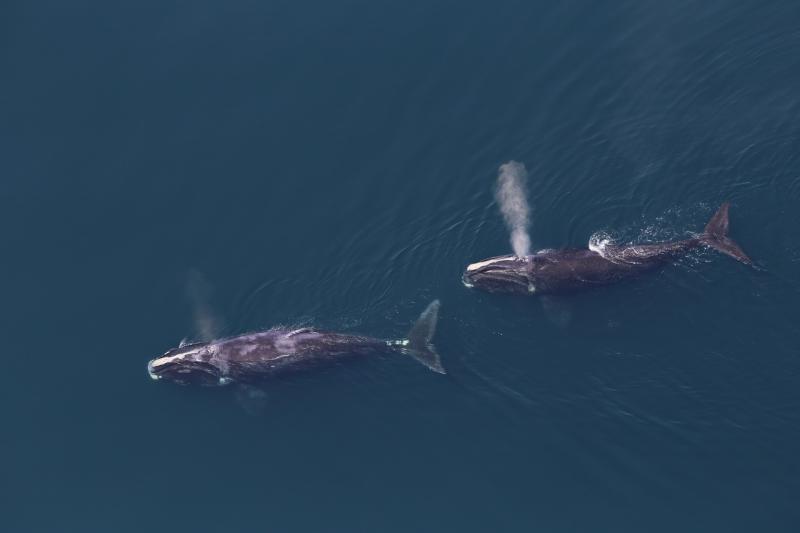 A new study confirms what marine mammal researchers have suspected for a while: right whales use nearly the entire eastern seaboard during the winter, and they move around a lot more than was previously thought. How long they spend in some areas of their range has also changed in recent years.

The findings, published in Nature Scientific Reports, were based on passive acoustic monitoring. Using bottom-mounted listening devices deployed along the coast, researchers can record whale calls 24/7 and obtain new insights into how whales use all habitats.

“This study demonstrates that passive acoustic monitoring is a useful tool in understanding and tracking shifts in the movements of large whales over long periods of time,” said Genevieve Davis, an acoustician at the Northeast Fisheries Science Center’s Woods Hole Laboratory in Massachusetts and lead author of the study. “This kind of information is impossible to access in any other way because of weather and day light constraints for visual surveys.”

Analysis of data collected by passive acoustic monitoring between 2004 and 2014 by 19 organizations throughout the western North Atlantic Ocean revealed North Atlantic right whales have increased time spent in the Mid-Atlantic region since 2010 and decreased their presence in the northern Gulf of Maine. They were also less likely to be found in the waters off Cape Hatteras, North Carolina in summer and fall, and are widely distributed across most regions throughout the winter months.

“Right whales are the least abundant but most intensively studied species, yet we don’t know a lot about them in terms of their movements and migration patterns," Davis said. “They seem to be visiting the Bay of Fundy less frequently than they used to, now appearing along the East Coast year-round where they were once only seen for a few weeks passing through, and more of them are gathering as a population in Cape Cod Bay in recent years.”

More than 35,600 days of data from 324 listening devices deployed from Florida to Canada were processed for the study using an automated classification and detection system. The data confirmed the nearly year-round presence of North Atlantic right whales along the entire East Coast, particularly north of Cape Hatteras. In the past researchers assumed the majority of the population migrated between calving grounds off northern Florida and Georgia in winter months and northern feeding grounds off New England and Canada in summer months, but the data reveal that not all of the population has an annual migration.

North Atlantic right whales were detected from Jacksonville, Florida to Nova Scotia from late October through early April. The only exception was on the Scotian Shelf, where no whales were detected from December through February. Fewer detections were recorded during the summer months in southern areas, indicating the known movement of breeding individuals towards northern feeding grounds.

Right whales were also detected near Iceland and Greenland from July through October, and whales have been sighted more frequently further north as far as the Gulf of St. Lawrence.  Individual right whales have also made trips to European waters, including a 131-day round trip from U.S. waters to an old whaling ground off northern Norway.

Marine mammal researchers have been observing changes in the right whale population for some time. Evidence of a potential right whale mating ground in the Gulf of Maine was published by NEFSC scientists in 2013.  "We are still seeing right whales in the central Gulf of Maine, just not in the same numbers. They are still out there, but where they all are is the big question,” lead study author and NEFSC biologist Tim Cole said at the time.

Data from a number of different research projects and goals were combined for this study, one of the first comprehensive, long-term passive acoustic studies to investigate an entire habitat range for a marine mammal at this time and space scale.  Five types of bottom-mounted passive acoustic recorders were deployed during the study period, each able to listen to calls from multiple whale species at one time.

Right whale calls include the low-frequency modulated upsweep known as the “upcall”.  It is a contact call used throughout the North Atlantic right whale’s range, produced by all ages and both sex classes, and considered the most reliable call to use for determining right whale presence.

“We now have baseline information on right whale distributions across their current range,” Davis said of the recent study. “It isn’t clear what is causing the changes in right whale occupancy since 2010.  It could be a response to human causes or to the changing environment, or both. Passive acoustic monitoring is a powerful, cost-effective, long-term monitoring tool that can give a better understanding of trends and reveal range expansion, decline, or distribution shifts in populations, as well as changes from year to year. This information can be used to direct science and management to areas of interest. In an ocean where conditions are changing rapidly, adaptive management is needed to identify and protect areas that are crucial for this species.”