We asked our scientists to share their spooky, weird, and scary moments that happened while they were conducting research. From disembodied whispers to shadows and reflections, their stories do not disappoint! Enjoy reading their stories—if you dare! 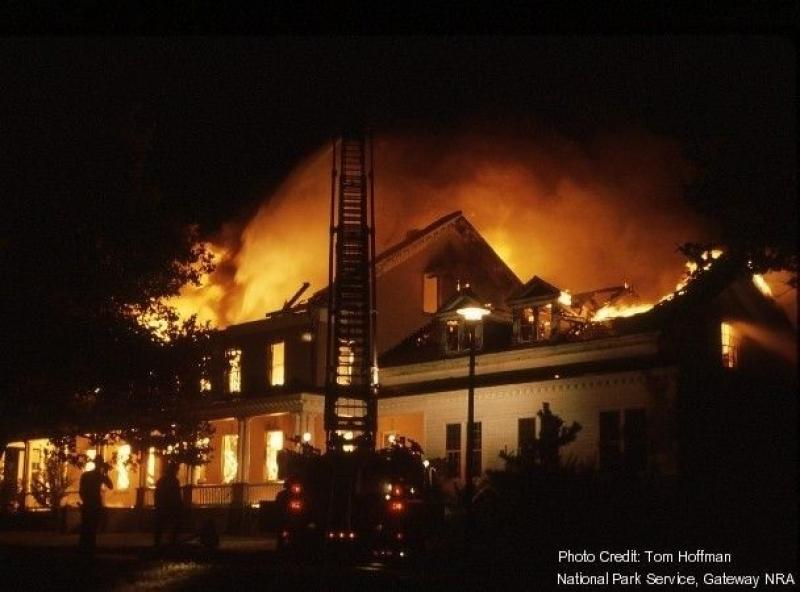 Beth Phelan is a Research Fishery Biologist and Chief of the Ecosystems & Aquaculture Division's Fisheries Ecology Branch, and is based out of our Sandy Hook Lab

In 1985, the old army hospital built in the late 1890s was part of our Sandy Hook lab. During that time we were conducting bluefish research in that building and staff members working the night shift would record fish swim times each hour to ground truth video recordings documenting swimming behavior. I had only been working at the lab a couple of months when I was asked to participate in this research. My office was on the first floor and the door to enter the research aquarium was in the basement. Connecting these two areas was a set of stairs to the basement, but to get there meant passing a large staircase to the second floor. I started hearing what I thought was whispered voices coming from upstairs – not every time I passed the large staircase, and not always clearly. I ignored it, thinking that I maybe imagined it. By midnight, I had decided to just stay in the basement aquarium room and sleep on the old hospital couch rather than walk through the building and past the large staircase. Since I was new and wanted to keep my job, I continued sleeping in the basement whenever I had to work the night shift, about once every six weeks. That was until the lab building burned down in September of 1985. Scary thing was, an arsonist had lit the fire on the night I was supposed to work. I fortunately had switched my shift to another night. After the fire, when a coworker and I were scavenging equipment from the lab ruins, I remember thinking to myself, “Finally, the building will be quiet.”

Vincent Guida is a Research Fishery Biologist in the Ecosystems & Aquaculture Division’s Habitat Ecology Branch, and is based at the Sandy Hook Lab in New Jersey.

Late one warm summer night at the Duke University Marine Lab, I and a few other graduate students were working late on a class research project for a graduate course in Invertebrate Physiology. We were recording the circadian respiratory rhythms of ghost crabs (Ocypode quadrata) in a pitch-black, windowless, second-floor lab. While talking to each other in the pitch-black, we saw tiny flashes of blue-white light. The strange thing was, we could only see them when people were talking. We sat there in the dark, racking our brains to understand what these odd flashes of light could be. Did we anger the ghosts of previous researchers, or the spirits of the ghost crabs? Nope, but science had the answer! It turns out it was the Pep-O-Mint Lifesavers we were chewing. Lifesavers contain high-energy polyphosphate sugars that break down upon impact, releasing energy as photons — light — at visible wavelengths. The flashes are faint and only visible in a pitch-black space after your eyes have adapted to the dark. We learned about this phenomena later, but until then it really had us going!

When you work in an aquarium, you get used to a multitude of different noises – hissing of air supply lines, rhythmic cycling of the seawater pumping systems, splashing of aquarium specimens, and sometimes barely audible conversations between aquarium visitors. We have a lot of people walking and talking throughout the aquarium for most of the day, but then there are other times when you’re working alone, doors closed to the public and coworkers are gone. It was usually during these times that I would see what I at first thought was just a visitor that hadn't signed in at the front desk, a scientist wandering about on a lunch break, or a coworker who came back into the building because they forgot something. Then I’d remember – it couldn’t be any of those things – I was alone. My visitor would allow me to see him in only two locations, the behind the scenes area on the second floor and in the basement. In the public area of the back-up gallery, I'd see the shadow of an older man, large in stature, generally off in the distance, passing through my peripheral vision. I can't always be certain that it isn't someone passing through, although I'm nearly always certain I am alone. In the basement, I’ll always see the reflection of a bearded man, peering into the glass of the tanks I was checking, off my shoulder as if standing beside or behind me. In the beginning I’d naturally turn around expecting to see someone, but no one was ever there. I’ve now stop turning around. I simply assume it’s a quiet observer, a curious mind, or perhaps the man who is still vested in the work we do for the public, in a location that held a dear place in his heart and whisper, “Mr. Baird, is that you?”

Attack of the Parasitic Isopods

Eric Robillard is the Acting Chief of the Ecosystems Surveys Branch and a Supervisory Research Fishery Biologist for the Fishery Biology Program, and is based out of our Woods Hole Lab.

It was a sunny afternoon in Tampa Bay when it happened. We began deploying a 300ft gill net from our small research boat and about half way through the deployment, it started tugging weirdly. We stopped and began pulling the net back onto the boat. It became quickly apparent that we had hit a huge school of menhaden (Brevoortia tyrannus). There were hundreds upon hundreds of them. Because the gill net mesh was too small, it acted like a spaghetti strainer, scooping them up rather than entangling them. As we pulled the net in, the menhaden just started falling into the boat. We didn’t pay attention to the fish flopping at our feet because we needed to get the net out of the water as fast as we could to stop more fish from being captured. That’s when I felt it — something was crawling up my leg! I looked down and to my horror I saw hundreds of parasitic isopods spewing out of the mouths of the menhaden, crawling up and attaching to my legs. I started screaming and jumping around, causing the others to do the same. We ended up climbing on the boat's center console chairs, waiting for these things to die. I still can feel that raspy clenching sensation on my legs. Yuck!

What Lurks in the Shadows

Laurel Smith is a Fisheries Biologist in our Ecosystems Dynamics & Assessment Branch (EDAB), and is based out of our Woods Hole Lab.

While working in the Cascade Mountains of Oregon, two coworkers and I were heading back from a rare plant study site when we happened upon a small herd of elk. One of my coworkers mentioned that we should probably get going because mountain lions are drawn to herds of elk. For the next mile or so as we walked along the small dirt logging road to our work truck, we kept hearing what sounded like something large rustling in the brush alongside us. We’d look, but couldn't see anything. As it kept pace with us, we stayed close together and kept a brisk walking pace while talking loudly to make our presence known. We started talking about the recent mountain lion sightings in the area – of joggers being stalked and small dogs being eaten. I then shared the eerie story I had recently heard on the news. There was a family having a fun outing in a nearby park. During their walk, the man had stopped to take a picture of his wife and their little baby tucked in a stroller. It wasn’t until they later developed the film that they saw the hidden horror. Peering through the bush right behind the stroller was the face of a mountain lion. Talking about all these mountain lion stories made us pretty jittery – our hearts were pounding! We all knew we shouldn't run because that makes mountain lions want to chase, and we would definitely lose that race. In that moment though, it was really, really hard not to run as fast as we could down that small logging road towards our work truck!

Phantom of the Deep

Jerry Prezioso is an Oceanographer  in the Ecosystems & Aquaculture Division’s Oceans & Climate Branch, and is based out of the Narragansett Lab in Rhode Island.

About 20 years ago I was night snorkeling in about eight feet of water with a colleague near Point Judith, Rhode Island, trying to take some photos of squid predation on sand lance. As I knelt down on the sandy bottom to line up my shot, I placed one of my hands on the sand to steady myself. I spotted a school of squid feeding and as I was readying my camera system I suddenly felt a yank on dive suit sleeve. Assuming it was my dive buddy, I turned around to see what he wanted. I saw nothing – he wasn't there! Eyes darting around, I spotted his dive light a little distance away. My mind raced trying to figure out what happened. Then, another hard yank on my dive suit. I quickly looked down at my wrist not knowing what to expect. And that’s when I saw it – my phantom dive buddy – a large blue crab tugging away at my dive suit sleeve.