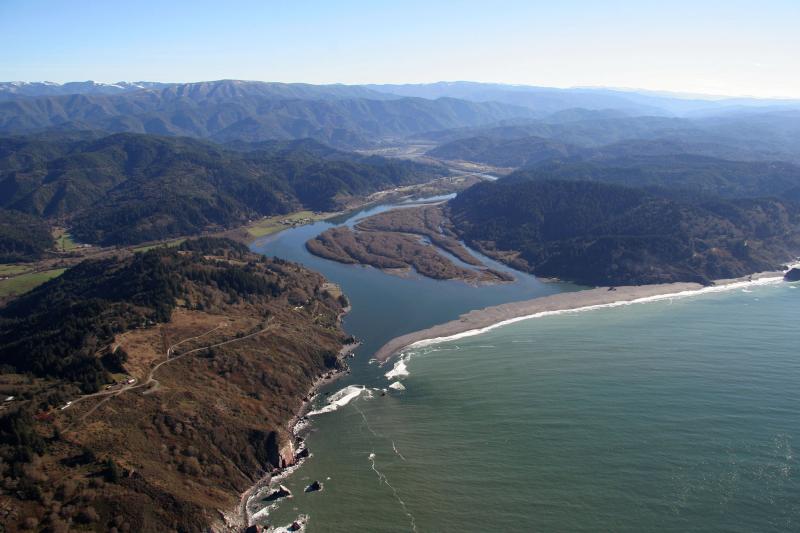 The Klamath River reaches the ocean in Northern California. It was once the third-largest salmon river on the West Coast. Photo by Thomas Dunklin.

The annual migration of Chinook salmon up West Coast rivers from the ocean has enriched ecosystems, inspired cultures, and shaped landscapes. Yet the timing of their migration is controlled by one small section of their genome, according to research published this week in Science.

This is the first time scientists have linked a single gene region to such an influential difference in a vertebrate species. For salmon, it determines whether they return upriver from the ocean in spring or fall. This has crucial implications for other species that rely on them for food. First author Neil Thompson of the University of California Santa Cruz and NOAA Fisheries’ Southwest Fisheries Science Center said that this small genetic difference can have a major effect on a complex pattern of migration and reproduction.

Fish migrating upriver in spring may access habitat such as higher elevation tributaries. These habitats become less accessible to Chinook salmon migrating later in the year when stream flows decline. The result is that fall-run Chinook salmon remain lower in the watershed without continuing up into the tributaries.

However, the construction of dams in the West blocked spring-run Chinook salmon from much of their original spawning habitat. This contributed to the listing of several spring-migrating fish under the Endangered Species Act. Fall-run Chinook salmon on the West Coast are generally more abundant.

The scientists identified the gene region influencing migration with whole-genome sequencing. Then, they scientists examined the genetic pattern in more than 500 Chinook salmon caught by the Yurok Tribe in the Klamath River estuary. They analyzed the effects of variation in this genetic region on migration timing and other physiological traits.

They found that the genetic variation accounted for almost all of the difference in timing between spring- and fall-migrating Chinook salmon. Other traits, such as the timing of reproductive maturation, long considered to be key differences between these runs, were not genetically determined. Rather, the differences appear to result from whether the fish spend their final summer in either freshwater, as do the spring run, or the coastal ocean ecosystem, like the fall run.

Thus, what was thought to be a very complex difference turns out to be a simple consequence of a genetically determined shift in migration timing.

Chinook salmon migration timing “is a simple consequence of what version of this gene region they inherit from their parents,” said the study’s senior author John Carlos Garza, leader of the Molecular Ecology and Genetic Analysis Program at the Science Center and an Adjunct Professor at the University.

Complex traits are usually thought to result from the interaction of many genetic and environmental factors, he said. For example, genetic factors and other influences, such as diet and exercise, contribute to hypertension in humans. The difference in Chinook salmon migration timing is more like the difference in eye color—determined by a simple genetic mechanism alone.

Detailed genetic analysis also showed a long history of interbreeding between spring- and fall-migrating fish in the Klamath River system and likely others on the West Coast. Coupled with the simple genetic difference between spring- and fall- migrating fish, this means that full siblings from the same Chinook salmon nest, or redd, may turn into either spring- or fall-migrating Chinook salmon. It depends upon which two variants of the gene they inherit from their parents.

The scientists further found that the same ancient genetic changes underlie the early migration of spring-run salmon throughout their study area.

This indicates both that the critical genetic variation for early migration still exists widely in the species, and that these iconic spring-run fish can readily reemerge from their late migrating fall-run brethren in places where they have been lost, like the Klamath, with the addition of fish carrying the early migrating version of this single genetic region.

That means that spring-migrating Chinook salmon will be present to return to their historic habitat following removal of dams and restoration of their habitat, as is anticipated on the Klamath River. Many questions remain, but this discovery provides a strong framework for understanding likely outcomes of conservation and recovery actions.

“We just need to give them an opportunity to do what they’ve done forever,” Thompson said.