Research Conducted On, Over, and Under the Water 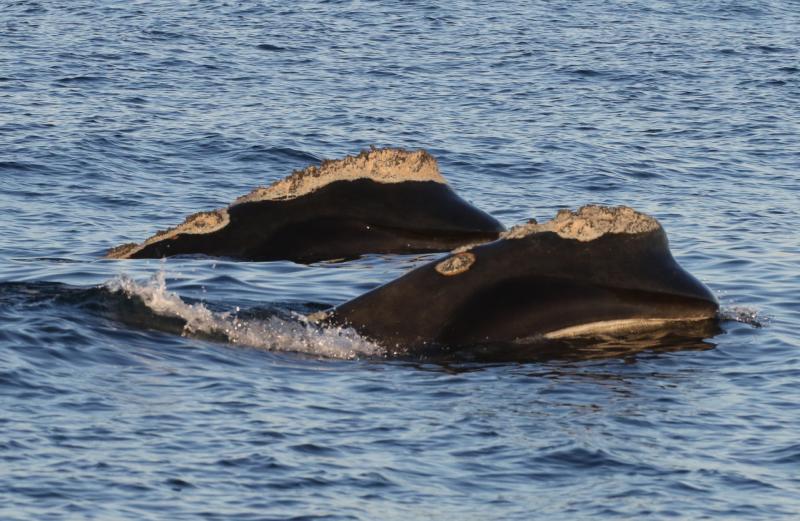 Right whales are congregating in Cape Cod Bay, much like they have in years past, but in greater numbers and earlier in the season. Researchers at NOAA’s Northeast Fisheries Science Center (NEFSC) are on and over the water, using boats and aircraft to track the animals during their time in the region. They also listen for the presence of whales using underwater recording units in place throughout the year.

Much of the work is conducted by marine mammal researchers in the Center’s Protected Species Branch at the Woods Hole Laboratory in Woods Hole, Mass. With right whales already feeding in Cape Cod Bay, six day trips have been made in the past month or so, despite the relentless winter weather. Researchers work from the deck of a 24-foot boat, photographing individual whales for identification and health assessments. Researchers also aim to take small tissue samples from a long list of individual whales that have never been sampled for genetic studies.

“Historically we see the largest number of right whales in April, but this year we’ve already seen 50-60 in March,” said Lisa Conger, a marine mammal researcher who collects tissue samples from whales, especially moms and calves so that calf survival rates can be monitored.

“We’ve extended our field season because the whales have shifted their habitat use, arriving in Cape Cod Bay in substantial numbers and earlier,” Conger said. “They have largely abandoned the Bay of Fundy feeding grounds in the late summer, now showing up in larger numbers in the Gulf of St. Lawrence by late June/early July.”

Conger spent three weeks in Georgia during January hoping to see and biopsy new calves while they were still with their moms, but no calves and few whales have been seen there this year. With more of the whales now in local waters, she plans to get out on the bay every day she can between now and early May, weather permitting, to get detailed photographs. Photographs taken from a boat in close proximity to the whale can provide details unable to be captured by images taken on aerial surveys.

“Weather hasn’t been on our side much, so we are hopeful the coming weeks will bring calmer seas and mild winds,” Conger said. “Most of the animals are known cataloged whales, but it is important that we identify and assess as many as we can each year, and gather genetic information from those we haven’t sampled to help us monitor the population.”

Five people usually make the small boat trip, one to drive the boat, another to take photographs, a third to record data, a fourth to keep tabs on all individuals seen that day, and the fifth to look through data and images to determine which whales need to be biopsied using a retrievable dart. Starting March 17, NEFSC staff were joined on the boat trips by researchers from the New England Aquarium.

From the air, the NEFSC’s aerial survey team started flying March 20. The NOAA Twin Otter arrived March 16 at Joint Base Cape Cod, where the aircraft will be based the next few months.  Waters west of the Exclusive Economic Zone 200 miles offshore will be surveyed from Maine to New York. The focus will be on areas were whales have been sighted historically and where NEFSC receives reports of aggregations. Sightings from aerial surveys can also help direct vessel operations like those Conger is conducting.

Once the right whale aggregations have departed U.S. waters, most likely the end of May or early June, the aircraft and members of the NEFSC aerial team will head north to Canada to work with Canadian colleagues on right whale surveys in the Gulf of St. Lawrence.

Under the water, a network of passive acoustic recording units can be used to monitor all sounds, including those from right whales. Currently, a network of Marine Autonomous Recording Units (MARUs) and High-frequency Acoustic Recording Packages (HARPs) are deployed along the migratory corridor of right whales, across the shelf, from Georges Bank to Georgia.

Two recorders, which are part of the Noise Recording Station project, are currently deployed in the Stellwagen Bank National Marine Sanctuary and at the start of the New England Seamount chain.  These can also be used to hear right whales, but not until the instruments are recovered after a longer, two-year deployment.

In addition, and in collaboration with Mark Baumgartner at WHOI, a real-time buoy is in place off of the New York Bight to record baleen whales in the vicinity. This works in similar fashion as the shipping lane autobuoys, which can inform us within 24 hours of right whale acoustic presence.

Recordings from all of these devices can indicate the presence of right whales and how their movements are changing over time.