The survival of juvenile salmon in Puget Sound has declined by up to 90 percent. NOAA scientist Megan Moore tags steelhead to learn more about their survival and help recover this threatened species. 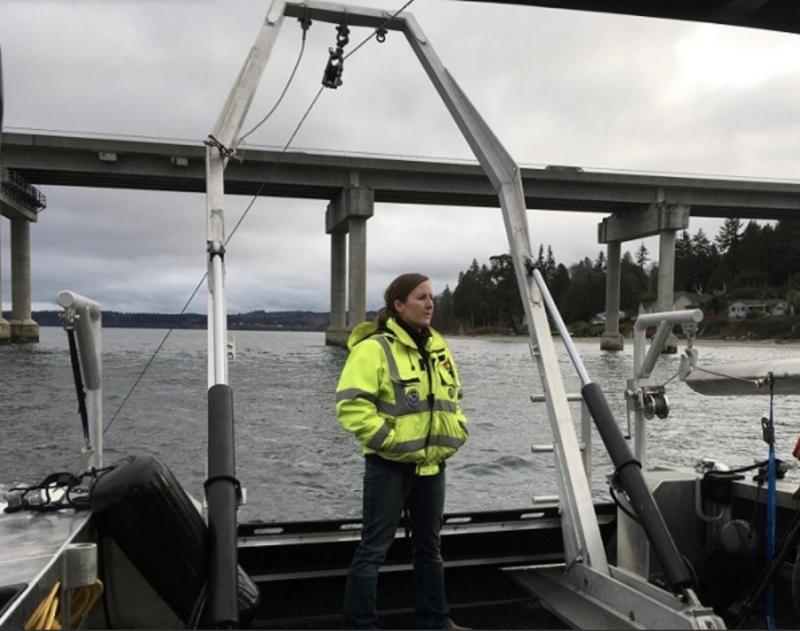 Survive the Sound is an online game developed in collaboration with Long Live the Kings and other partners, using real fish data collected by NOAA scientists who study the migration patterns and survival of threatened steelhead in Puget Sound.

The real fish tracking data is transformed to a friendly competition where gamers can pick a fish and compete for survival as the fish migrate through obstacles including pollution, predators, and physical structures such as bridges. After the 5-day migration (May 6-10), the individual, classroom, or team with the most surviving fish wins bragging rights.

The fish in the annual “Survive the Sound” online game are based on data from real fish tagged by Northwest Fisheries Science Center scientist Megan Moore in the previous spring season.

Since 2006, the center has been using acoustic telemetry to track juvenile Puget Sound steelhead smolts from the beginning of their migration in freshwater to the Pacific Ocean. Using miniature transmitters and a network of hydrophones throughout Puget Sound, scientists can estimate survival probabilities, measure travel rates, identify areas of high mortality, and even identify and gather information about the predators that are eating migrating steelhead smolts.

Why We Do this Work

Puget Sound steelhead are currently listed as threatened under the Endangered Species Act. Their abundance declined significantly in the 1990s, and populations haven’t rebounded despite fishing restrictions and habitat restoration efforts.

In 2006, there was little to no information available about the early marine ecology of the species. Scientists wondered whether this early marine life history stage may be limiting the ability of Puget Sound populations to recover. From this research, we now know that steelhead populations experience very low survival in Puget Sound waters. More recent studies have focused on identifying the mechanisms driving this low survival.

Our data show that early marine survival in Puget Sound is low enough to limit recovery of these threatened populations. Predation is the predominant cause of low survival. This information is extremely important to inform management actions that can counteract the drivers of high mortality and increase survival rates of steelhead in Puget Sound. If we can increase early marine survival, then theoretically more fish will successfully return to spawn and we can start to realize recovery for Puget Sound steelhead.

In recent years, center scientists have been surprised to see higher estimations of survival compared to earlier years in the study. For example, Nisqually steelhead survival increased from a 5–10 percent survival probability in 2006–2014 to more like 40 percent in 2016 and 2017. The high survival rates may be related to warm Puget Sound water temperatures, which hypothetically lead to increased anchovy abundance. Availability of anchovy may then buffer predation on steelhead and allow for more successful migration out of the marine mammal gauntlet that is Puget Sound.

Moore notes that another unexpected discovery during the course of the telemetry work in Hood Canal is the huge amount of mortality (30–50% percent) incurred at the Hood Canal Bridge. The structure "floats" 15 feet under the surface of the water spanning 90 percent of the outlet of Hood Canal. It blocks the migration of surface swimming fish like steelhead. The currents, water temperature, and salinity patterns altered by the concrete structure cause migration delays. This makes steelhead smolts more vulnerable to predation in that particular area of Puget Sound.

“I would love for people to begin to grasp how much steelhead struggle to survive as they complete just one phase of their life. Survival from deep in Puget Sound to the Pacific Ocean can be just 6 percent!” says Moore. “That low survival rate acting on low population sizes doesn't leave very many fish that still must complete two to three years in the ocean before returning to spawn.”

Moore also hopes that “Survive the Sound” participants dive deeper to learn more about the obstacles experienced by the migrating steelhead in the game.

“I hope that being part of that journey brings awareness of the connectivity of our Puget Sound ecosystem, which includes many aquatic animals as well as humans. As a participant or student really starts to think through the obstacles, I hope they realize that our human actions have huge impacts on the species we value and hope to recover,” she says.

Megan Moore and her colleagues have one more year of funding for the tagging work in the Nisqually, so their plan is to keep that data set going at least through 2020.

“It's been amazing and so useful to have enough years of data to start looking at interannual patterns of survival and the factors that drive those patterns,” Moore says.

She also hopes to get support to implement phase II of the Hood Canal Assessment, which would test solutions with the potential to increase the survival of steelhead and other salmonids past the Hood Canal Bridge.

Can you survive the Sound? Join our team or create your own, and compete online to see whose team has the most surviving fish over the 5-day migration from May 6-10, 2019.

Teachers can create a team with classrooms, download lessons, sign up for a teacher training, or live chat with a scientist.