Despite its impressive size, little is known about the basking shark’s habitat, behavior, and migratory patterns. 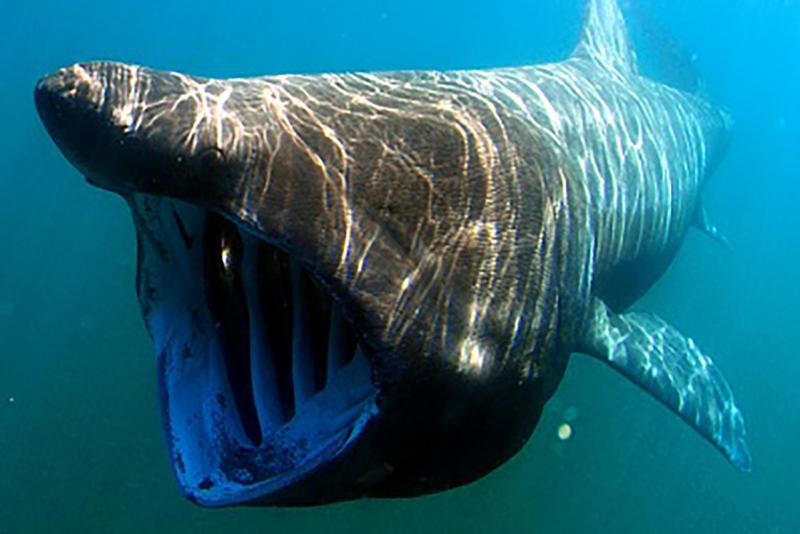 The basking shark, the largest shark in the waters off Southern California, is also the most elusive. NOAA Fisheries researchers are now seeking to unravel the mysteries of basking sharks by tagging them with satellite transmitters that will reveal their movements and behavior as they roam the waters around Channel Islands National Marine Sanctuary and beyond.

Often mistaken for great white sharks because of their similar dorsal fin, basking sharks are even bigger—but far less fearsome. The near school bus sized sharks swim through the current, filtering the water for dense clumps of copepods. These tiny crustaceans, about the size of a grain of rice, are their main prey.

Despite its impressive size, little is known about the basking shark’s habitat, behavior, and migratory patterns. NOAA researchers expect the satellite tags to provide important new details about the sharks that spend at least part of their lives in Channel Islands National Marine Sanctuary.

“These data will help fill gaps in our understanding of basking sharks’ movement, their overlap with fisheries, and how oceanography influences the species’ distribution,” said Heidi Dewar of NOAA Fisheries’ Southwest Fisheries Science Center and the project’s lead scientist. “All of this information is vital for the continued management and conservation of these poorly-understood sharks.”

Basking sharks were targeted in the mid-1900s by fisheries, an eradication program, and as a source of shark fins for Asian markets. They are seen seasonally throughout temperate regions of the North Atlantic and Pacific, but have long been a rare sight in Southern California waters.

Researchers gained some information from four tagged basking sharks, but have been unable to tag any sharks since 2011. That is, until this past April, when Ryan Freedman and his team from the Channel Islands National Marine Sanctuary deployed satellite tags on two basking sharks in one day. This recent tagging has renewed the joint effort between the Science Center and the Sanctuary, and researchers are planning to deploy up to four additional tags when the opportunity arises.

Scientists currently do not understand how changes in environmental conditions may impact basking sharks, or even where North Pacific sharks go when not along the U.S. West Coast. One of the earlier sharks tagged off California traveled as far as Hawaii. 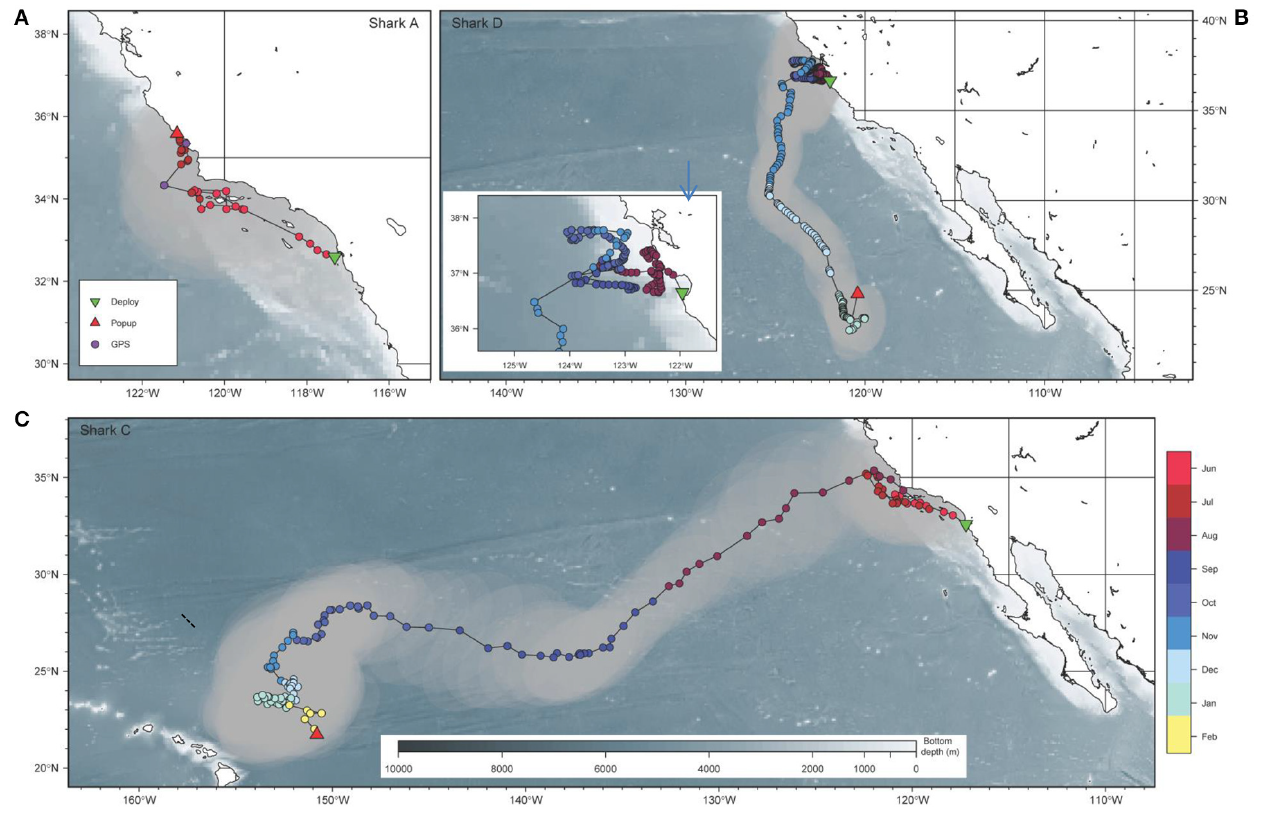 Geographic movements of three basking sharks tagged off California in 2010-2011. Movements of (A) shark A over 51 days, (B) shark D over 180 days, and (C) shark C over 240 days including tagging (green triangle) and tag pop-up (red triangle) location, GPS locations and light-based geolocation estimates. Gray shows error estimates around the light-based geolocation estimates. Inset shows an expansion of the movements of shark D off Central CA. The dashed line indicated to path of the acoustic survey. (Click image to enlarge).

The pop-up satellite tags attached to the sharks collect data on temperature, depth, and light. After 240 days (or sooner depending on conditions), they pop off the animal, float to the surface, and transmit their data to satellites. NOAA scientists can then recreate the shark’s geographic movements using the light data. The temperature and depth data provides insight into the sharks’ behavior and habitat use throughout the recording period. 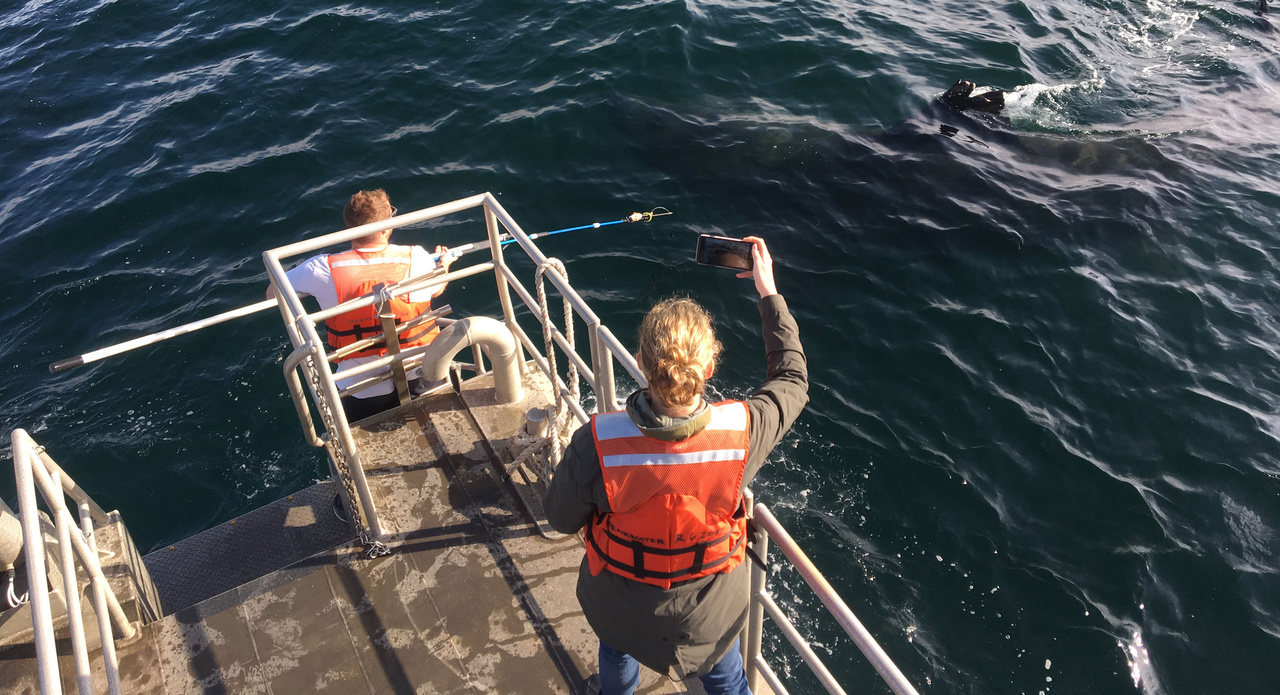 While tagging the sharks in April, Freedman’s team also gathered samples of their mucus, a slimy coating that contains their DNA. The genetic samples will provide invaluable insight into the relationships between sharks within the North Pacific and the rest of the world, and can help determine if shark fins sold on the market come from basking sharks.

The elusive nature of the sharks requires a collaborative approach among scientists at NOAA and the public to learn more about them. Thanks to these efforts, NOAA scientists are one step closer to learning more about these gentle giants.

Researchers are asking for the public’s assistance in reporting basking shark sightings. This information will be added to the sightings database and help teams gain a better understanding of where they may be able to tag additional sharks.

“The sanctuary is home to a number of really amazing open-ocean species and most people don’t realize massive basking sharks are right in their backyard,” said Freedman. “However, we urge the public to view these cool fish responsibly. The first shark we saw had obvious boat damage to its dorsal fin. We need help from communities to protect and support this species.”

The skittish and slow-moving sharks are most easily sighted in calm waters where they crisscross the surface, sieving up copepods as they go. Scientists urge boaters to use caution around the animals to avoid collisions. Recommended guidelines for boaters who see basking sharks include:

• Consider switching engines to neutral if closer than 100 yards

• Jet skis should stay 500 yards away

Researchers invite the public to contribute by reporting sightings, including the number and sizes of sharks they see.

Please report any sightings including the date, time, and location, as well as any comments to (858) 546-7023 or send an email to basking.shark@noaa.gov.