The Tale of the Migrating Mini-Jack

Physiologists Don Larsen and his colleagues are studying the physiology of the “mini-jack” to determine how hatcheries might be contributing to high rates of early maturation in male salmon. 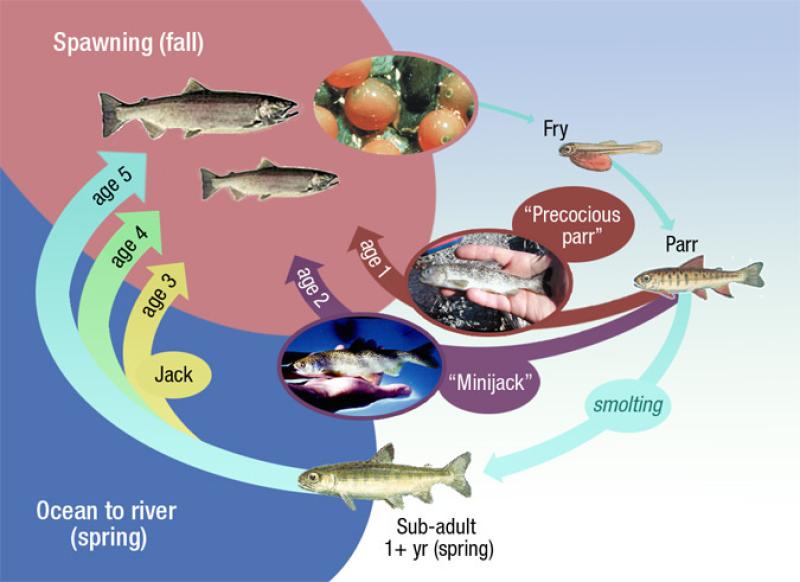 Each March, NWFSC scientist Don Larsen and his team sample over 1,000 Spring Chinook salmon from the Yakima River hatchery just prior to their release. From each male, Larsen is in charge of collecting plasma for analysis of 11-ketotestosterone (11-KT), a reproductive steroid produced by the testes of adult male salmon.

High levels of plasma 11-KT in juveniles at the time of release from the hatchery are one indicator of a precociously-maturing male—one that is destined to mature much earlier than its counterparts in a population.

Laboratory-based studies led by Penny Swanson of NWFSC’s Physiology Program helped pave the way for the NWFSC to develop the necessary tools for further study of the “mini-jack” in the field. Scientists Larsen, Brian Beckman, and University of Washington collaborators are using these tools to better understand the physiology of the mini-jack , and how hatcheries may be exacerbating early maturation in male salmon.

Spring Chinook salmon can spend anywhere from 1 to 5 years in the ocean before returning to their home rivers to spawn. After hatching from salmon eggs and approximately 18 months of growth in fresh water, juvenile fish migrate downstream undergoing the smoltification process in preparation for the ocean phase of their life-cycle.

Male Chinook salmon that return to their fresh water stream a year or two earlier than their counterparts are known as “jacks”. (Most Chinook salmon mature at age 4 or 5 after spending 2 or 3 years in the ocean.) Some males, referred to as “mini-jacks”, take even more of short-cut as part of their life history strategy, avoiding years of growth in the ocean altogether. Mini-jacks either remain in fresh water or favor a short-term downstream migration in fresh water, then head back upstream a few months later to reproduce at age 2.

Are Hatcheries Having a Mega Impact on Mini Jacks?

Early maturation in male salmon is a naturally-occurring phenomenon. Both genetics and environmental conditions (i.e., water temperature, food availability) can determine when a male sexually matures and can reproduce.

Larsen and his colleagues are testing to what extent hatcheries along the Columbia and Snake Rivers are contributing to a rise in the production of mini-jacks, as some studies have shown that the hatchery-rearing environment can cause early maturation more often than in wild populations.

These NWFSC scientists have been involved in studies of salmon life history at the Yakima River Hatchery since the program first started rearing spring Chinook salmon from wild broodstock in 1997. Each year, the program releases about 800,000 1+-year-old smolts, and anywhere from 3,000 to 10,000 (hatchery and wild) return each year as adults.

Larsen and his team tracked the mini-jacks using PIT (passive integrated transponder) tag detection systems, which can identify individually-tagged fish as they pass through dam fish passage ladders. His group has found that migrating mini-jacks are occurring at rates 10-20 times higher than observed in wild populations. An average of 40% of the male hatchery fish never migrate to the ocean, but rather mature early as mini-jacks.

More mini-jacks in the population can have negative genetic and ecological consequences on wild populations and other native species—including fewer male salmon migrating to the ocean, the loss of adults available for harvest or broodstock, and a skewed sex ratio in favor of more females in a population.