Team Removes Most Rope from Entangled Humpback Whale Off California 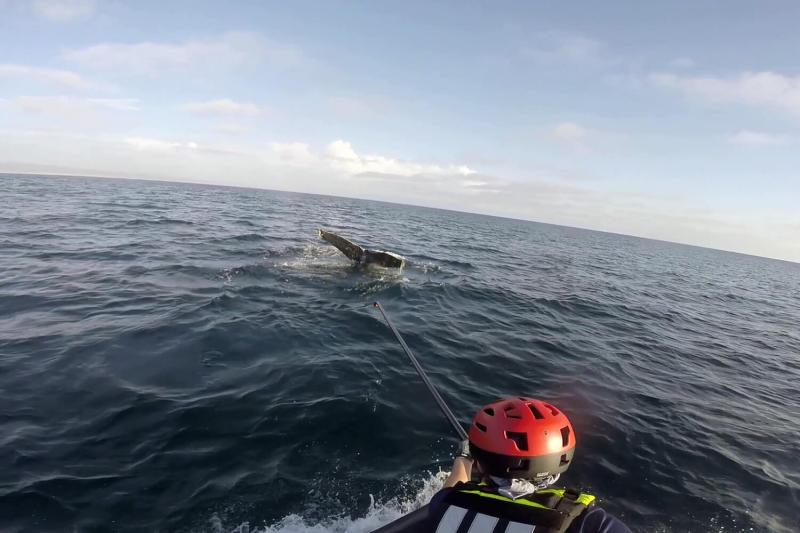 A team from NOAA Fisheries and the Pacific Marine Mammal Center approach an entangled humpback whale off Dana Point, California, on October 9. The team cut the whale loose from most of the ropes entangling it. Photo credit: NOAA Fisheries, MMHSRP Permit #18786-06

A team from NOAA Fisheries and the Pacific Marine Mammal Center removed most of the fishing line entangling a humpback whale. It was seen entangled near Dana Point in Southern California on October 9, 2022.

Whale watching boats helped locate and track the entangled whale. “We had a lot of help from many people and organizations, and that is what made this a success,” said Justin Viezbicke, California stranding coordinator in NOAA Fisheries’ West Coast Region. This is the third entangled humpback whale detected off Southern California in about 2 weeks.

Dana Wharf Whale Watching first reported the whale on October 8. They documented the entanglement with photos and video from drones, giving the response team a close look at the entangling ropes and related gear. That helped the team prepare their approach and strategy.

On Sunday around noon, Captain Dave’s Whale Watching located the whale again just outside of Dana Point harbor. Whale watching boats from Captain Dave’s and Dana Wharf monitored the whale for the next few hours. About 3 p.m., authorized entanglement response teams reached the whale’s location, by then just south of San Clemente pier.

The trained rescue team responded with one support boat and one inflatable to closely approach the entangled whale.

The response team removed all the trailing line and line from the tail. They were working on the line around the left pectoral flipper when the line snapped. About 20 feet of line continued to trail the flipper as the whale dove and picked up speed.

“Unfortunately some line remains on the whale,” Viezbicke said. “We hope that with most of the drag removed, the remaining line will come loose and the whale can shake it off on its own.”

“As we left, we looked back and could see the whale slapping its pectoral flipper, so hopefully it will shed the remaining gear,” Viezbicke said. The team hopes to get more sightings of the whale to see if the line comes off and to better understand the impacts of the entanglement.

The team could not identify the source of the fishing gear because it was just rope, with no buoys or other identifying features.

Only trained and authorized professional responders should attempt to disentangle or closely approach an entangled large whale given how risky such a situation is for the animal and rescue personnel.

If you see an entangled whale, call the West Coast entanglement hotline at (877) SOS-WHAL or (877) 767-9425. Note the size and species of the whale (if known), the location and date,, and any identifying markings. Take photographs from a safe and legal distance and from multiple angles if possible. That can help response teams plan their approach.

“That really helped us in this case,” Viezbicke said. “We had good documentation from the Dana Point whale watch community that came in with the reports, so we knew what we were in for.”