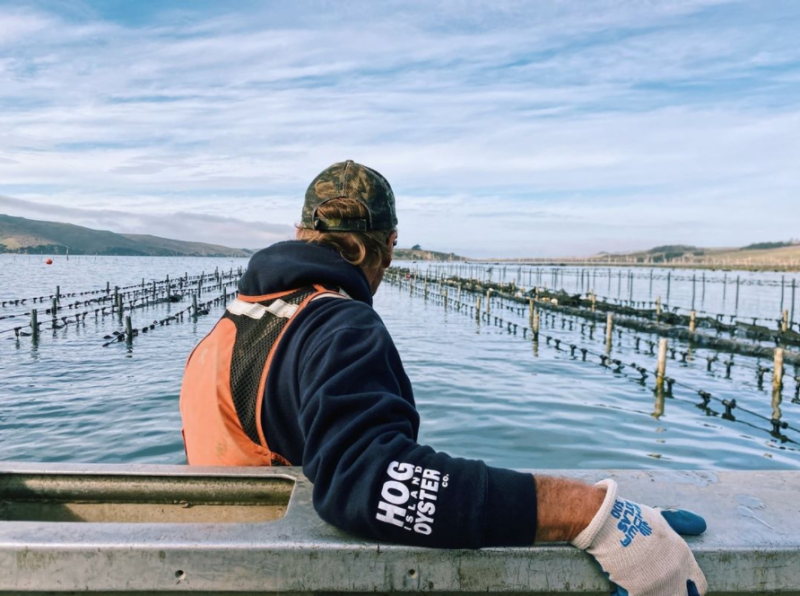 In California’s Tomales Bay, Hog Island Oyster Co. uses marine biology to sustainably farm shellfish. It’s a zero-input crop that is helping to restore the water quality of the bay.

The company founders are both marine biologists who focus on growing oysters in a manner that enhances the health of the ecosystem. Existing infrastructure is used when possible—many buildings from the 1860s and 1870s have been restored and incorporated into the farm.

“The health of the bay is looking much better, thanks to the oysters. They require no feed, fertilizer, or inputs, and use little fresh water, which in California is a big deal. We can conserve resources by producing more food that’s low on the food chain,” explains founding partner and CEO John Finger.

The company is a founding member of the Shellfish Growers Climate Coalition, which was formed at a time when hatcheries were having problems producing seed. As a result, business owners and farmers teamed up to find ways to mitigate the damage. Now, they share new technologies and keep each other informed on the impacts of changing water conditions. By working together, shellfish growers can help grow the industry to benefit local coastlines and communities in the face of climate change.

“On the ground,” states Finger, “we are seeing the effects. One of the reasons we have a hatchery is because as biologists, the rate of change is of concern. We are seeing the change in ocean chemistry as a problem that maybe we can get ahead of by breeding oysters.”

The company is committed to shortening its supply chain and having a positive environmental impact. About 80 percent of the farm’s energy is produced using solar panels. They are also increasing the number of hybrid vehicles in their fleet. In 2012, Hog Island began a partnership with the UC Davis Coastal and Marine Sciences Institute to monitor ocean acidification in Tomales Bay.

Finger defines sustainability in two parts. “One is keeping track of your inputs. The other is biodiversity. Water is everything to us. Oyster reefs make great habitats for lots of different species; we’re growing something that makes the local environment better.”

Currently, the farm grows oyster seed (which is also sold to other farms), hatchlings, and algae at their second site in Humboldt Bay, 5 hours to the north of Tomales Bay. In the past, Humboldt Bay was polluted by large paper pulp mills along the shoreline. But where the pulp mills once caused pollution, the farm's hatchery and nursery are growing shellfish that will eventually help filter the bay.

One half to two thirds of Hog Island’s seeds are sold to other growers in the Pacific Northwest and California. Finger says, “Across growers, we share information even though we are technically competitors. I haven't met demand in 38 years! We all end up being more successful when we share successes and failures.”

Hog Island specializes in single-seed production of oysters. The cost of labor is much higher because oysters are handled more and special equipment is needed to handle delicate spat. Seed costs are also higher because the hatchery has to hold them longer. On the plus side, growing for the half-shell market yields a product that is worth more money per oyster.

Originally, the farm sold exclusively through wholesalers. Over time, the farm started direct consumer sales on their property, with the future goal of opening a restaurant. Almost half of their revenue was from farm tours and visits, but the location was not suitable for a full restaurant. As they expanded their restaurant clients, the farm began to grow larger volumes of oysters and sell wholesale. Finger was approached by San Francisco’s Ferry Building with the opportunity to join their food hall. They pursued the opportunity and sales took off even further. Hog Island also acts as a distributor for other shellfish farms in the Pacific Northwest. Ultimately Hog Island produces 3 million oysters per year, but sells 6 million.

In addition to serving fresh seafood to patrons at the Hog Island Oyster Bar San Francisco, the farm offers oysters at various restaurants and markets. Hog Island Oyster Co. also offers shipping through their online store, local pick-up, an oyster-of-the-month club, even a traveling oyster bar for parties in the Bay Area.

States Finger, “We focus a lot on sustainability and biology, and growing these great oysters. But we really pride ourselves on our people. We have close to 300 employees, many have been with us for more than 20 years. We work hard and we want to make work fun, so I’m really proud.”

Until the late 1800s, the only oyster on the west coast was the Native Oyster, or Olympia Oyster. Native Oysters are very small and grow more slowly than Atlantic and Japanese oysters; over time, farmers chose to grow the other species. Starting during the Gold Rush, Native Oysters were overharvested and depleted, especially in the San Francisco Bay where silt from mining buried oyster beds. Along with the Native Olympia Oyster Collaborative, Hog island is working to restore this foundational species in the bay.

This recipe for Hogwash Mignonette, a twist on traditional oyster mignonette sauce, is a signature topping for raw oysters and Bloody Marys at all of Hog Island’s restaurants.