Together Again: White Sharks and Gray Seals Off Cape Cod

After decades without seeing many, Cape Codders now easily find seals and sharks together in warmer months. 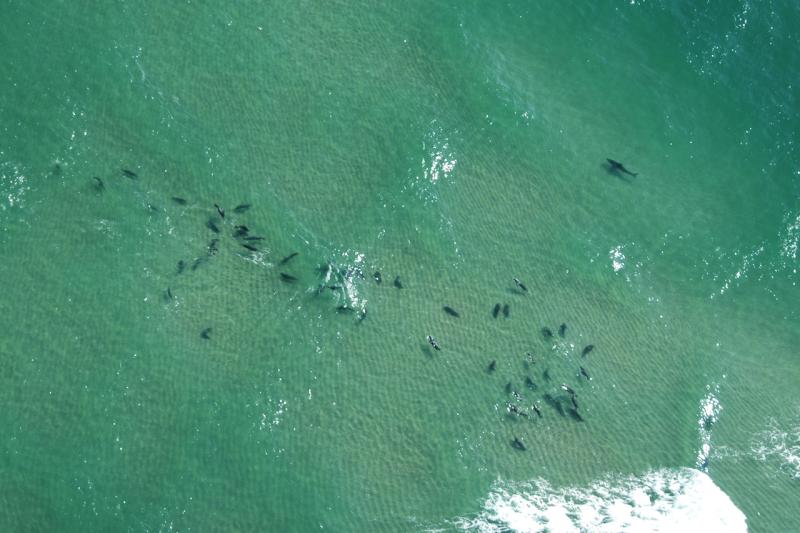 In 1975, the movie Jaws made “Cape Cod” and “shark” synonymous, even though white sharks were rare in these waters. Today gray seals are becoming equally associated with Cape Cod, although the once-resident populations were eliminated by the early 1970s. Now, sharks and gray seals share coastal waters off the Cape in numbers not seen in most of our lifetimes.

You might think that these two animals have nothing in common other than a “bitey” relationship, but think again. Adversity, resilience, and an important role in the ocean ecosystem bind them closer than predator and prey.

People have sought white sharks for their fins, teeth, jaws, meat, and as a trophy fish. From the 1880s until the mid-20th century, gray and harbor seals were numerous off New England. Both Maine and Massachusetts paid bounties for each one killed, as did places in Atlantic Canada. Although it’s hard to figure out the exact contributions of fishing, culls, and bounties to population numbers, it’s generally agreed that it wasn’t increasing them.

Domestic and some international laws protect white sharks and marine mammals like seals. Fishermen may hook a white shark, but must release it. The Marine Mammal Protection Act protects seals, as well as all other marine mammals in U.S. waters, from harassment, hunting, capture, or killing.

It’s hard to estimate how many white sharks are in our oceans, as they are relatively rare. Research shows that protections for sharks have likely improved their numbers, particularly in the Northwest Atlantic. For gray seals, the rebound is clear to the naked eye: once there were none, now there are several thousand living on Cape Cod shores. Gray seals now living on Cape Cod originated from larger Canadian herds, and have only recently started to again live on the Cape year-round.

Usual Prey off the Menu? No Problem

Both of these predators have an array of dining options. They just aren’t that picky. Off Cape Cod gray seals eat mostly sand lance, hakes, and flatfish. White sharks eat fish and (::ahem::) seals, as well as other marine mammals. Both will sometimes snatch fish off an angler’s line or a commercial fisherman’s gear.

We’d give the top spot to white sharks here. They much prefer a seal over fish by the time they are adults and you probably won’t read a “gray seal bites white shark” story anytime soon. That said, they are both top level-predators. Very few other animals are large enough and interested enough to rely on them for prey.

Top-level predators help keep an ecosystem in balance. When, where, and what they eat regulates the animals below them on the food chain. This directly affects the diversity of life and indirectly helps ocean plants and corals thrive.