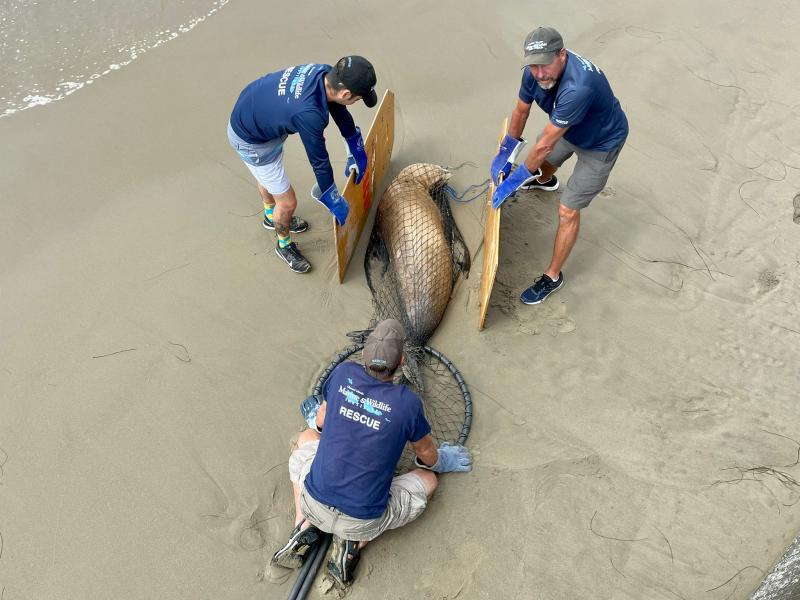 The rapid growth of harmful algae along parts of the Southern California coast is producing high concentrations of a toxin that affects California sea lions. It has ledto strandings of more than 60 of the marine mammals since mid-August. Many have acted erratically, suffered from seizures, and in some cases died.

Growth of the toxic algae Pseudo-nitzschia is expected to continue in coming days, according to forecasts from the California Harmful Algae Risk Mapping (C-HARM) system. The algae produces a neurotoxin called domoic acid, which accumulates in fish such as sardines, anchovies, and squid. The toxin then transfers to predators such as sea lions and birds that prey on the fish—causing seizures, brain damage, and sometimes death.

Seasonal outbreaks of domoic acid poisoning are common along the California Coast. Ocean conditions favoring the algae can rarely lead to more widespread outbreaks involving hundreds of animals. Seafood is regularly tested for domoic acid, which in humans can cause Amnesic Shellfish Poisoning.

NOAA Fisheries coordinates responses to the strandings through the West Coast Marine Mammal Stranding Network. Coordinators stress that beachgoers should stay clear of marine mammals, preferably staying at least 100 yards away while also keeping pets and children well away from the animals.

“These animals can be unpredictable and that makes them dangerous, so it’s critical to report them while also staying safe by keeping your distance,” said Justin Viezbicke, California Stranding Coordinator. “These conditions seem to be expanding along the coast so we can expect to see more animals with these symptoms.”

The Channel Islands Marine & Wildlife Institute has recorded 61 cases of stranded California sea lions with signs of domoic acid poisoning since mid-August. There were 45 in Ventura County and 16 in Santa Barbara County. Teams have collected samples from another 10 dead animals they suspect succumbed to domoic acid. Dover said the sea lions have shown various symptoms, including:

In some cases, the sea lions died. Last week, for instance, a disoriented sea lion suffered seizures on a crowded beach near the Ventura Pier and eventually died.

“Our extremely dedicated, skilled, and caring team of volunteers is working from sunrise to sunset responding to all of the sea lions and evaluating each animal individually,” Dover said. “Some animals are put under observation in a safety perimeter with educational signs and we monitor their symptoms. Some animals are rescued based on their condition. We are sending team members to these animals as quickly as possible and we appreciate your patience.”

Growth of the harmful algae depends on a complex mix of marine nutrients, temperatures and other factors, said Clarissa Anderson, Executive Director of Southern California Coastal Ocean Observing System, which monitors and models conditions that favor growth of the algae and production of domoic acid. She said the C-HARM model predictions show that the current algal bloom first appeared along the Ventura County coast, consistent with the first sea lion strandings. It is now spreading up and down the California Coast.

The latest SCCOOS forecasts show that the next several days could see high concentrations of domoic acid in a narrow band along the California Coast from near San Luis Obispo south to San Diego. View updates on the algal bloom