Researchers Gather Trove of Data on These Elusive Deep-Divers 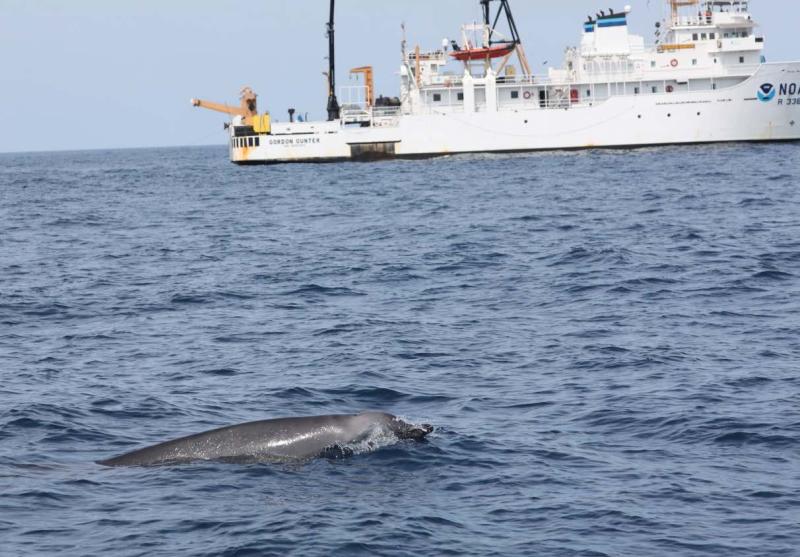 For a month this summer, researchers from the Northeast Fisheries Science Center and colleagues surveyed the waters south of Cape Cod along the edge of the continental shelf and farther offshore looking for True's beaked whales, a species about which very little is known.

On this cruise, however, researchers made what could be a beaked whale breakthrough, seeing or hearing multiple True’s beaked whales nearly every day they were in their primary study area, about 200 miles off Cape Cod. These whales are so elusive that they have rarely been seen alive, much less studied.

Danielle Cholewiak of the Northeast Fisheries Science Center’s Protected Species Branch at the Woods Hole Laboratory in Massachusetts is chief scientist for this research, creating a multi-institutional collaboration for this year's expedition involving researchers from nine organizations and a NOAA Teacher at Sea from South Carolina.

A Rare Look at a Rare Whale

The major target species for this survey was True’s beaked whale (Mesoplodon mirus), a largely unknown species worldwide. First identified in 1913 by Frederick W. True, the species has only been opportunistically documented since then. Trained whale observer teams have only recently had enough information to identify them on sight.

“Deep-diving cetaceans, such as beaked whales, are difficult to study due to their cryptic nature and their offshore distribution. But they are an important part of the deep-water marine ecosystem,” Cholewiak said. “Beaked whales are an extraordinary group of species, adapted for an extreme lifestyle. They dive to incredible depths to forage, and spend long periods of time deep underwater. They are sensitive to disturbance from a variety of human noise-producing activities. We need a better understanding of their ecology, habitat use, site fidelity, and population status to develop appropriate management strategies.”

Researchers used a variety of technologies to track and document the whales, deploying underwater microphones and collecting water samples that may contain bits of whale DNA. “Environmental DNA, or eDNA, is DNA left in the environment when an animal passes through it. It is an exciting tool that may provide a better understanding of species identity and population structure, just from sampling water,” Cholewiak said. A dozen eDNA samples were collected, paired with several biopsy samples and photo IDs to match them to specific animals.

An exciting accomplishment this year was tagging a True’s beaked whale with a suction-cup digital acoustic recording tag (DTAG), the first time ever for this species. The tag recorded the movements and acoustic behavior of the individual for over 12 hours, after which time it came off and was recovered so that the data could be downloaded.

“Most of what we know about the diving behavior of beaked whales comes from studies of only two species: Cuvier’s and Blainville’s beaked whales. Relatively few studies have been conducted on other species, particularly other Mesoplodon species,” Cholewiak said. “The data from this tag give us the first detailed glimpse into the underwater behavior of True’s beaked whales. We are excited about the new insights we can glean about this species.” 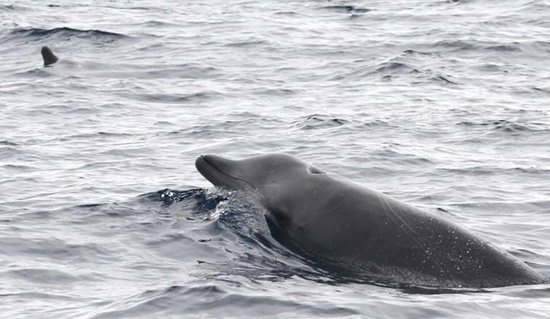 And then there is Elvis and Trident. Working in the main study area, the team tracked multiple groups of beaked whales for several days and took many photographs for identification. These two were re-sighted on two separate days, and are now the founding members of the True's beaked whale photo-ID catalog.

“We spent many long hours visually and acoustically tracking different groups of True's, gathering detailed information on their movements and surfacing behavior," Cholewiak said. “It was great to resight some of the same individuals on multiple days, giving us a bit more insight into their associations.”

The work conducted this summer builds on previous surveys in the program. “The deep-water areas off Georges Bank and near the Northeast Canyons and Seamounts Marine National Monument appear to be important habitat for True’s beaked whales, based on our sightings and acoustic recordings from our surveys in 2016 and 2017,” Cholewiak said. “The work this summer shows the same thing.”

A number of other species also live in this region, including Cuvier’s and Sowerby’s beaked whales, pygmy and dwarf sperm whales, and several species of dolphins. Endangered large whale species, including sperm whales, fin whales, blue whales and sometimes North Atlantic right whales, also use this habitat. While sperm whales were encountered regularly during this survey, an aggregation of fin whales sighted far offshore was a surprise to the researchers onboard.

Other data collection tools were tested on the cruise to find out if they could be used effectively when the study target is a deep diver. These instruments included a deep-water high-frequency acoustic recording package, drifting buoy recording systems, and a towed volumetric array.

Tried and true technologies also did the job. A team of visual observers were on duty during all daylight hours, documenting everything that could be seen. and a hydrophone array towed 24/7 from the ship was used to acoustically record whale and dolphin species in the canyons along the shelf edge from south of Cape Cod out to Bear Seamount to the edge of Browns Bank in the Gulf of Maine.

“We overlaid many different types of technology to learn as much as we could about this species and other species in the region in a short amount of time,” Cholewiak said. “It was fantastic to see it all come together.”

The effort was part of an annual survey in the Atlantic Marine Assessment Program for Protected Species (AMAPPS). In some years, the focus is on broad-scale surveys to assess the population sizes of all marine mammal species in our waters. In other years, the research focuses on collecting fine-scale data on particular species, like beaked whales. During these surveys, the survey crew also documents sightings of sea turtles and seabirds, this year sighting some surprising bird species, such as the red-tailed tropic bird.

AMAPPS is a collaborative long-term research and monitoring program involving the Bureau of Ocean Energy Management, the U.S. Navy, NOAA Fisheries, and the U.S. Fish and Wildlife Service. The program focuses on collecting seasonal data on the abundance, distribution, and behavior of marine mammals, sea turtles, and seabirds throughout the U.S. Atlantic Exclusive Economic Zone.