It's a record-smashing season for young salmon migrating through the Baker River in the North Cascades of Washington State. 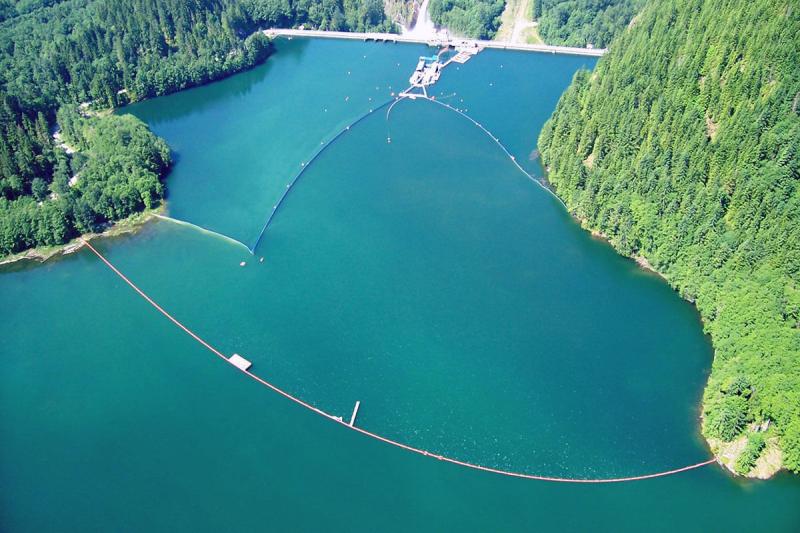 An aerial view of the floating surface collector on Baker Lake. Smolts swimming toward the collector (center, top) are guided by nets on both sides of the opening.

It's a record-smashing season for young salmon migrating through the Baker River in the North Cascades of Washington State. Fisheries crews have counted a staggering one million sockeye and coho salmon making their way to the Pacific Ocean. The fish just keep coming, and so do the records.

“We knew we’d get large numbers, but to break a million was a surprise to everybody,” says Doug Bruland, Fisheries Supervisor at Puget Sound Energy. “With over a million smolts out this year, we could potentially see 60,000 to 100,000 return as adults.”

These numbers are remarkable given that as recently as the 1980s the Baker River’s sockeye population was nearly extinct. The Lower Baker Dam, completed in 1927, and the construction of the Upper Baker Dam in 1958 blocked salmon and steelhead from reaching vital freshwater habitats. Downstream passage, in particular, severely impacted the survival of these fish runs, and by 1985, a mere 99 adult sockeye salmon returned to the Baker River.

To address poor downstream passage, NOAA Fisheries, along with additional federal, state, and tribal partners, worked with the owner and operator of the hydroelectric project, Puget Sound Energy, to design a means to pass salmon and other fish species downstream successfully. The collaboration resulted in an innovative fish passage system known as a “floating surface collector.” A barge moored in the reservoir anchors soft guide nets, which extend to each side of the lake and direct juvenile migrants into a facility where they are evaluated prior to being released downstream. Earlier generations of the floating surface collector, known as gulpurs, were significantly smaller and less effective at attracting large numbers of fish into the collector.

The newly designed floating surface collector was installed in Baker Lake in 2008 and sockeye and coho salmon began setting records. In 2010, over 522,000 fish were counted migrating downstream, followed by 287,195 and 545,419 in 2011 and 2012, respectively. Puget Sound Energy installed a second floating surface collector in Lake Shannon in 2013, which further bolstered the number of juvenile migrants, 827,274 to be exact. This year, however, the number of outbound juveniles has set yet another record—over one million salmon, predominantly sockeye but some coho as well, have just passed the Upper and Lower Baker dams on their seaward migration, a far cry from the numbers witnessed nearly 20 years ago.

“This is a remarkable achievement,” says Will Stelle, NOAA Fisheries West Coast Regional Administrator. “One million fish are headed to the Pacific because we’re engineering solutions that work. This wouldn’t have been possible in the not so distant past, but today Baker’s salmon runs are thriving because of these innovations.”

Floating surface collectors represent the next generation of fish passage technology. The records mounting at the Baker Hydroelectric Project speak to the success of these innovative systems. NOAA Fisheries fish passage engineers are pioneering many of these designs, and together with our partners, like Puget Sound Energy, we’re advancing sound solutions to protect fish while providing energy to local communities.

Update: In 2015, over 50,000 adult sockeye salmon returned to the Baker River. These returns are the result of the successful passage technologies installed at the Baker Project since the low returns of the 1980s.