Right whales have been seen in high numbers south of Cape Cod, in Cape Cod Bay. 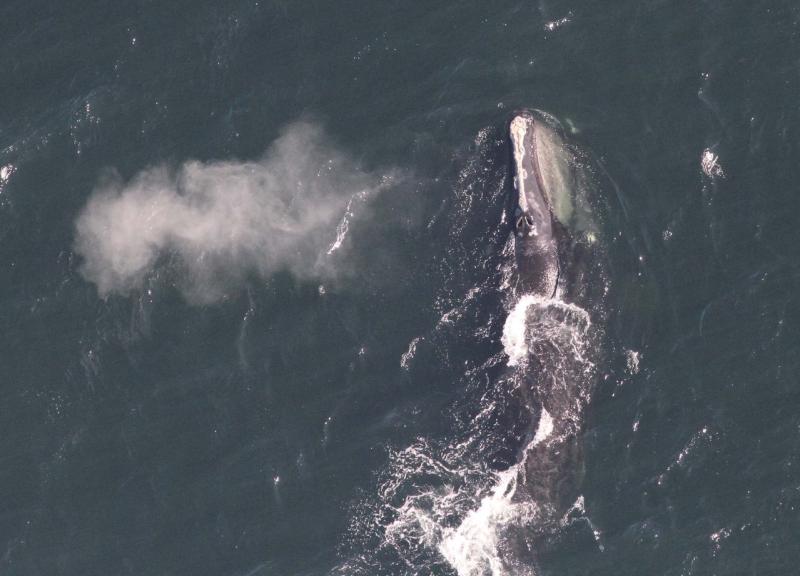 Whale researchers at the Northeast Fisheries Science Center (NEFSC) and colleagues are observing large numbers of North Atlantic right whales and other whale species in Northeast waters from aerial and research vessel surveys.

An aerial team aboard NOAA Twin Otter aircraft, flying for the Center out of the U.S. Coast Guard Air Station at Joint Base Cape Cod and from Hyannis, are continuing their long-term survey for right whales. The effort supports a range of research and is part of an annual seasonal distribution and abundance survey of protected marine animals along the East Coast.

Researchers began seeing right whales in the region in mid-November. As many as 158 individuals have been sighted on a single flight, often in aggregations of four or more.

“A very small portion of the right whale population heads south to the waters off northern Florida and Georgia in the winter, mostly just the moms to give birth,“ said Tim Cole, a marine mammal researcher and lead of the Center’s aerial whale survey team. “We try to determine where the rest of the population is and have found them so far this year in large numbers on Nantucket Shoals and in Cape Cod Bay.”

The Northeast Fisheries Science Center, New England Aquarium, and the Center for Coastal Studies jointly monitor the waters off New England for right whales. The whales tend to follow their food and are moving to different locations around the region as the season progresses. 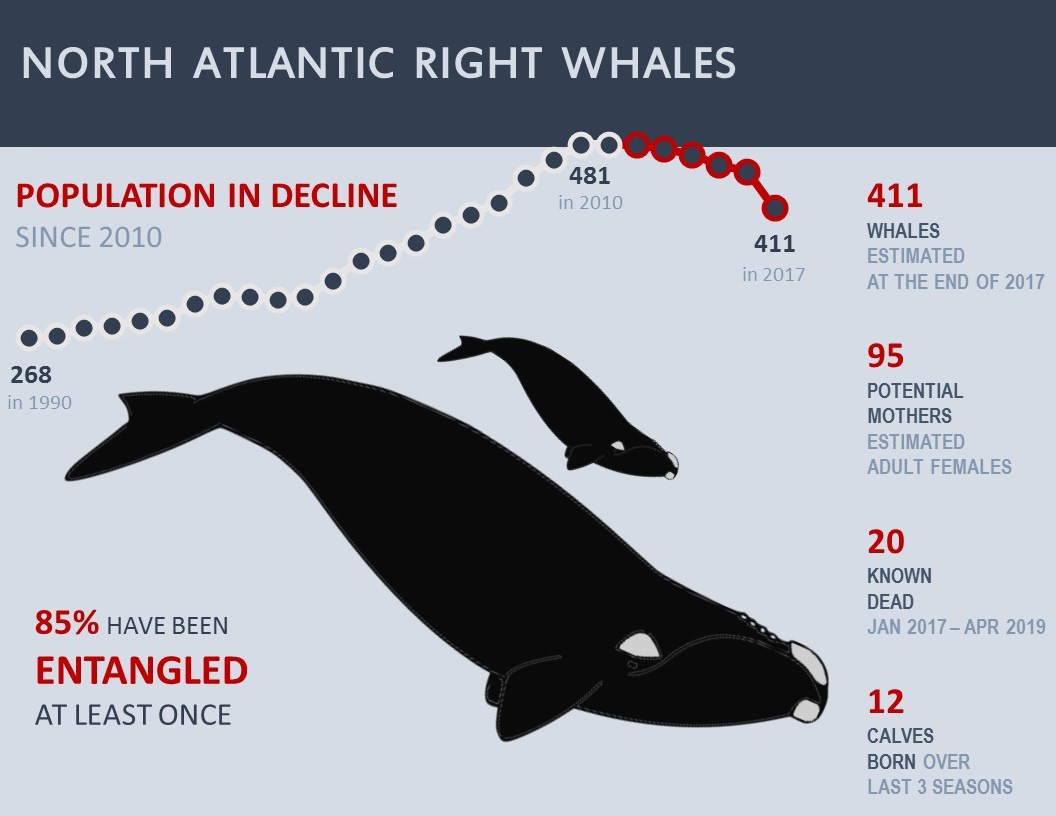 On April 6, NEFSC scientists on the Center's research vessel Selkie sighted the first right whale mother and calf pair of the season in Cape Cod Bay. That team is photographing whales and collecting small skin samples of whales not sampled before for population genetic studies, and was able to get a skin sample from the calf. On April 11 two more mother and calf pairs were sighted in Cape Cod Bay by the Center for Coastal Studies.

NEFSC researchers are also extending the aerial abundance survey into waters from Halifax, Nova Scotia to New Jersey, and sighting a number of species. That survey is part of the Atlantic Marine Assessment Program for Protected Species (AMAPPS) funded by NOAA, the Bureau of Ocean Energy Management (BOEM), and the U.S. Navy. Work began the first week of April and will continue through May 15, when colleagues in the Southeast will take over and survey the waters from New Jersey to Florida through June 30.

The goal of the AMAPPS surveys is to estimate seasonal distribution patterns and abundance of as many species of cetaceans (whales, dolphins and porpoises), sea turtles, and seals as possible.

Weather permitting, Cole and Center colleagues are conducting aerial surveys several times a week, specifically looking for right whales in the region. Flights are focused on areas where whales have been seen recently or in the past. Flights began in mid-March and will continue into mid-May.

After a short maintenance period, the team and the plane are off to Canada in June. There, they will assist with monitoring for whales in the Gulf of St. Lawrence. Until September, the crew will alternate their survey areas between U.S. and Canadian waters.

“We photograph each animal and then analyze the images to get a record of the numbers of individual animals here, how long they stay here, and what the population looks like in terms of males, females, and calves so we can follow the family tree, so to speak,” Cole said. “This year seven calves were observed in waters off the Southeast U.S. coast. Three right whale calves have been seen so far this spring in the Northeast.”

“The Northeast Shelf and particularly the Gulf of Maine and areas south of Cape Cod is a huge area to cover, so you can easily miss whales during these surveys,” Cole said. “We have intensified our efforts to observe and identify as many right whales as we can to determine the status of the population and assist in monitoring the health of individual animals.”

In addition to aerial surveys, NEFSC scientists Lisa Conger and Peter Duley are on the water, photographing right whales in Cape Cod Bay. They are aboard either the research vessel Auk, operated by the Stellwagen Bank National Marine Sanctuary, or the Center’s research vessel Selkie. Their photographs are used to identify individual animals, and if they get the chance, they gather other information, like collecting genetic samples from right whales that have not been sampled before. They will continue these efforts until May 3, when most of the whales are expected to have left the bay for other areas.