Archeologists studying Smuttynose Island in the Gulf of Maine uncovered the remnants of cod and other fish deposited by one of colonial America’s first fishing stations. Researchers are using these fish parts to learn more about fish and the ocean they lived in nearly 350 years ago. 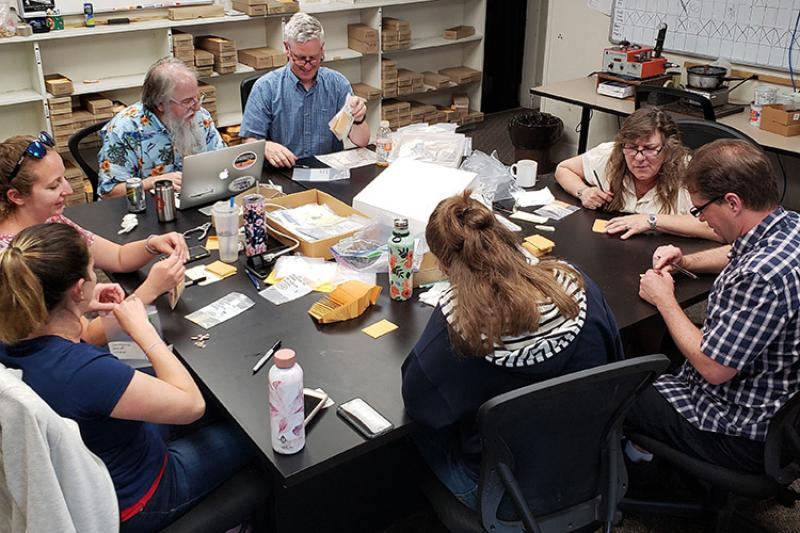 Northeast Fisheries Science Center researchers are engaged in a multi-year effort to create the information needed to maintain viable fisheries in a warming world ocean. Projects are underway to improve stock assessments, modeling, and surveys, and to understand the vulnerabilities of coastal communities to climate change.

One of these projects looks at today’s cod in a warming Gulf of Maine through the lens of a similar time more than 300 years ago, when there was rapid ocean warming after the “little ice age” of the 1500s. Researchers are using fish parts gathered from a recent archaeological excavation of the Smuttynose Island fish station.

The fish parts date from 1640 to 1708, when the Smuttynose fish station was most active. The best-represented years are about 1640 to 1660. This was a time of intense harvest in the developing fishery during rapid ocean warming that is similar to what is happening in the Gulf of Maine today.

Examining these old fish parts may reveal how cod responded to intense fishing and warming in the 17th century. It will help us better project outcomes for Atlantic cod in the future.

Smuttynose Once Ruled the Cod Trade

Smuttynose is one of several islands in the Isles of Shoals, which straddle what are now state waters off New Hampshire and Maine. Its earliest colonial residents arrived in the early 1600s from Ireland and the south of England for one reason. They wanted to strike it rich in what is sometimes called the “cod rush.”

Although the island was eventually part of the Massachusetts Bay Colony, the men—and only men, as women were outlawed in the early days—of Smuttynose were ruthlessly independent. They kept colonial authorities on both sides of the Atlantic at arm’s length. They stayed out of the triangle trades that handled fish from most of the colonies.

This worked because they had a superior product. Smuttynose cod commanded three to four times the price of salt cod from other colonial stations. Their influence was such that they often set the salt cod price for global competitors in the years before the American Revolutionary War.

When processing fish, the unneeded parts were thrown out the “trash door” of the processing house. The result was a pile of fish heads and bones, not to mention pottery pieces, pipe stems, and other objects.

Enter Dr. Nathan Hamilton, associate professor of archaeology at the University of Southern Maine. Hamilton first uncovered remnants of the Smuttynose fishing station in 2008, finding layers of fish bones and other artifacts. He used them to date the excavated layers back to the 1600s.

Among the fish parts were otoliths—a small, hard structure that floats in the ear canal just under the brain. This summer, scientists at the Northeast Fisheries Science Center examined some of the otoliths left behind by the men of Smuttynose Island. 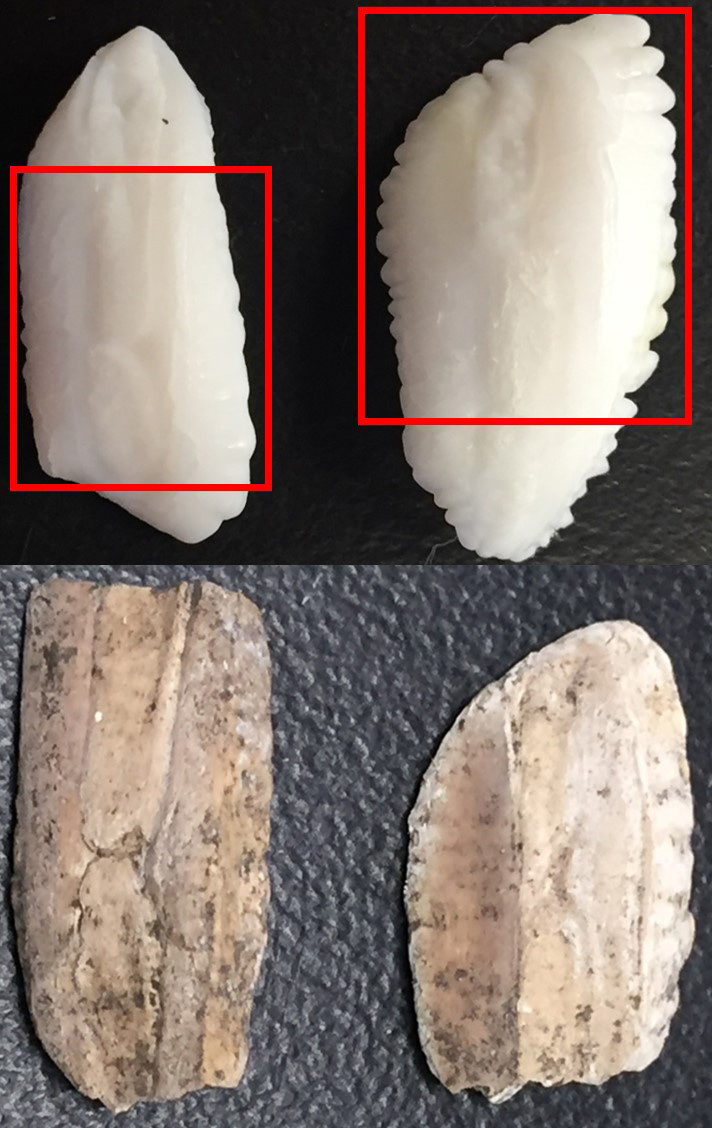 Present-day cod otoliths and their 17th century counterparts. The older samples are the remaining portion of otoliths shown in the red boxes on the modern otoliths. Photo: NOAA Fisheries.

All bony fish like cod have three pairs of otoliths. The name comes from the ancient Greek “oto” (ear) and lith (“stone”). They are often called earbones, even though technically they aren’t bones. These free-floating calcium carbonate structures help with balance and hearing. To age a fish, researchers use the largest of the three pairs of otoliths, called the sagitta.

Cornell professor Willy Bemis brought the otoliths to the science center lab, and the agers set about the first part of their work—examining each one and assigning it to a species. Most were from haddock and cod with a few pollock, a couple of red or white hake, and one cusk.

Despite their age, quite a few retained many of their identifying features. Looking through the dirt and erosion, the similarities between the older otoliths and present day samples were surprisingly easy to spot. Many could be identified to species, and even the heavily weathered ones could still be identified to family—the Gadidae.

After the otolith species were identified, several from cod were pulled aside. We wanted to see if the growth rings were intact enough to determine the age of fish from which they came. After all this time, the annual growth rings still had a fairly strong presence and could be confidently aged by cod-aging expert Nina Shepherd. The ages from this sample set ranged from 5 to 12 years old.

Why Is This Research Important?

A warming ocean is causing ecosystem change throughout the Northwest Atlantic, including the Gulf of Maine. This work fills important data gaps on demographics of groundfish species before the stock depletion of the modern era. Understanding these species’ responses to prior changes in climate and fishing can provide a way to compare current conditions with those of the past. It will also help us better understand the underlying drivers of change today.

How old a fish lives to be and when it starts to reproduce are important pieces of a larger puzzle that allow us to manage our fisheries. After aging the Smuttynose cod samples, we can see that some lived to be 12 years old back in the 1600s. That doesn’t mean that fish only lived for 12 years back then, but we now have some physical evidence of the historical stock’s age structure. 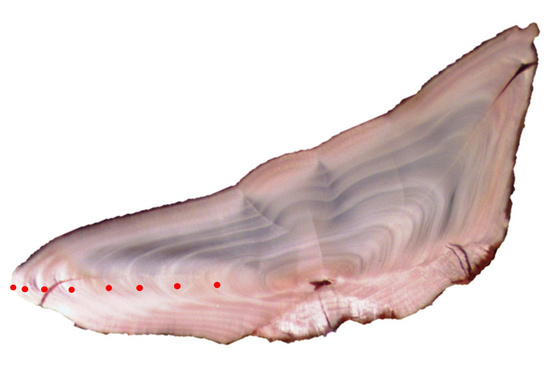 Cross-section of a 17th century cod otolith from Smuttynose Island. Each red dot is on a growth ring, one for each of the 8 years this fish lived. Photo: Courtesy Karin Limburg.

By looking at patterns within the otolith, we can determine how fast the fish grew and when it started reproducing. That information will be compared to today’s cod to see how growth and the size and age at maturity have changed.

The cross-section (right) shows 5 or 6 wide growth bands followed by 2 to 3 smaller growth bands. This suggests this individual matured at 5 to 6 years of age since growth slows after maturity.  In contrast, today’s cod in the region typically mature at 2 to 3 years of age.

Age and growth work at NOAA Fisheries is ongoing. Karin Limburg from SUNY College of Environmental Science and Forestry is also examining the chemical composition of some of the otoliths. These parts still retain many of the chemical constituents that were incorporated into them while the fish was alive.

Preliminary analyses suggest that not all Smuttynose cod had the same behaviors. Some appear to have been fairly stationary, while others appear to have made annual onshore-offshore migrations. Chemical composition may also reveal information on water salinity, ambient temperatures, and oxygen concentration.

Micro-milling of otoliths along growth bands may allow seasonal estimates of water temperatures the cod experience. They could also provide additional insights into the temperatures in the Gulf of Maine during the 1600s.

These samples may also reveal the effects of size-selective fishing—retaining certain-sized fish and discarding others—on cod over the past few centuries. This could help disentangle the relative effects of environmental conditions and selective fishing on the growth rates and maturation of cod in the Gulf of Maine. This is an important question for today's fishery and fishery management.