Many women play a vital but undervalued role in commercial fisheries around the world. A 2020 study showcases an innovative approach to bring women’s contributions to light. 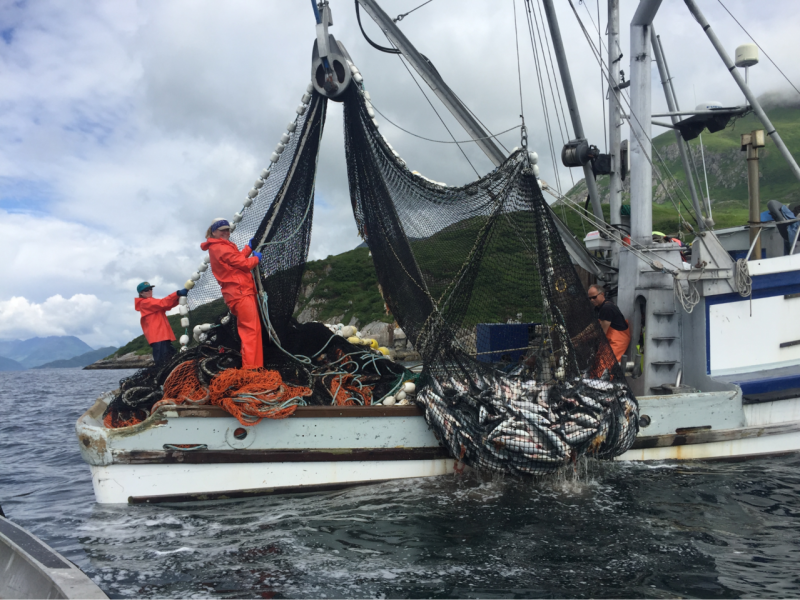 Theresa Peterson and her family haul in a catch of salmon off Kodiak, Alaska. Photo credit: Charlie Peterson.

NOAA fisheries scientists analyzed the current scientific literature on women’s fisheries participation worldwide. They looked at how women’s participation is tracked and identified information gaps. In response to data gaps identified during the analysis, they developed a new approach to explore women’s multifaceted engagement in commercial fisheries, which in some cases is increasing, in terms of the proportion of total participants. This may help ensure women’s contributions are better recognized in fisheries management and policy decisions.

Women play a key role in fisheries sustainability worldwide. They step in where they are needed, as crewmembers, marketers, shore support, managers, and political representatives. Yet women’s  engagement in commercial fisheries remains poorly understood and largely unrecognized in various parts of the world.

“Research on women’s engagement in fisheries has focused mainly on small-scale fisheries in developing countries. It is often based on qualitative case studies, due in part to the lack of gender information in quantitative fisheries data,” said Marysia Szymkowiak, the Alaska Fisheries Science Center scientist who led the study with coauthor Melissa Rhodes-Reese. “In this study we focused on women’s participation within commercial fisheries in North America and Europe. First, we systematically examined the literature on that participation to identify the themes about how it is discussed and the methods that are applied to examine it. We then developed an approach that couples qualitative and quantitative methods to comprehensively examine women’s participation.“

Across the study countries, the literature review revealed that women’s participation in fisheries is strikingly similar.  Women’s engagement is heavily influenced by caregiving and domestic responsibilities.

Women participate differently than men in fisheries. Those differences can diminish their status and empowerment in fisheries. Gender-blind fisheries data and management policies that are not informed by gender-specific data can inadvertently exacerbate the problem. For example:

“The single biggest void in the literature on fisheries participation is the lack of gender in harvest data,” said Marysia Szymkowiak, the Alaska Fisheries Science Center scientist who led the study.

“We developed a way to integrate gender into existing fishing data so that we can track women’s direct participation as harvesters. We combined that information with data from focus groups to understand dimensions of participation that are not captured by harvest data alone, such as participation in management, paperwork, and marketing activities. This mixed-methods approach provides a powerful tool to explore the multifaceted nature of women’s fisheries engagement.”

The researchers demonstrated the new approach by applying it to Alaska’s valuable and varied fisheries.

In Alaska, detailed harvest records including fish landings and revenues have been collected since the 1970s. The team used the free R software packages Gender and genderizeR to predict harvester gender with greater than 90% accuracy from only first name and birth date. They used this to examine women’s participation as crew and permit holders from 1993-2017. 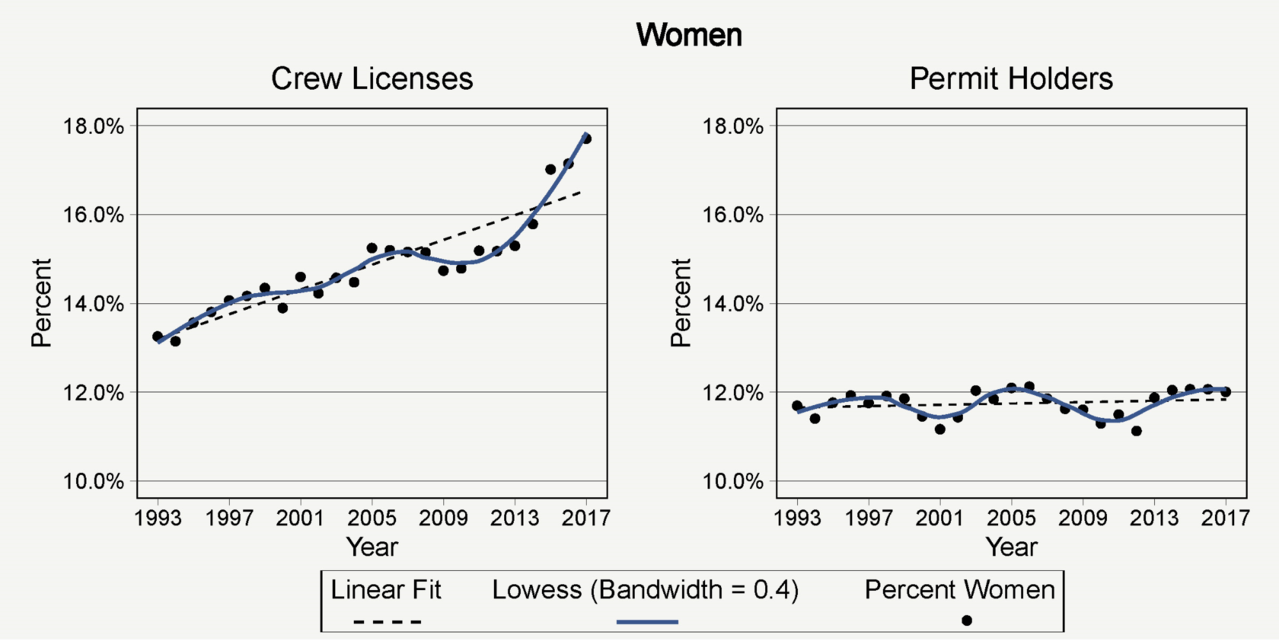 Incorporating gender into historical Alaska fisheries data revealed that women represented a marginal proportion of permit holders from 1993-2017. However, their participation as crew has increased over the time series and at an accelerated rate in recent years. Image credit: NOAA Fisheries

Their results showed that men continue to dominate as both crew and permit holders. However, women’s participation in terms of the proportion of total crewmembers has increased over time while men’s has decreased and at an accelerating rate over the last few years.

“Exploring what that means for the future of increased access to fisheries or the inherent mobility of women’s roles in fishing families will require further research,” Szymkowiak explains. “For example, the increase may reflect the evolution of cultural norms to allow women greater participation as crew. Or it may capture women’s adaptive roles in fishing families, replacing paid crew in difficult economic times. Both of which were discussed in focus groups that I held throughout Gulf of Alaska communities (the results of which are available here). What is clear is that the ability to predict gender can reveal disparities in the ways in which men and women participate in fisheries and guide us towards a better understanding of how women may be differentially impacted by environmental or management changes. These differences underscore the need to track women’s access and mobility in fisheries.”

These quantitative methods illuminated patterns of direct fisheries participation. To explore the many other dimensions of women’s engagement, Szymkowiak conducted focus-group discussions in a variety of Alaska fishing communities. The groups explored topics encompassing themes in the global literature on women’s participation, including:

Women’s experiences in Alaska fisheries echoed those of women involved in fisheries around the world. The dynamic ability to respond to change that makes women key to fisheries sustainability can also be a barrier to their direct harvest participation, as they respond to family situations and their resulting intermittent participation makes them less likely to qualify for harvest privileges.

By integrating gender into fisheries data, the new approach illuminated disparities in participation and dimensions of engagement in Alaska. Szymkowiak and Rhodes-Reese hope it is only the beginning of greater gender awareness in fisheries around the world.

“We want to see gender information collected as a key variable in fisheries data,” Szymkowiak said. “By presenting evidence of how profoundly gender affects fisheries participation and the benefits that flow out of that, we hope to move toward future fisheries and social policies that are aware of women’s roles rather than gender blind.“