An undergraduate research voyage in the Caribbean with SEA Semester presents a perfect opportunity for scientists from NOAA's Northeast Fisheries Science Center to continue their research on humpback whales. 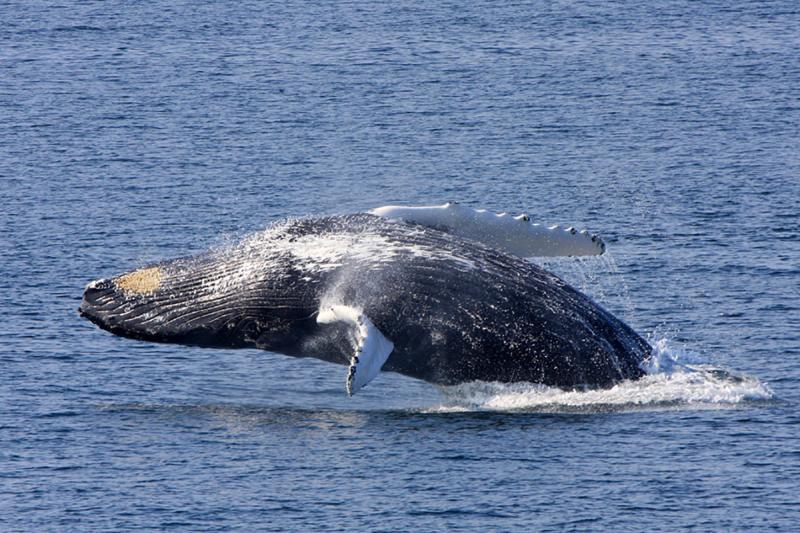 An undergraduate research voyage in the Caribbean with SEA Semester presents a perfect opportunity for scientists from NOAA’s Northeast Fisheries Science Center (NEFSC) to continue their research on humpback whales.

For the past six years, a scientist from the NEFSC’s marine mammal acoustics group has joined one of the annual at-sea portions of a Sea Education Association (SEA) course. This year, the Colonization to Conservation in the Caribbean course will include Genevieve Davis, a marine mammal scientist in the passive acoustics research group at the Center’s Woods Hole Laboratory.

As a guest scientist, Davis will work with SEA Chief Scientist Jeff Schell and 20 students aboard the SSV Corwith Cramer to record underwater sounds from whales in the area. Recordings will also be made of ocean noise at reefs along the islands visited (Puerto Rico, St. John, Dominican Republic, the Bahamas, and Jamaica) and at the Silver Bank Humpback Whale Sanctuary as part of Davis’ soundscapes of the SEA voyage.

“It’s an opportunity for those aboard the ship to learn more about the marine mammals we see,” said Davis, who works on baleen whales sounds and ocean noise at the NEFSC, “and it’s an opportunity for me to record humpback sounds in the region, which is otherwise a challenging location to get to.”

College students participating in the spring SEA Semester program began the six-week onshore component of the course in Woods Hole on January 2. The at-sea portion begins February 13 and will take the ship from San Juan, Puerto Rico to St. John in the U.S. Virgin Islands to the Dominican Republic, the Bahamas, Jamaica, Grand Cayman, and Key West, where the voyage will end March 23.  Davis will spend about three weeks aboard the vessel, disembarking in Jamaica to return to Woods Hole.

Along the way students will learn about the history of the islands through various historical accounts, conduct snorkel-based coral reef surveys and field-based observations, and learn about the legacies of colonization and modern challenges from local experts and citizens.

Humpbacks migrate to an area known as the Silver Bank north of the Dominican Republic in the winter during breeding season. Recording there will provide additional information for a program at the NEFSC, the Caribbean Humpback Acoustic Monitoring Program. The Silver Bank is part of a larger area known as the Sanctuary for the Marine Mammals of the Dominican Republic.

The vessel will carry a hydrophone, an underwater microphone, and Davis will bring additional recording equipment. Students will deploy the hydrophone each day, plug in speakers and listen live to the sounds and structures of songs of humpback whales and other animals in the area, then analyze them as a group. Sound will also be collected during coral reef activities to add to the NEFSC’s ocean soundscape collection.

Davis met with the students in late January during the classroom component of the course to talk about marine mammals and sound, ocean noise, and what they would be doing at sea. Four of the students have specific projects related to the sound studies as part of their coursework. One of those students participated in the Partnership Education Program in Woods Hole in 2016, and is interested in marine mammal conservation and the impacts of ocean noise.

“This is a great hands-on learning opportunity, and I am looking forward to working with college-age students,” said Davis, who has worked in classrooms with students of all ages. Most recently she worked with the NEFSC’s educational outreach program on protected species aimed at grades K-5 and as a teaching assistant in UMass Boston’s Marine Invertebrates lab with undergraduate students.

Davis has a B.S. in biology from the State University of New York at Binghamton. She is currently working toward her PhD. in environmental biology at the University of Massachusetts Boston, focusing on baleen whale distribution and movements. She first came to the NEFSC as a NOAA Hollings Scholar working on North Atlantic right whale calling behavior across seasons in the Center's passive acoustic research group. After graduation from SUNY Binghamton she joined the acoustics team as a research analyst focusing on baleen whale acoustics.

“Getting out into the field to collect data and observe first hand is always very rewarding,“ she said. “We have so much more to learn about marine mammals and their environment, and it is important to pass along an awareness of the world around us.”