A description of the different types of Endangered Species Act consultations and when to use them. 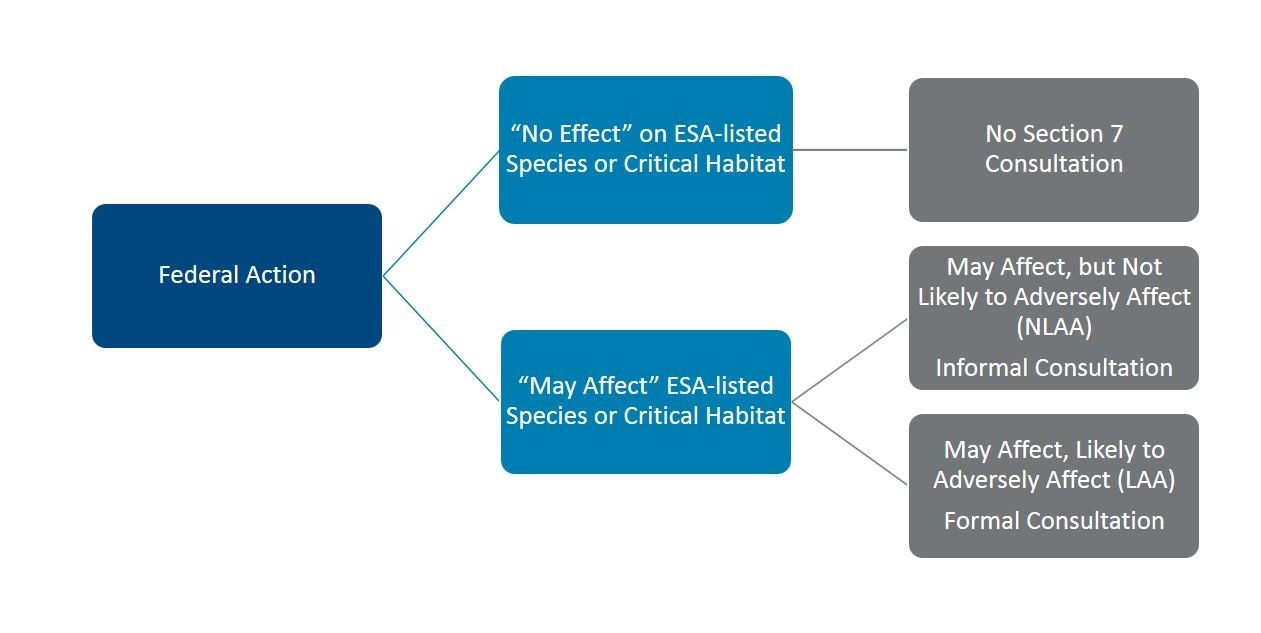 No effect means there will be no consequences to listed species or critical habitat that result from the proposed action, including the consequences of any activities that would not occur but for the proposed action. These terms are defined in our section 7 regulations at 50 CFR §402.02 and in other guidance on our website.  Some examples of when a “no effect” determination is appropriate are:

Additional guidance on "No Effect" determinations

Under section 7 of the Endangered Species Act, federal agencies must consult with NOAA Fisheries when any action the agency carries out, funds, or authorizes may affect either a species listed as threatened or endangered under the Act, or any critical habitat designated for it. If the Federal agency taking the action (referred to as the “action agency” under section 7) determines that the project is Not Likely to Adversely Affect (NLAA) listed species and/or critical habitat, they submit an informal consultation request to NOAA Fisheries (referred to as the “Consulting Agency under section 7) for concurrence. NOAA Fisheries will provide a Letter of Concurrence to the action agency if it agrees with the action agency’s NLAA determination. NOAA Fisheries will provide written concurrence or non-concurrence with the Federal agency's determination within 60 days once they receive enough information to make a determination. Once the concurrence letter is issued, the consultation process is terminated, and no further action is necessary. An NLAA determination is the appropriate conclusion to be made when effects on ESA listed species and/or critical habitat are expected to be discountable (extremely unlikely to occur), insignificant (so small they cannot be meaningfully measured, detected or evaluated), or wholly beneficial (ALL effects benefit the species and/or critical habitat).

This information should be submitted to us along with a letter making a “likely to adversely affect” determination, that requests formal consultation. Your consultation request will be assigned to a section 7 biologist and the assigned biologist will review your request for consultation and contact you by phone or email if more information is needed. Once all the necessary information is received, we will send you a letter stating that we have all the information necessary to initiate formal consultation. The biologist will then draft a Biological Opinion, including an Incidental Take Statement (as appropriate). The ESA section 7 regulations require us to provide a final Biological Opinion to you within 135 days of consultation initiation. The date of initiation is calculated from when we receive ALL the necessary information to complete formal consultation (e.g., all project specifics included, action area correctly defined, all stressors have been adequately addressed, all effects analyzed, etc.). This timeline can be extended if both agencies agree more time is needed. If a third party is proposing the action as an applicant, the third party must also agree to an extension. Please note that special procedures are required for “major construction” projects, including the preparation of a Biological Assessment (see 50 CFR 402.12, or Contact Us for more information).

Sometimes after completion of consultation, the project changes, a new species is listed, or critical habitat is designated or revised while the project is ongoing. Other times, take occurs when not exempted, or other relevant new information becomes available (e.g., new research on geographic extent of a species range). Each of these scenarios may result in the need to revise the effects analysis in the Biological Opinion or in an informal consultation letter. Reinitiation of consultation is required and shall be requested by the Federal agency or by us, where discretionary Federal involvement or control over the action has been retained or is authorized by law, and:

Trigger 1 typically only applies to formal consultations that include an Incidental Take Statement (ITS) within a Biological Opinion, but, if take resulted from an action where it was not exempted and included under an ITS, reinitiation is required immediately. If a project changes, the action agency staff member should contact the section 7 biologist who wrote the consultation letter and/or Biological Opinion. Staff should discuss the changes and the potential need for reinitiation before submitting a request for reinitiation. Reinitiation is not always required if the project changes; the changes need to result in the level and/or type of effects to rise beyond the level and/or type of effects that have previously been considered in the consultation. If reinitiation is necessary, the action agency must send us a letter (following the guidelines for requesting consultation) requesting reinitiation of consultation. The request should contain an assessment of the effects of the modified action on listed species and/or critical habitat. If the new determination is that the modified action is “not likely to adversely affect” listed species or critical habitat, an analysis must be provided to support the determination and submitted with a request for our concurrence. If we concur, we will send back a letter which will complete the reinitiated consultation. However, if the modified action is likely to adversely affect listed species and/or critical habitat, then formal consultation is required, and a Biological Opinion will need to be produced (see Formal Consultations for more information).

A programmatic consultation is a consultation addressing an agency’s multiple actions on a program, region or other basis. A programmatic section 7 consultation can achieve several objectives with positive administrative benefits for both the action and consulting agencies.  A programmatic approach streamlines the procedures and time involved in consultations for broad agency programs or multiple similar, frequently occurring, or routine actions with predictable effects on listed species and/or critical habitat, thus reducing the amount of time spent on individual project-by-project consultations. Although this process may initially take time to gather data for all the activity types that may be included under the programmatic program, the end result is that workloads are streamlined and significantly reduced in the long run.

To view examples of programmatic consultations, see our Reporting webpage.

The Endangered Species Act recognizes the need to respond immediately to emergencies. We expeditiously process emergency consultations so Federal agencies can complete their critical missions in a timely manner while still providing the protections afforded to listed species and critical habitat under the ESA.

Where emergency actions are required that may affect listed species and/or their critical habitats, a Federal agency may not have the time for the administrative work required by normal consultation procedures under non-emergency conditions. Emergency consultation allows rapid communication between agencies and provides the Federal agency the ability to incorporate endangered species concerns into their emergency response plans.

An emergency is a situation involving an act of God, disasters, casualties, national defense or security emergencies, etc., and includes response activities that must be taken to prevent imminent loss of human life or property. Predictable events, like those covered in Emergency Use Permits issued by the Environmental Protection Agency for pesticide applications, usually do not qualify as emergencies under the Section 7 regulations unless there is a significant unexpected human health risk. During any emergency, NOAA Fisheries’ primary objective is to provide technical assistance and recommendations for minimizing adverse effects to listed species during the emergency response activities. During emergency events, the primary objective of the responding agency is to protect human life and property and this objective takes precedence if there is a conflict with protective measures for listed species under the ESA. The protection of ESA-listed species and designated critical habitat is warranted when it will not interfere with the emergency response to protect human life and property.

Return to the GARFO Section 7 Homepage