Testing the efficiency of different sweep types on fishing nets was the focus of twin trawling operations August 18-28 aboard the F/V Karen Elizabeth from Point Judith, RI. The target species: summer flounder, with red hake and winter flounder a secondary priority. Summer flounder, also known as fluke, is a flatfish that tends to stay on the ocean bottom. A valuable commercial and recreational fishery, it is found in offshore waters in the winter and in inshore waters throughout the summer.

Sweeps are different types of gears attached along the bottom of trawl nets that help determine the efficiency of nets to target different types of species and on different types of bottom. For example, sweeps with big rubber disks called rockhoppers, like those used on the federal fisheries surveys on the NOAA Ship Henry B. Bigelow, allow nets to be towed over rocky uneven seabeds. Chain sweeps allow the net to fish “hard to the bottom” and are most efficient for flatfish and other bottom dwelling species because they flush fish from sandy and muddy seabeds, but cannot be towed over complex bottoms because they can hang up on bottom structure.

“These studies are all about understanding the efficiency of our survey gear,” said John Manderson, a fisheries biologist in the NEFSC’s Oceans and Climate Branch and chief scientist of the study. “How do different sweep types compare for certain kinds of fish, during the day and at night, and by size? Not all flatfish behave the same.” 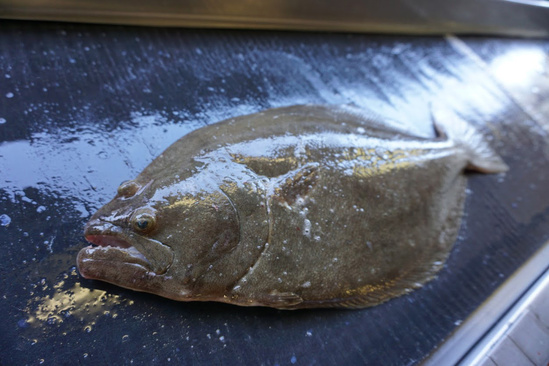 This sweep efficiency experiment, like those conducted in 2015 on yellowtail flounder and in August 2016 on winter flounder and American plaice, was recommended by the Northeast Trawl Advisory Panel, which is a joint advisory panel for the Mid-Atlantic and New England Fishery Management Councils that is composed of fishermen, scientists and managers. Northeast Fisheries Science Center (NEFSC) scientists and the fishing industry are both interested in better understanding the catch efficiency of standard bottom trawl survey fishing gear to improve stock assessments. The results of this experiment will be used to refine the research survey-based estimate of summer flounder population abundance, which will then be used in the 2018 benchmark summer flounder stock assessment. The data for other species captured in the study will also be available to help improve many other NEFSC assessments.

Chris Roebuck and his four-person crew aboard the 78-foot western-rigged stern trawler Karen Elizabeth conducted this year’s study with five staff members from the NEFSC’s Northeast Cooperative Research Program and the Fisheries Ecology and Oceans and Climate branches. The team targeted summer flounder in Southern New England from Montauk, Long Island to Nantucket and red hake in the western Gulf of Maine off Cape Ann, making a total of 103 good tows and collecting over 73,000 fish from species targeted by the study.

The twin trawl study means two trawls as close as possible, one as a control and the other the experiment, are towed through the same body of fish at the same time. Both trawls use the Bigelow survey nets, one with the 16-inch rockhopper sweep as used on the Bigelow and the other the industry-designed chain sweep that drags across the bottom.

Like previous sweep efficiency studies, many of the data collection protocols used aboard the 209-foot NOAA Ship Henry B. Bigelow on its spring and fall bottom trawl surveys were used on this 10-day survey: 20 minutes towing time, constant towing speed between 2.8 and 3.2 knots, constant gear contact with the sea bottom, and net performance evaluation instruments indicating gear is operating within normal protocols. Operations were conducted 24 hours a day. Target species and other flatfish were sorted, weighed and measured and returned to the ocean as quickly as possible to reduce mortality.

Timing was key for the 2016 study. The witch flounder data was audited and analyzed by a collaboration of scientists from the NEFSC’s Oceans and Climate Branch, Ecosystems Surveys Branch and Population Dynamics Branch, written up as a working paper and presented at the mid-September data workshop – all within three weeks of the at-sea experiment. The model meeting followed in October, and the stock assessment was held in December.

For fishermen that made a huge difference. “It led to a 91 percent increase in the quota for witch flounder this year,” said Roebuck, who has worked with Manderson since 2011 on a variety of studies, including the 2016 witch flounder study. “It showed that the numbers were underestimated. By working together, we can make a difference.”

Lengths of fish sampled from the 103 tows will indicate any variation in the efficiency of the two sweeps with respect to the size and age of the targeted fish. This data can be important in adjusting estimates of abundance for the different fish size and age classes. Manderson, for example, analyzed the data being collected as the survey progressed and knew they needed bigger fish at night in the summer flounder data, so they targeted that size when they fished off Nantucket.

Preliminary results for this year’s study reveal a few surprises. Some very small fish, particularly yellowtail flounder, windowpane flounder, and red hake, were caught much more often in the chain sweep than in the rockhopper. During the day, the efficiency of the rockhopper sweep increased with the size of the fish for several species. For some tows at night, it was about 50 percent efficient and did not vary with the size of the animals, a finding that may be linked to animals coming up off the bottom at night to feed. Another surprise was the decline in rockhopper efficiency for some fish larger than 50 centimeters, or about 20 inches, something Manderson cannot yet explain.

“I want to help make the science better and understand what the data means and how it is used,” Roebuck said of his involvement in the sweep studies. “There are mismatches between what fishermen see and what the scientists are saying based on their models. We need to close that gap and get current data from studies like this into the stock assessment process as soon as possible.”

For Andrew Lipsky, acting chief of the Northeast Cooperative Research Program, collaborating with commercial fishermen like Roebuck is the key to the future. “The more we tap into their expertise and knowledge the better we can understand the ecosystem,” said Lipsky. “We are rebuilding the cooperative research program to get more and better data into our stock assessments, and building tools that allow fine-scale data gathered by fishermen to not only contribute to better understanding but to help fishermen fish more efficiently. We do great science at the NEFSC and we do better science when we work collaboratively with the fishing industry.”